Visit the location where Washington resided as president in Philadelphia, when the Genet Affair took place. Today, the site is operated by the National Park Service. 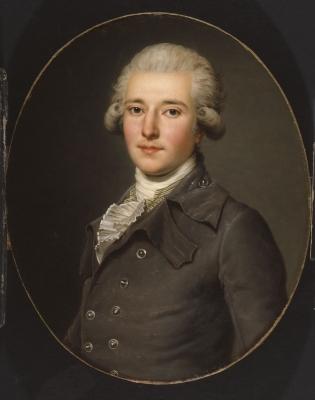 Edmond Charles Genet was a French diplomat sent to the United States during George Washington's first term as president in 1792. He planned to have Americans attack the British and Spanish in North America, countries then at war with France. Genet’s actions, known today as the Genet Affair, created a major controversy in foreign affairs at a time when Washington had pronounced American neutrality.

The son of a minister in the French Bureau of Foreign Affairs, Genet was introduced to diplomacy at an early age. In his first experience with the Americans, he went to the French port of Brest where he studied the language of American and English sailors in order to create a dictionary for use by French sailors in the American War of Independence. He was appointed a lieutenant in the French army, but hostilities had diminished before he could be sent to war. Instead, after his father's death in 1781, Genet was appointed to the same position his father held as head of the translation department in the French Ministry of Foreign Affairs. In 1783, Genet was sent to London to gather information on England's commerce for use in the Treaty of Paris that ended the American Revolutionary War.

After years of diplomatic missions across Europe, Genet returned to France in 1789 and became editor of a prominent Parisian newsletter, Le Patriote Francais. With the storming of the Bastille in July 1789, the French Revolution would come to define Genet’s career. In 1791, he was elected to the newly formed National Assembly as a member of the Girondins, the conservative party in power at the time. In two years, however, the revolution in France became more radical and support grew to execute King Louis XVI. Genet led the charge against the king's execution, supporting his exile to the United States instead. Yet Genet was called for his own special mission to the United States before he could intervene on behalf of Louis, who was eventually executed in January 1793 as the more radical Jacobins took power in France.

On April 8, 1793 Genet arrived in Charleston, South Carolina, to promote French interests to the United States government, as France had become embroiled in war with Britain and Spain. His mission was to reinstate the alliance between France and the United States and to "liberate" Spanish America and British Canada either as independent states or to America. His arrival was met with grand receptions in Charleston. His ultimate destination was the capital in Philadelphia, but first he planned to travel up the southern states to ascertain public opinion toward France in advance of his meeting with President Washington. Before leaving for Philadelphia, he arranged four privateers to raid British shipping off the American coast. Genet wanted a partnership, or at least approval for his actions, which had been ordered by the French government. He hoped he could receive funding as repayment for French debts incurred during the American Revolution. What Genet did not immediately know is that Washington had proclaimed American neutrality in regard to the war between Britain, France, and Spain shortly after his arrival.

Genet arrived in Philadelphia on May 18 and first met with Secretary of State Thomas Jefferson, whom he knew was sympathetic to the French cause. Although Jefferson was pro-French and disagreed with Washington's neutrality policy, he was upset with Genet’s violation of American laws. Genet was discouraged by Jefferson but persisted nonetheless, apparently with a serious misunderstanding of the American political system, as he believed Congress possessed all diplomatic powers. After deliberating with Jefferson and Alexander Hamilton, Washington reaffirmed American neutrality to Genet, and demanded that he not hire more privateers, cancel his plans to invade British and Spanish territory, and return the goods privateered by his ships. Washington asserted that these actions were in violation of American neutrality, yet Genet insisted that privateering and selling the goods in American ports was within his rights by the 1778 Treaty of Amity and Commerce. Washington's advisors John Jay and Rufus King publicly denounced Genet for his actions in August 1793. Genet then wrote personally to Washington to explain his intentions and clear his name: "Certain persons, actuated by views which time will develope, despairing to attack my principles, have descended to personal abuse—In hopes of withdrawing from me that esteem which the public feel and avow for the representative of the French republic."1 In Genet’s mind, anti-French members of Washington's cabinet were seeking to sabotage him.

After consulting with his cabinet, Washington asked the French to recall Genet. It was feared that Genet would incite a pro-French coup against the government by appealing directly to the people. The French acquiesced because they feared losing American favor when they needed access to American ports and goods. Washington wrote of Genet in a 1793 address to the Senate: "It is with extreme concern, I have to inform you, that the proceedings of the person whom they have unfortunately appointed their minister . . . here have breathed nothing of the friendly spirit of the nation which sent him; their tendency has been to involve us in war abroad, discord and anarchy at home."2 Washington's response caused a divide in his cabinet along pro-British and pro-French lines. Genet was recalled in January 1794 but was granted political asylum by Washington when Genet’s Jacobin replacement called for his arrest and deportation to France.

Genet married New York Governor George Clinton's daughter Cornelia on November 6, 1794, and retired to her farm on the Hudson River. After her death in 1810, he married Martha Osgood, the daughter of Washington's postmaster general. He lived the rest of his life out of the public eye as a farmer in New York. The couple remained married until his death in 1834.

2. U.S. Cong. House. A Message of the president of the United States, to Congress, relative to France and Great     Britain: delivered, December 5, 1793.: With the papers therein referred to.: Published by order of the House of Representatives. By George Washington. 3rd Cong. Doc. (Philadelphia: Childs & Swaine, 1793). iii-iv.