In the early summer of 1857, genre painter Eastman Johnson and fellow artist Louis Remy Mignot arrived at Mount Vernon. Johnson's connection to the Estate was personal as well as professional; that August his father Philip C. Johnson would marry Mary Washington James, a Washington-family descendant. Perhaps aware of the impending nuptials, John Augustine Washington III warmly welcomed the painter into his home. As the artist's wife recalled, Johnson "became his guest and they passed quite a hilarious evening."

Four decades later, Johnson recollected his purpose for the trip, explaining, "I painted a number of other things there in the summer, 1857, mainly in view of painting a larger picture of Washington himself at Mount Vernon, with his people about him and Lafayette his guest. But I didn't carry it out." Painter Louis Remy Mignot ultimately took up the "larger picture" that Johnson described, collaborating with Thomas Rossiter on the massive, seven-foot-high by twelve-foot-long Washington and Lafayette at Mount Vernon, 1784, a grand historical fiction celebrating George Washington as southern gentleman returned home from the Revolutionary War to spend idyllic days with family and friends. By contrast, the "other things" Johnson painted were a small-scale work depicting the Mansion and outbuildings as seen from the north, two additional views of the Tomb and grounds, and a kitchen interior.

While Mignot and Rossiter's canvases followed contemporary convention by placing George and Martha Washington in imagined scenes enjoying pristine grounds and interiors, Johnson's compositions offered somber and intimate depictions of everyday life on the Estate. As such, these subtle works are extraordinarily valuable documents testifying to the buildings' rapidly deteriorating condition and the presence of enslaved workers living at Mount Vernon just prior to its purchase by the Mount Vernon Ladies' Association.

Johnson is thought to have executed at least six variations on the theme of Kitchen at Mount Vernon between 1857 and 1865, suggesting the subject matter—an enslaved woman and children seated before a large hearth in an unlit, crumbling interior—resonated strongly with pre- and post-Civil War viewers. By contrast, Johnson's one exterior view of the Mansion, The Old Mount Vernon, was not widely known during his lifetime. Since that time, recognition of this quiet masterpiece has grown significantly. 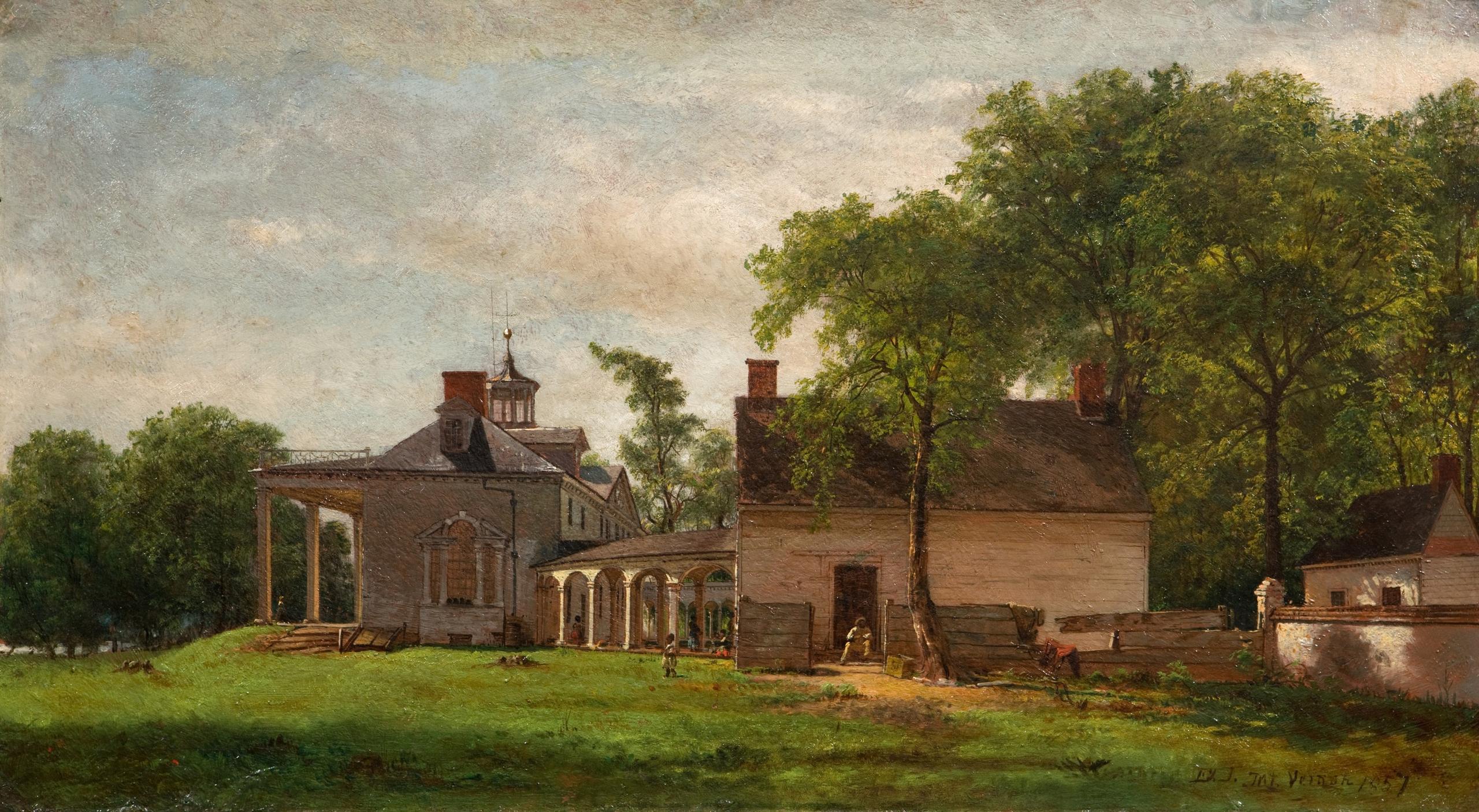 Signed and dated by Johnson the year of his visit—one year before the Mount Vernon Ladies' Association purchased the Estate from John Augustine Washington III—The Old Mount Vernon is an unusual and visually striking record of life at Mount Vernon. Almost all early images depict the Mansion's east or west facades, often in three-quarters view to allow the building's breadth and depth to be seen and suitably framed by the landscape. Johnson instead chose a vantage point to the north placing the Servants Hall closest to the viewer and making it as large as the Mansion when seen in perspective. Indeed, the house, with its north and west sides in shadow from the easterly sun, seems to be turning away from the people and activities nearby; the two buildings occupy separate spaces, linked only by the slender, delicate pilasters of the colonnade. A lone enslaved male in white clothing seated in the dependency's dark open doorway is an almost overlooked focal point.

If George Washington's home was interpreted as an embodiment of the man himself, then he is largely absent in Johnson's vision. In his place, the painter opted to give the viewer visual access to a side of life at Mount Vernon that was all but invisible to guests and visitors. This alternate reality is one of unimproved buildings and grounds, where very little productive activity takes place—everything almost seems to be at a standstill. The image provides an invaluable record of the Estate's physical condition while also yielding insight into the growing, powerful interest among Americans nationwide to preserve Washington's home.