Explore the Old Chamber and the other rooms of the Mount Vernon mansion through this 360 degree tour.

George and Martha Washington viewed hospitality to guests as a vitally important aspect of life at Mount Vernon. 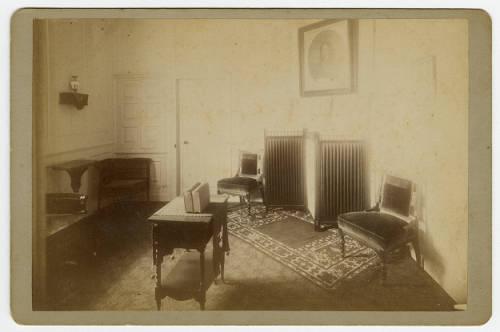 As the Mount Vernon Ladies Association’s (MVLA) larger interpretation of Mount Vernon has evolved since its possession of the mansion in 1860, so have the decoration and furnishings of the first floor bedchamber—which the Washington’s knew as the “Old Chamber.” The MVLA’s goal has always been to keep the rooms within the mansion “as Washington left them.”1 In the early years of the MVLA’s ownership of Mount Vernon, limited funding and resources prevented the MVLA from extensively decorating the Old Chamber. By the early 1880s, the MVLA began renovating the room; but in doing so, it added antique Colonial Revival style furnishings and interpreted the space as Martha Washington’s Sitting Room. As the MVLA developed new research standards and professional practices in the early twentieth century, it affirmed the historical function of the Old Chamber as a bedchamber during George Washington’s life. In the following years, curators and professionals at Mount Vernon moved furniture and decoration to and from the room in their attempts to restore the room to its original 1799 appearance.

After acquiring the mansion, the MVLA found empty rooms, apart from a few pieces of furniture that Mount Vernon’s previous owner, John Augustine Washington III, had left behind.2 From 1867 to 1874 MVLA founder Ann Pamela Cunningham used the Old Chamber as a personal bedchamber.3 After she resigned, the Old Chamber became open to the public, and the MVLA quickly moved to restore, “preserve, and beautify” the space.4 In 1883, the MVLA assigned the room to the Vice Regent for Georgia, Mrs. Philoclea Eve, who interpreted the space as “Mrs. Washington’s Sitting Room.” Mrs. Eve was unaware of the probate inventories taken after the Washingtons’ death, as she explained in her 1883 annual report to the council; there was “no record of what furniture was used by Mrs. Washington.”5 Mrs. Eve selected furniture and decorations that she believed best represented the Washingtons’ style of living and relied heavily on trends of the Colonial Revival, buying antique pieces and hiring individuals to produce colonial-style furniture. She also purchased two volumes of the History of Georgia to be displayed in the room. 6 These changes did not go unnoticed. In 1886, a reporter for Harper’s Weekly expressed his disappointment in the room’s “crimson Brussels carpet and plush-trimmed furniture of unmistakable modernness.”7

Just three years later, the MVLA began to standardize the finishes of the room interiors. In the Old Chamber the damaged floorboards were replaced and stained “to resemble the other floors in adjacent rooms.”8 In 1889 the MVLA requested that the room be “dispose[d] of such articles as are deemed too modern to be in harmony with the other rooms of the mansion.”9 However, while acquiring new objects to refurnish the room, the Vice Regents sought out a mixture of original and antique furnishings. An old mahogany workstand that belonged to “‘descendants of Washington’s kinsmen who fought with him at Morristown’” was placed in the room, alongside an antique glass candle-screen that the Vice Regents procured from a Georgia woman and a silver candelabra given by an Alabama woman.10

In the early twentieth century, the MVLA continued efforts to accurately represent the furnishings of George and Martha

Washington. Though the Old Chamber was still interpreted as a sitting room rather than a bedchamber, by 1912 the room contained original Washington articles: a card table, mirror, silver candlestick, and a series of four prints of the siege of Gibraltar.11 Relics previously displayed in cases against a wall in the Old Chamber were moved out of the room in “an effort to make [Mount Vernon] seem more like a home.”12

By the 1940s, increased tourism and the professional practices of historic museums like Colonial Williamsburg pushed the MVLA to enhance Mount Vernon’s historical accuracy. Vice Regent for Massachusetts Mrs. Mary Abigail Coolidge, chairman of the Furniture Committee, presented the MVLA with documentary evidence, including visitor accounts to Mount Vernon from 1797, that confirmed the Old Chamber had been “furnished and used as a bedroom.”13 After this, the room was finally interpreted as a bedchamber. A large secretary desk and smaller bookcase were moved out and placed in the library and music room respectively.14 To furnish the newly interpreted bedchamber, the MVLA moved in furniture from other rooms of the Mansion including a bed from the Vice Regent for Tennessee, Mrs. Mary Curton Van Deventer, a small chest of drawers from the Yellow Room on the second floor, and a dressing glass from Mrs. Washington’s Dressing Room. The MVLA expected to introduce other articles 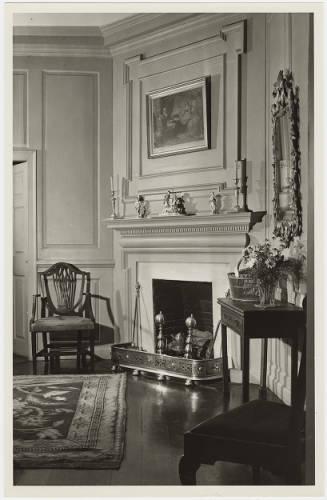 into the room, including brocade upholstery for the arm chair, but hesitated to include new items “until we have had museum advice as to its appropriateness for a bedroom.”15 A letter from Superintendent Charles C. Wall to Coolidge expressed the public’s overall acceptance of “this change of a major room without any apparent perplexity or adverse criticism.”16

The MVLA employed museum professionals to conduct further historical research and analysis of the Old Chamber in 1980. Matthew John Mosca, paint historian and architectural conservator, completed a thorough investigation of the architectural finishes for all the rooms of the Mansion including the Old Chamber. Using the most advanced techniques available at the time, Mosca analyzed the sequence of paint layers found on different elements in the room and compared his findings to documentary evidence. Mosca then proposed a paint scheme of Prussian blue walls, black baseboards, and grain-painted doors which were then replicated in the space.17 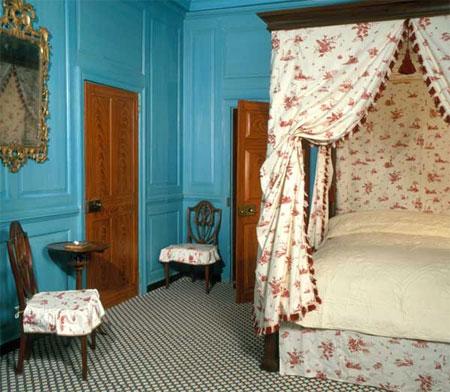 closely with the 1800 inventory and new research on eighteenth-century furnishings. Curators placed period pieces in the room representing the original furnishings including a historic bedstead with reproduction copperplate printed cotton hangings, and a small mahogany table, together with several original Washington items of blue and white Chinese porcelains and a Washington-owned painting, The Battle of Minden (courtesy of Washington and Lee University).18