The bond between George Washington and Lafayette was so strong that some have described them as more like a father and son, rather than a commanding general and his top-ranking officer.

Learn about the top ten objects in Mount Vernon's collections, including a key to the Bastille that Lafayette gave to Washington. 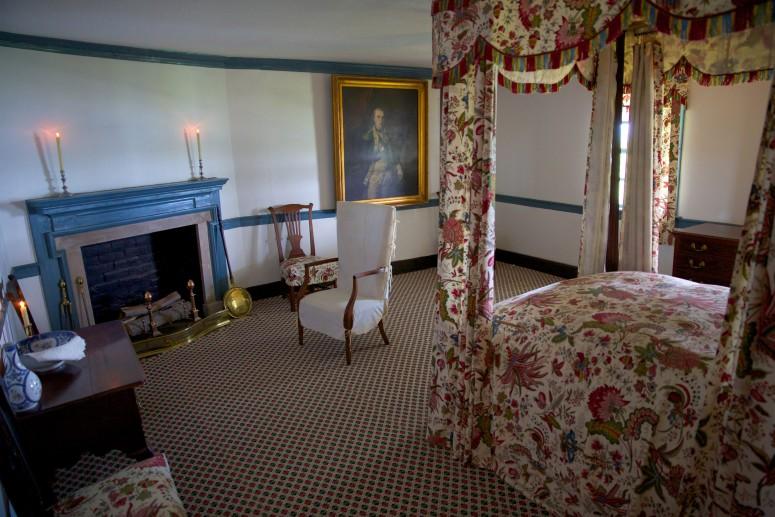 Marie-Joseph Paul Yves Roch Gilbert du Motier, the Marquis de Lafayette was a well-loved French general, a celebrated hero of the American Revolution, abolitionist, and a beloved friend of George Washington. Washington and Lafayette’s correspondence attest to their high regard for each other, with Lafayette seeing 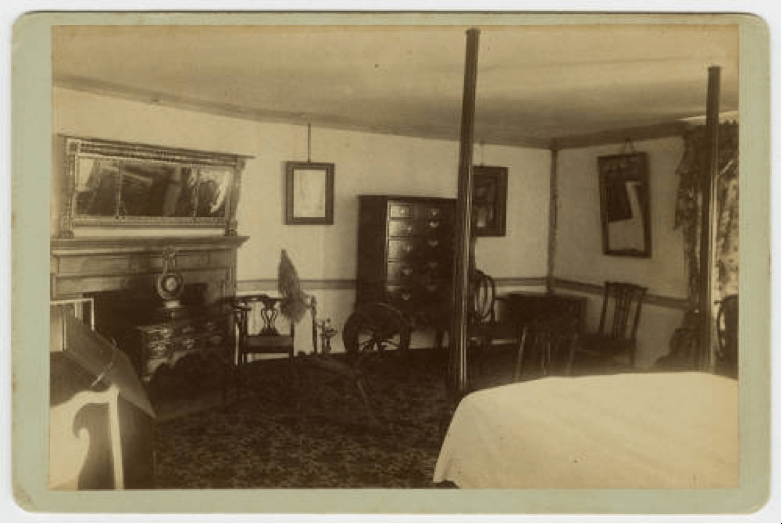 Washington as an adopted father. Washington commissioned a portrait of Lafayette in 1779 to hang at Mount Vernon, and after the Revolution, Lafayette paid an extended visit to Mount Vernon in 1784.1 Lafayette’s identity, being a man of two worlds, shaped both societies’ views of him. His influence would extend past the eighteenth century: during World War I, after American soldiers came to aid France, Colonel Charles E. Stanton gave a speech at Lafayette’s tomb and is credited with the famous phrase “Lafayette, we are here!’2 The MVLA took pride in being able to pay homage to Lafayette’s presence at Mount Vernon.

After the American Civil War, Mme. Lily M. Berghmans (later Mrs. Lily M. Laughton), Vice Regent for Pennsylvania, was given charge of the northeast chamber on the second floor. Treated as a spare room, this chamber, titled the Pennsylvania 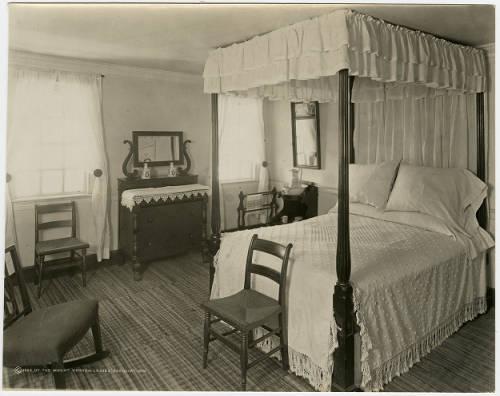 Room, stored a variety of miscellaneous furniture pieces, such as a spinning wheel. Mme. Berghmans furnished the rooms with period furnishings and, when possible, included items owned by Washington, but not necessarily original to the estate.3 The MVLA furnished each room based on limited resources. When they acquired the estate, few original pieces of furniture remained in the house.4 In 1881, the Vice Regent for West Virginia, Mrs. Ella B. Washington, discovered a sign reading “River Room” hung above the Pennsylvania Room door.5 Shortly after this discovery, the interpretation of the chamber changed to the River Room, with Mrs. Laughton now acting as the Regent.

Throughout the late nineteenth century, furniture was continually added to the River Room. This included pieces from well-known members of the founding generation such as former President of Congress Elias Boudinot and Benjamin Franklin.6 Additionally, two renovations occurred in a twenty-year span. In 1899 the walls of the River Room were whitened with calcimine and the wood trim was painted.7 Damaging cracks in the walls and ceilings, as well as a loose mantel and cornice, required repairs in 1912.8 Cracks would continue to plague the River Room ceiling throughout the twentieth century. 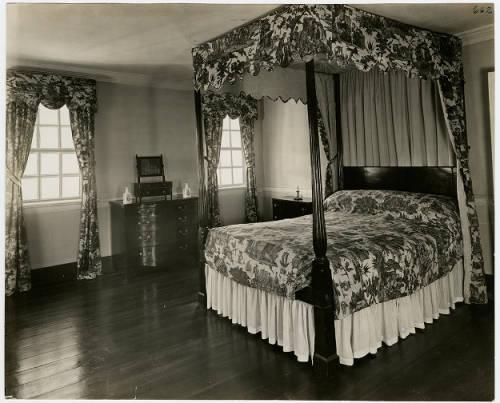 The chamber went through few changes in the early twentieth century, until the 1930s, when debate ensued within the MVLA, regarding the actual location of the Lafayette Room. The 1940 Minutes of Council confirmed the rediscovery of a detailed 1796 memorandum, from Washington’s farm manager, naming the northeast bedchamber as the room the Marquis de Lafayette had inhabited while visiting Mount Vernon in 1784.9 This information not only influenced the layout and interpretation of the River Room, but also of the northwest chamber on the second floor, which had previously been interpreted as the Lafayette Room.

After 1940, the pace of renovations to the Lafayette Room increased 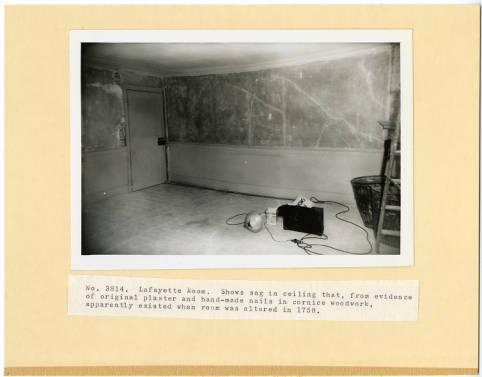 dramatically. In the 1950’s cracks to the ceiling resulted in extensive renovations and required three layers of plaster. The renovation revealed a sagging ceiling and damage to the north wall due to the chimney of New Room being bound against the bricks of Lafayette Room chimney. 10  By the 1970’s furnishings in the Lafayette Room had deteriorated, and new pieces were created, including textiles made from materials sent from Paris. The MVLA was particularly concerned about the condition and appearance of the room, with French officials and dignitaries expected to attend Son et Lumiere, a light show, at Mount Vernon, in 1976.11 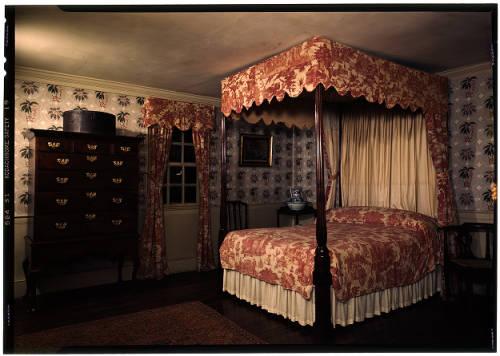 While the layout of the room continued to evolve over the last quarter of the twentieth century, the latest renovation occurred between 2001 and 2002. Most of the work focused on textiles, covering the hardwood floors with more historically accurate reproduction carpeting and replacing the bedding.12 In the twenty-first century, the Lafayette Room continues to be a significant feature of Mount Vernon.