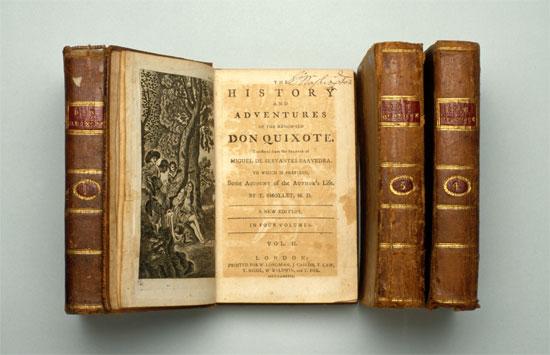 George Washington spent the summer of 1787 in Philadelphia presiding over the Federal Convention that struggled for four months to draft the Constitution of the United States of America. On September 17, 1787—the very day that the Constitution was adopted—Washington bid farewell to his fellow delegates. On the same day a far less momentous event occurred, though one that gives insight into Washington's interests at the time; he paid a bookseller 22 shillings, six pence in Pennsylvania currency for The History and Adventures of the Renowned Don Quixote, Translated from the Spanish Miguel de Servantes By T. Smollett, M.D. Smollett's translation was originally published in 1755, but Washington owned an edition published in 1786.

Washington took his copy of Don Quixote with him when he left Philadelphia the following day and the volumes soon found a place in his Mount Vernon library. Although Washington's nine hundred volume library included a number of works of literature, this seventeenth-century Spanish allegory does seem a somewhat unusual choice for the pragmatic farmer, soldier, and statesman. An explanation for the apparently uncharacteristic purchase can be found within Washington's correspondence.

Among the letters that Washington received in 1787 are several from Don Diego de Gardoqui, Spain's ambassador to the newly formed American republic. Gardoqui's principal mission was to secure favorable terms in a treaty between the United States and Spain to govern trade along the Mississippi River. Letters written to his superiors in Madrid reveal a shrewd diplomat who understood the importance of winning over George Washington, the man who was to become President, should the bold experiment of the Constitutional Convention succeed.

In 1785 Gardoqui assisted in delivering a Spanish donkey from Charles III, King of Spain, "Royal Gift," that Washington wanted for his plan to breed mules at Mount Vernon. His next gift to Washington was to be a Spanish edition of Don Quixote. The two men dined together on September 11, 17871, where Don Diego steered the conversation around to Cervantes. On November 9, the diplomat wrote to Washington, "requesting you would accept, and give a place in your library, to the best Spanish edition of Don Quixote which I recollect to have heard you say, at Dr. Franklin's you had never seen."2 The book was published in Madrid in 1780.

By the time he received Don Diego's gift, Washington already owned his English translation. While Gardoqui's generosity did not have the desired effect—Washington refused to be drawn into the treaty negotiations—he did make Washington aware of Cervantes' great work, leading to Washington's purchase of the English edition. The book remained in Washington's library until his last years. In the inventory of Washington's estate taken after his death in 1799, the listing of books in his study runs eighteen pages. Among the books found "On the Table" is the English "Donquixote," valued at three dollars.

Mount Vernon currently owns both of Washington's copies of Don Quixote. The four small English language volumes are in original binding and are illustrated with charming copperplate engravings throughout. George Washington's signature appears on the title page of each volume and an impression of his bookplate, engraved in London in 1771, has been affixed to each front pastedown endpaper.