Hounds
A significant portion of the information relating to dogs in Washington's writings refers to animals used for hunting, and the majority of those dogs at Mount Vernon were hounds. Washington is credited by the American Kennel Club with being one of the people who helped develop the breed known as the American Foxhound. This new breed resulted from a mixture of different hounds imported from England and France, with local American stock. 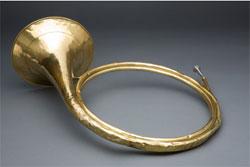 In 1785 a French admirer sent Washington seven French hounds via his friend the Marquis de Lafayette. Two years later, Washington received eight hounds from Philadelphia and two, "of Slow Pace," from England. Washington carried out an active breeding program at Mount Vernon. He often went foxhunting several times a week during the winter and ordered special equipment for that sport.1

The Mount Vernon pack was housed at Washington's kennel which, according to Martha Washington's grandson, was located about 100 yards south of the family vault. Washington inspected the kennels each morning and evening, at which time he visited with the dogs. The kennels, however, burned down late in 1792.

Non-sporting Dogs
In 1786 George Washington paid twelve shillings for a "Coach dog," who was known as Madame Moose.2 In August of the following year, at Martha Washington's instigation, a male coach dog was purchased to breed with the first.3

Sporting Dogs
Several years after the end of the Revolution, Richard Sprigg—a prominent Maryland politician and lawyer—sent George Washington a young female spaniel puppy descended from an English spaniel that Washington saw and admired while visiting Sprigg's home in Annapolis. Spaniels were used to flush out land birds from their hiding places in both fields and heavy brush, as well as to retrieve birds after they had been shot.

Terriers
While President, George Washington wrote to William Pearce—who was managing Mount Vemon in his absence—with some instructions about his terriers: "I hope Frank [the butler] has taken particular care of the Tarriers. I directed him to observe when the female was getting into heat, and let her be immediately shut up; and no other than the male Tarrier get to her." Terriers would have been useful on a farm, where they kept down the number of rats threatening stores of grain.

Working Dogs
According to Martha Washington's grandson George Washington Parke Custis, one of the slaves at Mount Vernon, a man named Tom Davis, used to hunt ducks for George Washington's table. Davis was accompanied on his hunting expeditions by a "great Newfoundland dog" who was named Gurmer.4