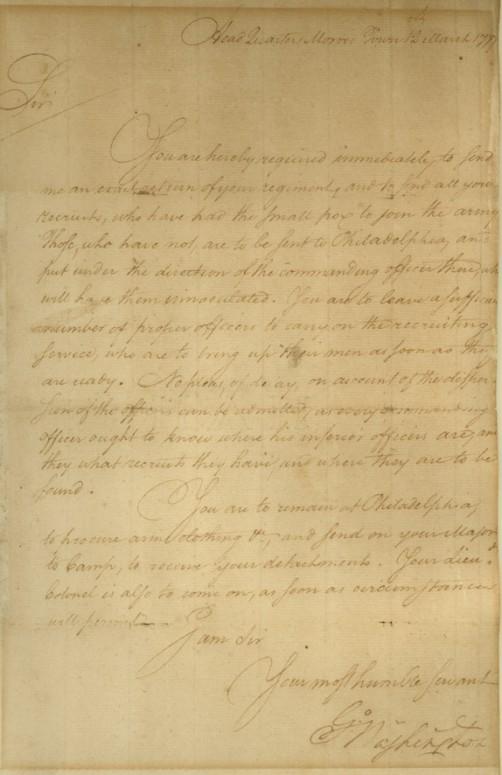 In the first years of the Revolutionary War, George Washington and his Continental Army faced a threat that proved deadlier than the British: a smallpox epidemic, lasting from 1775-1782. Infrequent outbreaks and wariness of inoculation made his troops very susceptible to the disease.  After heavy losses in Boston and Quebec, Washington implemented the first mass immunization policy in American history.

Smallpox in the Americas

Smallpox, caused by the Variola major virus, spreads only from person to person. It can take up to fourteen days before a person exposed to the virus will show symptoms: fever, headaches, body pains, and eventually the telltale rash. Witnesses and survivors of smallpox describe immense suffering. Death often comes within about two weeks. Survivors can take up to a month to recover fully; they are left with scars, but also lifetime immunity.

European colonization introduced smallpox to the Americas in the sixteenth century. Over the course of a little more than three centuries, outbreaks of the disease appeared sporadically in colonial America. In Europe, smallpox became an endemic disease by the eighteenth century; exposure often happened in childhood, which meant that virtually the entire adult population was immune. The American colonists, however, might have gone for years without any exposure to smallpox. It is difficult to track smallpox deaths during the Revolutionary War, but estimates indicate that Washington’s army lost more troops to disease in general than in combat. One study suggests that for every soldier who fell to the British, ten died from some sort of disease. Washington himself was no stranger to smallpox; while traveling in Barbados in 1751, he contracted the disease while staying with Gedney Clarke. However, Washington did not keep a record of his illness. His case was mild, leaving him with scarring on his nose.

Colonies dealt with smallpox in two different ways: quarantine and inoculation. Each colony had its own quarantine laws, which took different forms and were often enforced at the local level. Some colonials, particularly the wealthy, chose to be inoculated. Inoculation involved deliberate exposure to smallpox, usually through an incision made on the arm. This still resulted in a case of smallpox, but frequently one with milder symptoms and a greater chance of survival, with immunity as the end goal. Many were opposed to inoculation because the practice could still lead to an outbreak if an inoculated person was not properly quarantined while ill. Inoculation was heavily regulated, and banned outright in some places. Combined with the procedure’s expense, this made it a rare practice in America.

Immunity to smallpox became an important factor during the Revolutionary War in two ways. First, the British and Continental forces were disproportionately affected by the epidemic. The British troops arriving from Europe were more likely to be immune to the disease, either through inoculation or natural exposure. This was not true of Washington’s forces. As soldiers concentrated themselves in camp, the chances of a smallpox outbreak increased. Second, the British took quickly to inoculating fresh troops because the chances of triggering an outbreak were slim. Washington, on the other hand, struggled with the question of inoculation. Doing so would not only risk an outbreak; it would also leave a portion of the army unfit for battle while they recovered.

It was for these reasons that Washington decided against inoculation during his army’s first encounter with smallpox: the Siege of Boston in 1775. Civilians and soldiers who showed symptoms were kept from the rest of the army. When safe passage out of Boston was secured for some, the presence of smallpox was taken into account. There is some indication that the British, going against the agreement, used the disease as a biological weapon by forcing potentially infected Bostonians to leave the city. When the British gave up the city in the spring of 1776, the outbreak became even harder to control. Refugees spread smallpox throughout Massachusetts, and Boston’s outbreak continued until the end of summer. During the same period, the Continental forces besieging Quebec also suffered great losses due to smallpox. The soldiers were already in poor health, making them more susceptible. A quarantine was put in place, but it was not enforced strongly enough. When they were forced to retreat, smallpox went with them. These losses signaled to Washington and other revolutionary leaders that the army’s smallpox policy was not effective.

After weeks of indecision, Washington issued the order to have all troops inoculated on February 5, 1777, in a letter to President John Hancock. The next day, a second letter was sent to Dr. William Shippen, Jr. that ordered all recruits arriving in Philadelphia to be inoculated:

Finding the Small pox to be spreading much and fearing that no precaution can prevent it from running through the whole of our Army, I have determined that the troops shall be inoculated. This Expedient may be attended with some inconveniences and some disadvantages, but yet I trust in its consequences will have the most happy effects. Necessity not only authorizes but seems to require the measure, for should the disorder infect the Army in the natural way and rage with its usual virulence we should have more to dread from it than from the Sword of the Enemy.

The practice was soon implemented across the colonies. Army physicians also inoculated veteran soldiers who had yet to be exposed. Washington needed the process to be done in secret. He feared that the British would learn of the army’s temporary weakness and use it to their advantage. In March 1778, the inoculation orders were altered slightly. At Valley Forge, Washington encountered thousands of troops that had managed to avoid smallpox, either through inoculation or natural exposure. In need of immediate reinforcements, Washington realized that the army might not survive the delay of inoculation. Instead, he ordered that inoculations continue at the camp in Valley Forge. If quarantine procedures failed, there was a risk of an outbreak. However, the soldiers awaiting inoculation could be called to the front lines if necessary.