The Washington family typically ate two substantial meals per day—breakfast at 7 a.m. and dinner at 3 p.m. Tea or coffee sometimes followed in the early evening. The Washingtons relied on enslaved butlers, cooks, waiters, and housemaids to support their daily meals and frequent dinner parties.

A number of sources provide insight into food and food service at Mount Vernon. Chief among these documents are George Washington's carefully maintained financial records, his diaries and correspondence, and the weekly reports received from his farm managers and overseers. In addition, visitors to the Washington home occasionally recorded their dining experiences. 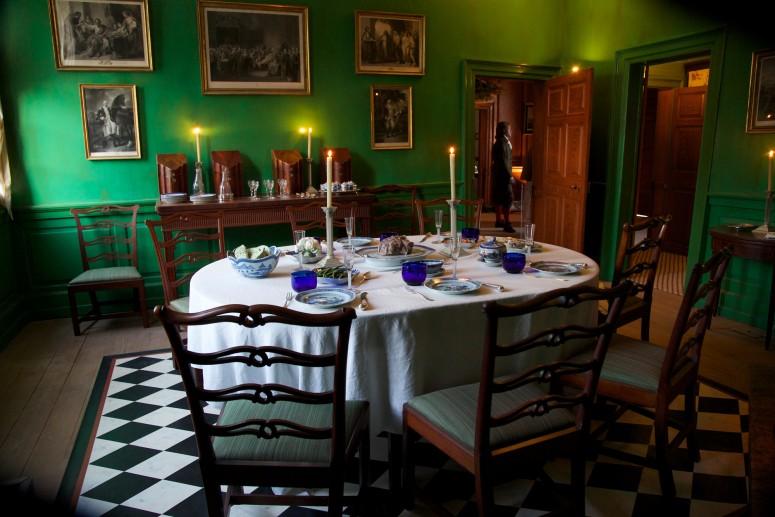 The first meal of the day at Mount Vernon was breakfast. While work assignments changed over the years in 1799, at about 4:30 a.m. enslaved cooks Nathan and Lucy would revive the fire in the kitchen, and draw and heat water. Enslaved butler Frank Lee or hired housekeeper Eleanor Forbes would set the table for breakfast properly with an elaborate array of porcelain dishes, glasses, silverware, and decorative ornaments. When the cooks had finished preparing the food, enslaved waiters carefully transported heavy platters from the detached kitchen to the dining room.

The meal was served at around seven in the morning. By that time, George Washington had already been awake for several hours, spending time reading or working on his correspondence. With the household involved in a number of undertakings in different locations, a signal was utilized to call everyone together. Winthrop Sargent, who visited Mount Vernon in October of 1793, was summoned to breakfast by "the great Bell."1

Benjamin Henry Latrobe visited in the summer of 1796 and his diary provides insight into a typical meal at Mount Vernon. Latrobe reported being served what he considered a typical Virginia breakfast consisting of tea, coffee, and cold and broiled meats. Manasseh Cutler had a similar meal in 1802 that included ham, cold corned beef, cold fowl, red herring, and cold mutton, all garnished with parsley and other vegetables from the garden.2

Chocolate was also a favorite breakfast beverage at Mount Vernon; Burges Ball requested in 1794 that Washington send him two or three bushels of chocolate shells, which he had "frequently drank Chocolate of at Mt. Vernon, as my wife thinks it agreed with her better than any other Breakfast."3

As with breakfast, a bell was sounded to call the busy household to the dinner table. The bell was first rung fifteen minutes before dinner. George Washington frequently expressed preference for meals that were plain but substantial. According to one young member of his household, Washington "ate heartily" at dinner, "but was not particular in his diet, with the exception of fish, of which he was excessively fond."4 Several French officers stopped at Mount Vernon in 1780 to pay their respects to Martha Washington, who invited them to dinner. One of them, Pierre Etienne Du Ponceau, found that "the table was abundantly served, but without profusion."5

While a number of visitors made references to dining with the Washingtons, only a few went into detail about the contents or progress of the meal. In June of 1797, Amariah Frost was given what he considered a "very good" dinner consisting of "a small roasted pigg, boiled leg of lamb, roasted fowles, beef, peas, lettice, cucumbers, artichokes. . .puddings, tarts, etc. "6

About a year and a half later in February 1799, Joshua Brooks recorded a number of specific details about his dinner at Mount Vernon. The table was arranged with a leg of boiled pork at the head, a goose at the foot, and the following dishes arranged around the table: roast beef, round cold boiled beef, mutton chops, hominy, cabbage, potatoes, pickles, fried tripe, and onions. Beverages offered during dinner included wine, porter, and beer. The tablecloth was wiped off before the second course, which included mince pies, tarts, and cheese. The cloth was then removed altogether and port and madeira, as well as two kinds of nuts, apples, and raisins were set out. The eight diners were attended by three servants.7 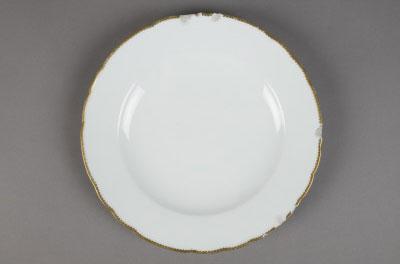 Supper was occasionally offered later in the evening, but was not a regular meal for the Washingtons. As President, George Washington himself noted in a letter to his household steward that "we never have suppers nor sudden calls for extra dinners," a statement which was probably true for the presidential mansion, and may indicate his general preference.8

Martha Washington's grandson recalled that during a typical family evening, George Washington would leaf through newspapers "while taking his single cup of tea (his only supper)," while reading aloud "passages of peculiar interest, making remarks upon the same." At nine o'clock, Washington would say good night and head for his bedroom.9

6. Pierre-Etienne Duponceau, quoted in "A Visit to Mount Vernon in 1780," George Washington as the French Knew Him: A Collection of Texts, ed. Gilbert Chinard (Princeton: Princeton University Press, 1949), 19.