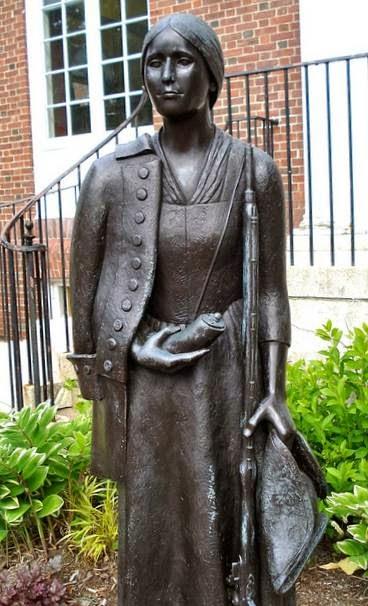 Deborah Sampson is best known for disguising herself as a man to serve in the Continental Army from May 1782 to October 1783. She was also one of the first women to receive a pension for her military service and the first woman to go on a national lecture tour of the United States.

Born on December 17, 1760, in Plympton, Massachusetts, Sampson grew up in poverty. Her father abandoned the family when Sampson was five. She was sent to live with relatives until the age of ten, when they could no longer afford to care for her. She was then forced to become an indentured servant to the Thomas family in Middleborough, Massachusetts. As an indentured servant, she was bound to serve the Thomas family until she came of age at eighteen. In exchange for serving them, she was given food, clothing, and shelter. Once she was free, she supported herself by teaching and weaving.

On May 23, 1782, at the age of twenty-one, Sampson disguised herself as a man named Robert Shurtliff and enlisted in the Continental Army under the Fourth Massachusetts Regiment. She and the other new recruits then marched from Worcester, Massachusetts to West Point, New York. While at West Point, Sampson was chosen to serve as part of the Light Infantry Troops–– the most active troops in the Hudson Valley from 1782 to 1783. To be inducted into the Light Infantry Troops, soldiers had to meet specific requirements. They needed a height of at least 5’5” and had to be physically able to keep a fast and steady marching pace. They were referred to as “light” infantry because they traveled with fewer supplies and took part in small, risky missions and skirmishes.

Sampson spent most of her time in the army in the Lower Hudson River Valley Region of New York, which was then known as Neutral Ground. Neutral Ground spanned throughout what is today Westchester County in New York and was termed “neutral” because it sat, unclaimed, between British-held New York City and American-held Northern New York. Neutral Ground was a lawless land filled with both Patriot and Tory raiders who terrorized the local citizenry.

George Washington spent much of his time in the Hudson River Valley just north of Neutral Ground in Newburgh. He journeyed to Newburgh about six months after The Battle of Yorktown and remained there for nearly the entirety of Sampson’s service in the army. From April 1782 to August 1783, Washington lived at the Hasbrouck residence, not far from the New Windsor Cantonment, where Sampson spent the winter of 1782. While there, she served as a waiter to General John Paterson whenever she was not on missions with the Light Infantry Troops.

While serving in Neutral Ground, Sampson was part of many skirmishes against Loyalist raiders, typically referred to as “cowboys.” During one of these skirmishes, she was shot in the shoulder. Unable to seek proper medical treatment without revealing her true gender, she allegedly left the bullet in her shoulder and continued her duty as a soldier.

Sampson served undetected until she fell unconscious with a high fever while on a mission in Philadelphia during the summer of 1783. The attending physician, Dr. Barnabas Binney, discovered Sampson’s gender while treating her. He revealed her identity to General Paterson through a letter. Sampson was honorably discharged at West Point on October 25, 1783.

After the war ended, Sampson returned to Massachusetts and married a farmer, Benjamin Gannett, in 1784. They had three children and adopted a fourth. In 1792, she successfully petitioned the Massachusetts State Legislature for back pay for her service in the army and was awarded 34£. In 1797, she petitioned Congress, claiming disability for the shoulder wound she received during the war. Her petition ultimately failed.

However, starting in March 1802, Sampson began a lecture tour of Massachusetts, Rhode Island, and New York. She was the first woman in America to do so. On her journey, she spoke in Boston, Providence, Holden, Worcester, Brookfield, Springfield, Northampton, Albany, Schenectady, Ballston, and New York City. She made this journey alone and was often ill. During her stay in Albany, on September 11 and 12 of 1802, Sampson recorded that she had “taken Very Sick with the tooth ake [sic] and ague in my face.”[1] The following day she stated that she was “No better. in Extreem [sic] pain. no rest Day nor Night.”[2] Despite these recurring maladies, she completed her lecture circuit and returned home in April 1803.

After the lecture tour, Sampson petitioned Congress again. This time, her petition succeeded. On March 11, 1805, she was placed on the pension list for disabled veterans. She continued campaigning Congress for the entirety of the money she was due until she was denied the remainder of her pay on March 31, 1820.

Deborah Sampson Gannett died in Sharon, Massachusetts on April 29, 1827, at the age of sixty-six. She is one of the earliest examples of a woman serving in the United States Military. Her headstone in Sharon honors this accomplishment, referring to her as “The Female Soldier.”

Mann, Herman. The Female Review: Life of Deborah Sampson, the Female Soldier in the War of Revolution. Boston: 1866.