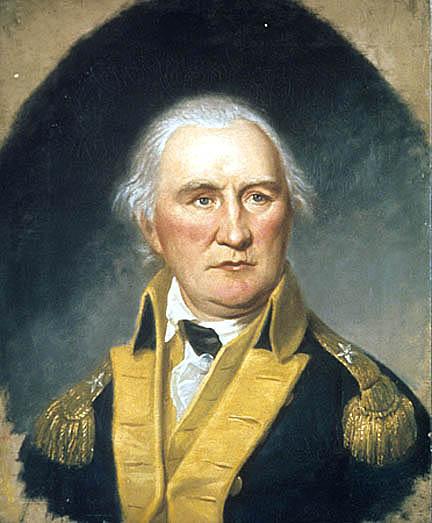 Daniel Morgan, a brigadier general in the American Revolutionary War, was one of the Continental Army’s most valuable tacticians and commander of several of the most successful rifle corps of the war. He served alongside and under several famous officers, including George Washington, Benedict Arnold, Horatio Gates, and Nathaniel Greene. Morgan participated in several major campaigns of the Revolution, such as the invasion of Canada, the Saratoga Campaign, and the Southern Campaign. However, Morgan’s most famous victory was defeating Colonel Banastre Tarleton’s British Legion at the Battle of Cowpens in January 1781 by implementing tactics that successfully combined state militias, Continental regulars, and cavalry units.

Little is known about Morgan’s birth and childhood. He is believed to have been born in 1735 to Welsh immigrants in New Jersey, although Pennsylvania and Virginia have also claimed him as a native. Around the winter of 1752, Morgan left home, headed west, and finally settled in Winchester, Virginia, where he would spend the majority of his life. Morgan worked as an independent wagoner and, as such, was impressed into the British army during the French and Indian War. Morgan’s service with the British and the Virginia militia during the war expanded his military expertise and was the first time he served under George Washington. By 1774, Morgan had become a yeoman farmer with a family and captain of the Frederick County Militia.

In 1775, Morgan was chosen to lead one of two newly raised Virginia rifle companies that were selected to join the campaign to invade Canada. Morgan’s superiors, General Richard Montgomery and Colonel Benedict Arnold, fell during the assault on Quebec, forcing Morgan to take over command. Despite Morgan’s determination and outstanding leadership, his forces were overrun and taken prisoner by the British.

In the fall 1776, Washington wrote to “recommend to the particular notice of Congress, Captain Daniel Morgan . . . a good and valuable officer” and to suggest that he was the “fit and proper person to succeed” Colonel Hugh Stephenson as commander of a rifle unit.1 Taking Washington’s advice, Congress promoted Morgan to the rank of colonel in the Continental Army and placed him in charge of Stephenson’s independent light infantry unit after Morgan was released by the British in early 1777. In August, Washington sent Morgan and his corps to northern New York under the authority of General Horatio Gates. Morgan and his riflemen were instrumental in the surrender of British General John Burgoyne at Saratoga. Gates considered Morgan’s unit “the corps the army of General Burgoyne are most afraid of” and told Congress that “too much praise cannot be given to the Corps commanded by Col. Morgan.”2

In 1779, Morgan was passed over for a promotion to brigadier general and command of a new rifle corps. His pride wounded, Morgan decided to retire from the army. During Morgan’s absence, Gates suffered a devastating loss to General Lord Charles Cornwallis’s forces at the Battle of Camden in South Carolina. As a result, Morgan was instructed to rejoin Gates, this time in the South.

Not long after Morgan arrived in North Carolina, he was given another independent light corps and told to support the state militias fighting in that area. By mid-November 1780, Morgan was finally made a brigadier general by Congress. General Nathaniel Greene, who had replaced Gates in the South, decided to split his army and sent Morgan into South Carolina. In early 1781, Morgan learned that Cornwallis and Colonel Banastre Tarleton, also a commander of a light infantry force, were moving to attack his corps. Early in the morning on January 17, 1781, Tarleton led an attack on Morgan’s forces at Cowpens.

Morgan’s battle plan combined militia, regulars, and cavalry. He placed a small line of skirmishers out in front who were to fall back into the main militia line under Colonel Andrew Pickens’s command. Behind the militia line, Morgan placed the Continental regulars. Behind these three lines Morgan stationed Lieutenant Colonel William Washington’s cavalry. Once the battle began, Pickens’s militia and the skirmishers, after firing at the British, escaped off the battlefield and, under Morgan’s encouragement, reformed behind the main line of regulars. Once Tarleton’s troops broke their line to charge the Americans, Washington’s cavalry moved around the British right flank while Pickens led his reformed militia around the British left flank, completing the double-envelopment movement. Although Tarleton retreated, the British casualties amounted to 110 killed and 702 captured. The Battle of Cowpens was Morgan’s most successful battle.

Since the invasion of Quebec, Morgan had suffered from chronic sciatica, which had become more painful the more time he spent on a horse. His health made it difficult to continue in the service of his country. He was forced to return home, but his efforts at Cowpens meant that General Washington would oppose a greatly weakened Cornwallis at the Battle of Yorktown in October 1781. After the war, Morgan played a role in putting down the Whiskey Rebellion in Pennsylvania. In 1797, he was elected to represent Virginia in the United States House of Representatives. He retired from Congress in 1799 when his declining health made it impossible for him to run for office again. Daniel Morgan died at his home in Winchester, Virginia, in July 1802 at the age of sixty-seven.

Babits, Lawrence Edward. A Devil of a Whipping: The Battle of Cowpens. Chapel Hill: University of North Carolina Press, 2001.