George Washington was a tireless correspondent and detailed record keeper. As 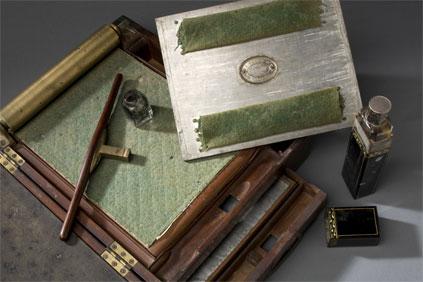 he assumed the roles of military leader and first President, his volume of letters, memoranda, and accounts grew. The management of his papers increasingly demanded his concern and time. The "copying press" was a timely invention by James Watt, a Scottish engineer better known for his development of the steam engine.

The press was eventually integrated into Washington's management of records. As Commander-in-Chief, Washington assumed the responsibility of preserving and protecting the growing mass of reports and instructions that systematically documented the decisions and activities of the Continental Army. In April 1781, Washington wrote Congress requesting assistance in managing his files. Upon Congress's approval, he brought on board New York lawyer Richard Varick, who was asked to hire a staff of clerks to copy Washington's orders, instructions, and minutes of the councils of war. Varick established quarters at a quiet retreat in Poughkeepsie, New York, and by December 1783 completed his assignment.

Scottish engineer James Watt and English engineer Matthew Boulton had formed a partnership headquartered in Birmingham, England to manufacture steam engines. In the course of his work, Watt found the hand copying of business letters, drawings, and design specifications had become increasingly burdensome. In 1780 Watt patented an invention that copied all of his business papers. Washington received his machine just two years later in the latter half of 1782.

Watt discovered a method of applying plain moistened paper with pressure to a freshly written letter so the ink from the original would be offset onto the copy paper. Watt patented two models, a rolling press and a screw press. The rolling press consisted of two superimposed parallel rollers mounted on a frame that was clamped to a table. Springs within the frame helped control the pressure of the rollers when they were turned by a lever. The letter to be copied was placed on a board, covered by a thin piece of dampened copying paper and then by a felt-like cloth. The board was passed through the rollers slowly one way and then rolled back through again. The screw press was based on the same principle but involved screwing two blocks of wood or metal together, rather than using rollers.

Through the years improvements in unsized copying paper produced sheets that were tissue thin so the reverse image could be seen through the paper and be read in a normal fashion. The copy machine was accompanied by dampening and wetting boxes, vials for measuring spring water, and dampening brushes, all to moisten the copy paper. Watt also developed special inks that produced durable, clear originals. Sponge paper was used to dry the original letter after the copy was made, and oiled papers could be placed on the letter board in order to increase the pressure of the rollers if needed.

There is clear evidence of the use of a copying press during Washington's first term as President. An entry in Washington's Philadelphia household accounts for January 4, 1791 notes an order for a dampening brush. By 1792, Washington began using paper manufactured for him in three different weights for journals, ledgers, and press copies. The paper had a watermark with his name placed within concentric circles, crowned by a raven and surrounding Liberty sitting on a plow; an unknown designer created a symbol for Washington.

Upon his death, Washington's estate appraisers listed one copying press and one old copying press in his study. It is unclear whether or not one of these was the early copy press sent at the end of the war. However, the records clearly show Washington used a rolling press developed by James Watt helping him manage his papers and preserve his legacy for future generations.

Abbot, W.W. "An Uncommon Awareness of Self: The Papers of George Washington" in Prologue: Quarterly of the National Archives (Spring 1989): 6-19.

Andrew, James II. "The Copying of Engineering Drawings and Documents" in The National Society for the Study of the History of Engineering and Technology Transactions, 43.