The Society of the Cincinnati was a fraternal and charitable association of Continental Army officers that sparked widespread conspiracy theories and tested Washington's efforts to carefully manage his legacy.

Although Washington gave up power, relinquishing his position as Commander-in-Chief after the Revolutionary War, he was called out of retirement to become America's first president in 1789. 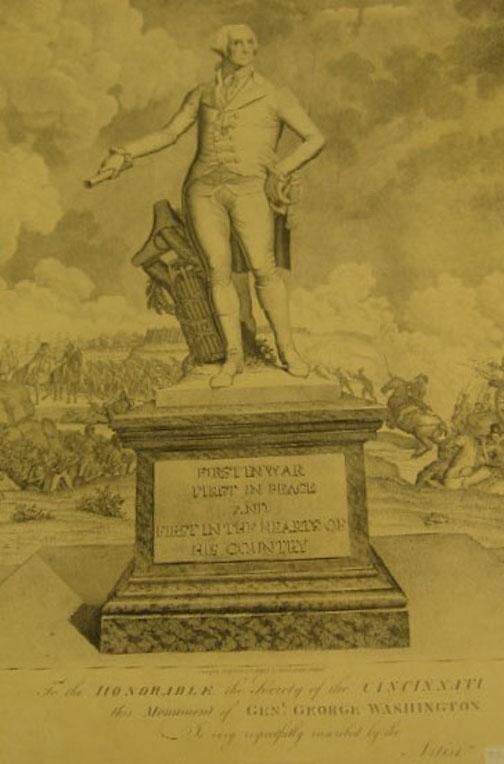 You have often heard him compared to Cincinnatus," the French traveller Jacques-Pierre Brissot de Warville wrote after visiting George Washington at Mount Vernon in 1788. "The comparison is doubtless just. The celebrated General is nothing more at present than a good farmer, constantly occupied in the care of his farm and the improvement of cultivation."1

Brissot's classically-educated readers would have been familiar with the story of the Roman general Cincinnatus from the Roman historian Livy, or from contemporary works like Charles Rollin's popular history of Rome, published in 1750. According to the story, powerful enemies of Rome, the Aequians, were threatening an invasion of the city. The Roman Senate, finding the current consul unprepared to meet the crisis, voted unanimously to confer the extraordinary powers of dictatorship on their most distinguished former general, L. Quinctius Cincinnatus.

At the time, Cincinnatus was living in retirement on his four-acre farm outside of Rome and representatives from the Senate found him working in his field. When he learned of the emergency facing Rome, he left his plow standing in the field, bid farewell to his wife, and led the Romans to victory against the Aequians. Fifteen days after assuming the dictatorship, Cincinnatus resigned and returned to his plow.2

The parallels with General George Washington were not lost on his contemporaries. Called up from his retirement at Mount Vernon to lead the Continental Army, Washington dramatically resigned his commission and returned to his farm once the war had been won. In emulating Cincinnatus, Washington allayed real fears that he might use his position as a successful general to retain power as a military dictator. In the process Washington illustrated that he placed public service above personal gain.

For Romans and Americans alike, Cincinnatus represented the ideal republican simplicity, an enlightened poverty that spurned luxury and cultivated a simple nobility of spirit. As the historian Rollin wrote of Cincinnatus: "Happy times! admirable simplicity! Poverty was not universally practiced, but it was esteemed and honoured, and not considered as a disqualification for the highest dignities of the state. The conduct of Quinctius [Cincinnatus] during his Consulship... [shows] us what a noble nature, what constancy, and what greatness of soul, inhabited a poor wretched cottage."3

For the Revolutionary generation, the republican simplicity of the American farmer provided a pointed contrast with the perceived luxury and decadence of the British empire. As the American Cincinnatus, Washington embodied America's agricultural self-sufficiency, which he saw as a crucial element in its economic and political independence from Great Britain.4

Depictions of Washington as Cincinnatus abounded in the Revolutionary and Early Republican periods. Philip Freneau evoked Cincinnatus in a poem written on the occasion of Washington's resignation in December 1783. Remarking on Washington's decision to return to retirement at Mount Vernon, Freneau wrote: "Thus He, whom Rome's proud legions sway'd/Beturn'd, and sought his sylvan shade."5 Thirty years later, in his "Ode to Napoleon," Lord Byron eulogized Washington as "the Cincinnatus of the West."6 In one of the most famous contemporary images of Washington, Jean-Antoine Houdon's statue (1785-1791) in the rotunda of the state capitol in Richmond, Virginia, the retired general is portrayed in civilian dress as "a modern Cincinnatus," standing in front of his plow.7

In 1783, Washington was elected first president of the Society of the Cincinnati, an organization of military officers who served in the Revolutionary War. The society's Latin motto, Omnia reliquit servare rem publicam ("He gave up everything to serve the republic"), alludes to the story of Cincinnatus. Because membership passed exclusively from father to son, the Society attracted criticism as a hereditary society that smacked of Old World aristocracy and privilege.8 Thomas Jefferson unsuccessfully attempted to convince Washington to distance himself from the Cincinnati. Jefferson wrote of the Society: "Their sight must be perfectly dazzled by the glittering of crowns & coronets."9

2. For Livy's account of Cincinnatus (in English translation), see Livius, Titus, The History of Rome. Volume 1. Electronic Text Center. University of Virginia Library. The full story runs from 3.26 to 3.29. For the Founders' appropriation of Cincinnatus as a model, see Carl J. Richard, The Founders and the Classics: Greece, Rome, and the American Enlightenment (Cambridge, MA: Harvard University Press, 1994): 55-56, 70-72; and Carl J. Richard, Greeks and Romans Bearing Gifts: How the Ancients Inspired the Founding Fathers (Lanham, MD: Rowman & Littlefield, 2008): 125-127. The fullest account of Cincinnatus and Washington is Gary Wills, Cincinnatus: George Washington and the Enlightenment (Garden City: Doubleday, 1984).

3. Charles Rollin, The roman history from the foundation of Rome to the battle of Actium: that is, to the end of the Commonwealth. Translated from the French, Vol. 1 (London: printed for John and Paul Knapton, at the Crown in Ludgate-Street, MDCCXXXIX. [1739]-50): 38.

5. Philip Freneau, "Occasioned by General Washington's Arrival in Philadelphia, On His Way to His Residence in Virginia" (December 1783). The comparison to Cincinnatus was not originally confined to Washington; in 1776, for example, William Smith compared General Richard Montgomery with Cincinnatus. See William Smith, An Oration in Memory of General Montgomery (Philadelphia: Printed by John Dunlap, 1776): 15.

9. Thomas Jefferson quoted in General Washington's Correspondence concerning the Society of the Cincinnati ed. E. E. Hume (Baltimore: The Johns Hopkins Press, 1941): 384. Objections to the Society were first raised in a pamphlet by South Carolinian Judge Aedanus Burke in 1783; see "Cassius" [Aedanus Burke], Observations on the Order of the Cincinnati (Philadelphia, 1783).