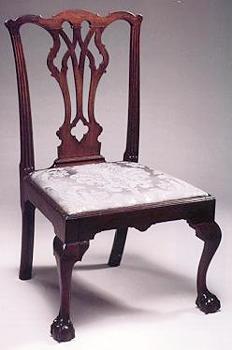 The Chippendale side chair was one of the fourteen plain mahogany side chairs that George Washington listed amongst the furnishings secured for him by Congress for his presidential dwelling at 3 Cherry Street in New York City. Crafted in Philadelphia between 1760 and 1780, the chair exhibits construction and stylistic elements typical of that city.

The Gothic tracery of the splat provides the chair's focal point, and the dramatic free-flowing movement of its interlacing is framed by fluted stiles and dramatized by a serpentine crest rail. The unadorned seat frame and simple skirt are supported by cabriole front legs with plain knees terminating in claw-and-ball feet. In 1790, the seat of government moved from New York to Philadelphia, and the Washingtons relocated. Most of the furnishings used in New York were transferred to the new executive residence at 190 High Street.

Seven years later, as Washington prepared to return home to Mount Vernon, he meticulously crafted a list of all public furniture procured for presidential use by Congress as well as all private objects he purchased through the course of his presidency. Although Washington sold several privately purchased items before setting off for Virginia, no sale of public furniture is known to have been made. Therefore, presumably Washington's Chippendale chair remained as government property in the executive mansion for use by the Adams administration.

President John Adams, however, did not keep detailed furnishing records. However, it is relatively certain that a number of government-owned pieces deemed out of style or in disrepair were sold between 1797 and 1800. It is through this sale of furniture at the turn of the nineteenth century that the side chair made its way from public ownership into private hands. An 1839 label on the slip-seat frame reads:

"THESE CHAIRS Were in possession of GEN. GEORGE WASHINGTON While residing in Philadelphia as president of The United States of America and were purchased at a sale of his effects by PETER HINKLE And kept by him until his decease when they became The property of the present owner WILLIAM GARDNER A.D. 1839"

Peter Hinkle, a resident of Philadelphia County, purchased the chair when the sale of Washington administration furnishings took place. After descending to Hinkle's nephew, William Gardner, the set's whereabouts are unknown until American furniture dealers and institutions acquired examples in the twentieth century.