The wide array of ceramics and Chinese porcelains that made their way to George Washington's residence at Mount Vernon were a testament not only to his own personal taste but also reflected a popular fashion among the American elite. Elegantly furnished dining and tea tables were common among the aristocracy in eighteenth-century England and France, and prosperous Americans eagerly imported similar luxury goods both before and after the Revolution.

Porcelains and ceramics satisfied the basic need of table and tea ware, while displaying the fashion sense of their owner. Dinner parties were a popular means of socializing, and Chinese porcelain would have been used to serve guests in America's most affluent households. Washington was one of many who expressed a desire to be fashionable when he ordered porcelain pieces, adding "pray let them be neat and fashionable or send none."1

Although Chinese porcelain was available in the colonies as early as the seventeenth century, it did not become commonplace until after 1730. Before the Revolution, porcelain was exported to the colonies mainly by English and Dutch traders. European traders sailed to Canton (Guangzhou) in southern China, exchanged their goods for Chinese products, and then returned to sell porcelain and other Chinese imports on the European and colonial markets. In addition to porcelain, teas and silks were also exported from China in large quantities.2

George Washington received his first shipment of porcelains from England in 1758 from a London merchant named Richard Washington. Although the journey across the Atlantic was often unforgiving for fragile ceramics, Washington happily reported that he received his order "without any breakage."3 Washington made his first purchases of porcelains in his bachelor years at Mount Vernon. He would continue to acquire Chinese porcelain throughout his life.

Blue and white china was typical of the fashionable porcelain of the eighteenth century. Washington was fond of this type of porcelain and ordered it on at least nine occasions. His first order of blue and white porcelain arrived in April 1763. This shipment consisted of "1 compleat sett Table China fine blue & white consisting of - 11 long Dishes 24 plates 12 Soop plates 1 Tureen Covr & Dish 4 Sauce Boats 4 Salts."4 Along with other household goods, Washington always ordered porcelain in large sets. Like many among the gentry, he entertained large numbers of guests at his plantation home.

To pay for frequent orders from England, Washington, like many Virginia planters, sent his tobacco crop to London merchants, who set prices for both the tobacco and the goods sent in return. John Wayles, a debt collector for an English mercantile house (and Thomas Jefferson's future father-in-law), noted the trend toward greater spending on the part of Virginia planters. Wayles reported that in 1740 few planters owned imported luxuries like Turkey or Wilton carpets, but such articles had become common by the 1760s. "This is in great measure owing to the Credit which the Planters have had from England & which had enabled them to Improve their Estates to the pitch they are Arrivd."5 Opulent purchases of imported porcelains, carpets, and other luxury goods could often plunge planters deeply into debt. As Washington observed in 1769, "many families are reduced, almost, if not quite, to penury and want, from the low ebb of their fortunes, and Estates daily selling for the discharge of Debts."6

The imperial crisis increasingly disrupted trade between Great Britain and the colonies in the 1770s, preventing colonists from importing Chinese porcelain and other luxury goods. Washington had an increasingly difficult time procuring porcelains. "I have been impatiently waiting for my Goods...having heard nothing from you in respect to them since the 12th of September . . . ," he complained in 1772, when he settled his account with Robert Cary and Company, never again to import porcelains from England.7

To assure Americans continued access to Chinese porcelains and other desirable imports, a new trade route was necessary in the post-revolutionary era. An American ship, the Empress of China, captained by John Green, set sail from New York City for Canton on Washington's birthday, February 22, 1784 at a cost of $120,000. Captain Samuel Shaw (formerly supercargo) and his Empress of China returned to New York on May 11, 1785.8 Onboard were tea, fabrics, cassia (cinnamon), and roughly 64 tons of porcelain. By 1790, America had sent twenty-eight ships to Canton.  "If you should be in want of a new set of China it is in my power to procure a very genteel set," fellow Virginian Henry “Light Horse Harry” Lee informed Washington, who ended up purchasing a 302-piece set. The first direct trade relationship between the United States and China had been established.9

The porcelain set Washington purchased was notable both because it came from the first American trip to China and because it was decorated with the emblem of the Society of the Cincinnati, a hereditary organization whose members were limited to those who had served as officers in the French or American armed forces during the Revolutionary War. Washington served as the society's first president until his death in 1799.  Samuel Shaw supplied the artist in Canton with the emblems of the Cincinnati. Shaw remarked in his journal that "It is a general remark, that the Chinese, though they can imitate most of the fine arts, 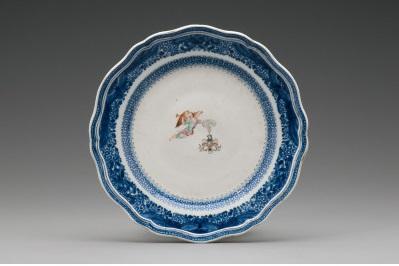 do not possess any large portion of original genius."10