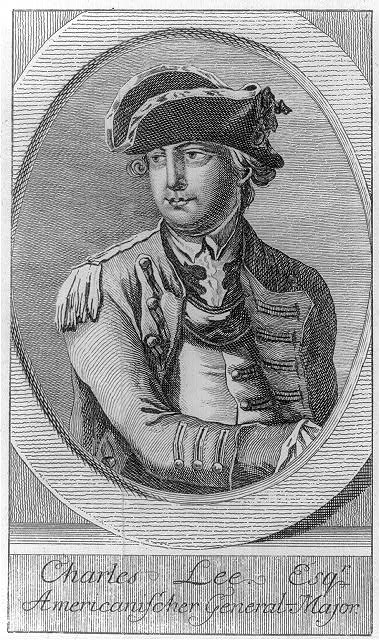 A former British Army officer, Charles Lee retired from that service shortly before he joined the American rebellion. At certain points he is believed to have sought to supplant George Washington and take command of the Continental Army. Lee and Washington came into direct confrontation during the Battle of Monmouth on June 28, 1778. Lee's conduct during the battle and the subsequent exchange with Washington eventually led to his permanent dismissal from the Continental Army.

Charles Lee was born in Cheshire, England the son of British Army General John Lee and Isabella Buxbury. Educated in Switzerland, Lee became fluent in several languages. He joined the British army in 1744. After serving in a number of European armies, including those of Russia, Poland, and Portugal, he took up permanent residence in America and joined the Continental Army in 1775. Lee was commissioned second major general in the force, following only George Washington in seniority.

Lee was widely respected in the colonies for his military reputation, and his military advice and direction were sought after in a number of locations in the first years of the conflict. He served on the siege lines outside of Boston and aided in the development of the defenses of Newport, Rhode Island. Afterwards he began the defenses of New York, and was reassigned to the southern department where his most significant contribution came in the defense of Charleston, S.C. against a British assault in 1776.

These actions led to Lee achieving a fairly high reputation. Lee was captured by the British in 1776 following the fall of New York City. Exchanged in a prisoner swap in 1778, Lee returned to the Continental Army and was a staunch critic of the reforms of the Baron von Steuben. There is some speculation that Lee abandoned the American cause while a prisoner in New York, as he wrote several notes to William Howe on the best manner to defeat the Americans. This was unknown to the American camp at the time of his return and Lee was reinstated at his previous rank.

Lee returned to the field and led the advanced guard at the Battle of Monmouth on June 28, 1778. Lee's attack was disorganized and the ensuing confusion resulted in the retreat of the American advance guard.  When confronted by Washington on his reason for the withdrawal, the two men exchanged words. Lee was brought up on charges of insubordination and removed from command in the army for one year. In the aftermath, he became embroiled in several affairs of honor and often criticized the Continental Congress for enforcing the sentence on him. These actions led to his permanent dismissal from the Continental Army in January of 1780. He died in Philadelphia in 1782.