Champagne was not the only wine product enjoyed at the Mount Vernon estate by the Washington family. 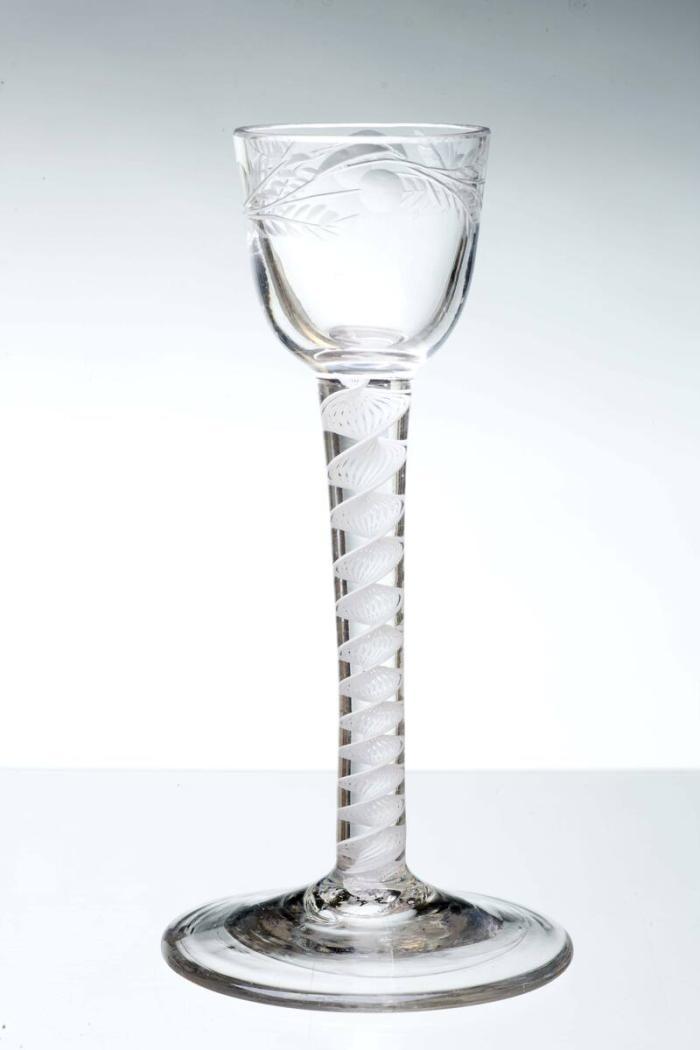 In eighteenth century America, wines from France were less commonly available than those from Spain and Portugal, primarily because of frequent political conflicts between France and England. Several types of French wines did make their way to America for those who could afford the higher prices, including champagne, which was a product of vineyards in northeastern France. During this period, the pale red beverage was typically served in tall champagne flutes, between dinner and dessert, or at evening parties.1

Like other men of his social class, George Washington had the money and connections to acquire champagne for his table. He may have first become acquainted with champagne in the palace in Williamsburg, where the royal governor, Lord Botetourt is known to have had three bottles stored "In the Vault" at the time of his death in 1770.2 In 1793, as president, Washington purchased 485 bottles of champagne and burgundy, which cost him $355.67. Six bottles were "got as a sample" in May of 1794 and another twelve found their way to the executive mansion in November of the same year. Judging from these last two purchases, champagne at this time cost Washington about $1.00 per bottle.3

After the Revolution, Robert Hunter, Jr., a guest at Mount Vernon, recorded that "a very elegant supper" was served around nine at night. The dinner’s special guest was Washington’s old friend, Richard Henry Lee, who was the president of Congress and from whom Washington was "anxious to hear the news of Congress." Hunter noted that "The General with a few glasses of champagne got quite merry, and being with his intimate friends laughed and talked a good deal." Hunter also recognized how rare this was, commenting that "Before strangers, he [Washington] is generally very reserved and seldom says a word. I was fortunate in being in his company with his particular acquaintances. I'm told that during the war he was never seen to smile…."4

In 1791, Scottish artist Archibald Robertson visited the presidential mansion in Philadelphia in order to deliver a gift to George Washington from the Earl of Buchan--an oak box, "elegantly mounted with silver." The box was made from the "celebrated oak tree that sheltered the WASHINGTON of Scotland, the brave and patriotic Sir William Wallace, after his defeat at the battle of Falkirk, in the beginning of the fourteenth century, by Edward the 1st." Robertson was asked to stay for dinner.

The custom of ladies withdrawing to another room after dinner was common practice in the eighteenth century. Based on descriptions by Washington’s dinner guests, this practice was followed both at Mount Vernon and in the presidential household. During this particular meal, however, the custom seems to have been reversed. Robertson recorded that dinner ended with several glasses of "sparkling champagne," "over which people lingered for about 45 minutes." Afterwards George Washington and Tobias Lear rose from the table and went to another room, "leaving the ladies in high glee," which Robertson attributed to Lord Buchan and the "Wallace box," but may have been due more to both the unaccustomed role change and the effects of the sparkling wine.5