In February 1832, Congress was engaged in a fierce set of debates over tariff legislation. While tariff percentages were the major issue at hand, representatives from different political parties and regions presented a variety of arguments reflecting the growing sectional divide between North and South. The unstable political climate almost overshadowed the approaching centennial of the birth of George Washington.

As Congress shifted its focus from the tariff debate to Washington's centennial, Kentucky Senator and Whig nationalist Henry Clay made an unexpected recommendation. Clay suggested that the federal government fulfill a resolution that permitted the removal and internment of George Washington's body into the Capitol building in Washington, D.C. The original proposal had been unanimously approved by Congress in 1799 after Washington's death and agreed to by his widow Martha. The idea was first proposed by Virginia representative John Marshall, who believed that Washington deserved a grand monument and tomb.

Much had changed, however, since Washington's death. The resurrected resolution only further enflamed the suspicions of Southerners that Northerners were abusing the power of the federal government. It also united Virginians in resistance and provided a common ground between Eastern and Western Virginians. The two groups agreed that Washington was Virginia's greatest hero, and his bodily remains belonged to the state of Virginia.

Before the Congressional vote, officials opened the floor for debate. Senator Littleton Tazewell of Virginia stood up and berated the proposal. Tazewell argued that Washington had requested in his will to be buried at Mount Vernon next to his wife and kin. Tazewell's speech concluded by asking, "Do you think we are willing to part with his ashes? What right have you to intrude into our domain, and insult the feelings of the whole State?" Fellow Virginian John Tyler agreed, asking the Senate to "Let the Great Dead sleep the sleep of death…Let him not be exhibited in the Capitol as a spectacle to a gaping crowd." The possible removal of Washington's body and subsequent occupation in a national building threatened Virginia's rights, Tyler argued, because Virginians considered Washington’s body to be a state relic. While the Senate agreed that Washington was a national symbol, his body—much like the national government and the country at the time—was contested along sectional lines.1 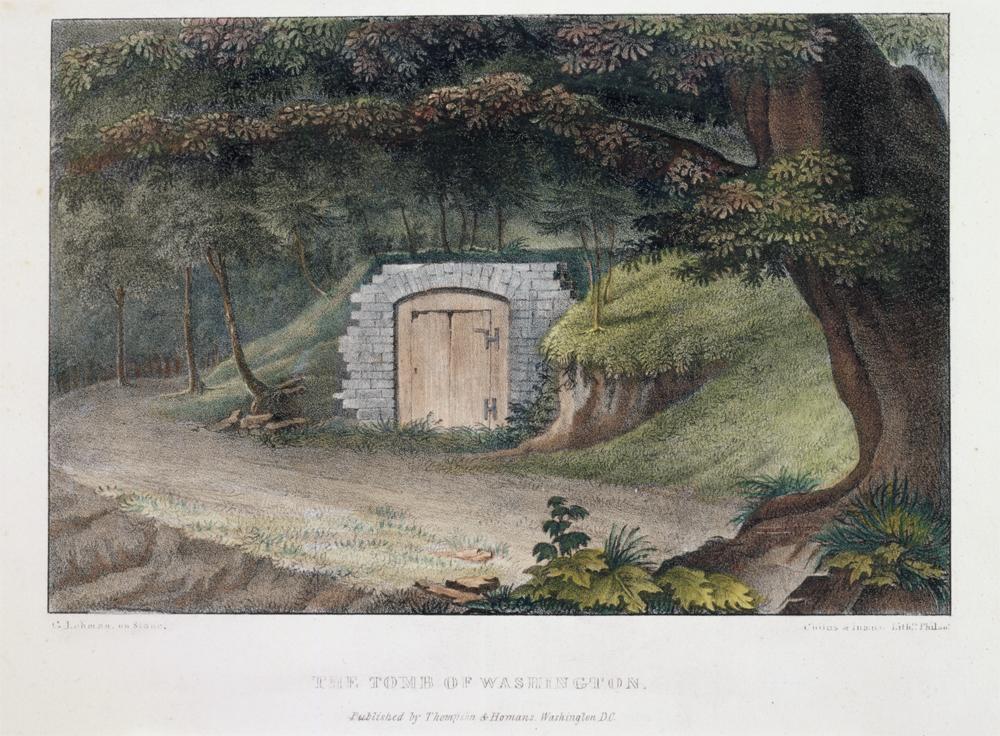 Other Southern senators echoed similar opinions as the Virginians. Senator John Forsyth of Georgia read Washington's will aloud, arguing that Washington specifically designated his burial place and wished that his funeral was without "pomp or parade." Washington's words strengthened the arguments of Virginians and southern factions.

Northern senators, however, tended to disagree. John Holmes of Maine argued in favor of removal, believing that "The ashes beneath them would prevent them (Congress) from wandering the paths of patriotism, or sacrificing public good to private ambition." Daniel Webster of Massachusetts agreed, noting that "The clause only expressed the wish that his remains should be buried without pomp or parade, but did not prohibit their removal." Tazewell rose again to try to counter Webster's reasoning, responding that while Washington did not explicitly prohibit the removal, he deliberately expressed his wish that he be buried in the old vault. Nonetheless, the House passed the resolution on February 14 by a vote of 109-76. The Senate followed suit, approving the application 29-15.2

Virginia Governor John Floyd was one of the first individuals to hear the news of the vote. In response, Floyd wrote to the House of Delegates and the Senate, encouraging them to unite against such an intrusion. Floyd argued that, "It is the province of Virginia to watch over the remains of George Washington. . .to you I appeal. . .the descendents of those men whose blood was poured out and mingled with the soil of Virginia in defense of liberty—that cause of which Washington was the soul." Archibald Bryce asked the delegates, "shall their sons consent that his remains be removed from the territory of Virginia; that his honored bones shall be placed in the hands of strangers, and their shrine be transferred to another soil?" The only way to stop the motion without violence would be to convince Washington's heirs to decline or for Congress to withdraw the action before the anniversary of Washington's birth on February 22.3

Virginia state delegates, however, were unaware that John Augustine Washington had already cordially refused the federal application. Nonetheless, Virginians unanimously approved a resolution that proclaimed "the tomb that enshrines him is sacred to Virginia. It is more especially sacred as the spot of final repose selected by the dying patriot himself. In the name of the good people of this commonwealth, we solemnly protest against the contemplated removal of his remains from our territory."

Federal officials moved forward with plans for the centennial celebration and parades, orations, speeches, and festivals marked the day across the country. Yet some prominent figures were disappointed that Washington's body could not unify Northern and Southern factions. In the national capital, former President John Quincy Adams attended a ceremony for Washington, and brooded over John Augustine's refusal. Adams explained, "I wish that this resolution might have been carried into execution, but this wish was connected with an imagination that this federative Union was to last for ages." While Adams' prediction was prescient, many did not associate the occasion with the issues that would eventually lead to the collapse of the Union. Rather, the day was wrought with expressions of patriotism and love for Washington, the national symbol of America.4

2. Ibid; the argument that Virginians and Southerners wanted to follow the will verbatim is an interesting one, especially considering the "without pomp or parade." Washington's funeral was not as simple as he might have desired.

3. Richmond Enquirer, "18 February 1832"; Charles Pinnegar, Virginia and State Rights, 1750-1861: The Genesis of a Doctrine (Jefferson, North Carolina:  McFarland and Co., 2009), 210-5. Pinnegar's research highlights Floyd's support of placing Virginian troops under federal authority, the expansion into the West, and the gradual emancipation of slavery in Virginia. These were Western positions, as Floyd was from western Virginia. Floyd's time as Governor and friendship with John C. Calhoun shifted his politics towards states’ rights, especially after the Nat Turner slave rebellion.