Given the large numbers of people served each day in the mansion, as well as the necessity of providing for over 300 enslaved and hired workers, raising livestock was a vital part of the story of both food and clothing at Mount Vernon. From information contained in George Washington's papers, it is evident that the cattle at Mount Vernon were diverse breeds. Following the Revolutionary War, there were between 300 and 350 head of cattle of all types (including bulls, draught oxen, steers, cows, heifers, and calves) at Mount Vernon.1 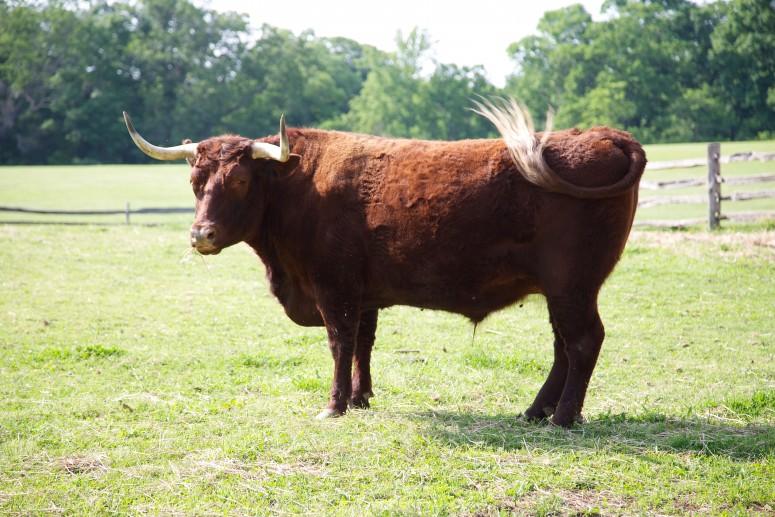 Washington often referred to his cattle as "black cattle," the standard terminology used to differentiate bovines from "white cattle" or sheep.2 There were few instances where Washington specifically described individual animals. For example, in 1785, the following oxen were living at Washington's Ferry Farm: six-year-old Darling was described as red and white, nine-year-old Bembo as white and red, Mark, age eleven, was black and white, and the "very old" Duke was a red brindle.3 The deaths of a "White steer" and a "black Cow" were reported in February 1787.4 Over a decade later, the cattle sold after George Washington's death included "1 Mottled Cow," three black steers, a black heifer, and nine red steers.5

For much of his life, George Washington tried to upgrade the quality of the cattle on his lands, through the use of well-bred bulls descended from English stock. In the fall of 1778, for instance, George Washington informed his brother-in-law Burwell Bassett that he had purchased some bull calves "of the English kind" and intended to give one to Bassett. Washington explained, "These being descended from Mr. Custis's English Bull are much more valuable than common Calves of the same age, inasmuch as they will improve the breed."6

Near the time of his retirement from the presidency, Washington investigated the possibility of purchasing English cattle from Henry Dorsey Gough who lived on the Eastern Shore of Maryland, who seems to have been an acquaintance of Thomas Peter, the husband of Mrs. Washington's second granddaughter. As he explained to Gough, "My stock of all sorts has been much neglected during my eight year[s] residence from home, and will take more time than in the usual course of nature will be allowed me, to improve them much; but with the means you have been so good as to furnish me, and other aids, I shall, by proper attention put my black cattle into a way of improvement."7

In order to recognize his own livestock, the plantation's cattle were branded by enslaved workers on their horns, buttocks, or shoulders with the mark "GW." The location of the mark indicated where the cattle were regularly pastured: on the left buttock for Dogue Run Farm, on the right buttock for the Neck Plantation, on the left shoulder for Muddy Hole Farm; and on the right shoulder for the mill.8 This was necessary because the pastures at Mount Vernon frequently sheltered animals belonging to other people, who did not pen their cattle. As one of the Mount Vernon managers lamented, "It is indeed very hurtfull to me to see so many Cattle belonging to other people constantly feeding on Your woodland Pastures, which I cannot remedy for sometime or untill the outside fence is made good..."9

Near the end of his life, Washington's plans for Mount Vernon called for all the cattle to be brought in by enslaved workers from their summer pastures by the first of November of each year. They were to be penned, housed in either barn stalls or sheds with thatched roofs, wooden floors, and bedding of cornstalks covered over with leaves, where they would be "secure from Snows, Rain and cold weather," and fed by enslaved individuals until the first of May. Throughout those months they were supposed to be watered each day, with care taken "in frozen Weather" to see that the ice was broken "so as to admit them to clean Water."

Beginning in May, the cattle were to be pastured in fallow fields so that their dung could serve as fertilizer for the next crop. Washington directed that no more animals be put in each field than its size could support, and the animal enclosures were to be moved once a week by enslaved people, in order for the field to be more evenly manured.10 Managers were instructed to "give the Cattle as much Salt as you judge necessary, preventing waste."11

The cattle at Mount Vernon were not always cared for to Washington's high standards. The day before his death, George Washington wrote a letter to his farm manager, James Anderson. Washington complained about the living conditions of the cattle at Union Farm, explaining that "Such a Pen as I saw yesterday at Union Farm, would, if the Cattle were kept in it one Week, destroy the whole of them. They would be infinitely more Comfortable in this, or any other weather, in the open fields—Dogue run Farm Pen may be in the same condition—It did not occur to me as I passed through the yard of the Barn to look into it."12