Cato was not the only classical figure idealized for republican virtue. Contemporaries also compared Washington to Cincinnatus, a legendary Roman general who was called out of retirement to lead the army in a time of emergency, but willingly relinquished power after winning the war.

During the winter of 1777 to 1778, Washington camped with his troops at Valley Forge, nearly twenty miles north of Philadelphia. The winter is best known for its harsh conditions, but Washington also used the time in camp to better train the army.

In May 1778, Colonel William Bradford, Jr. wrote to his sister from Valley Forge: "The Camp could now afford you some entertainment: the manouvering of the Army is in itself a sight that would charm. —Besides these, the Theatre is opened—Last Monday Cato was performed before a very numerous & splendid audience." At the end of the hard winter at Valley Forge, General George Washington defied a congressional ban on theatrical productions and entertained his men with a production of Joseph Addison's 1713 tragedy Cato.1 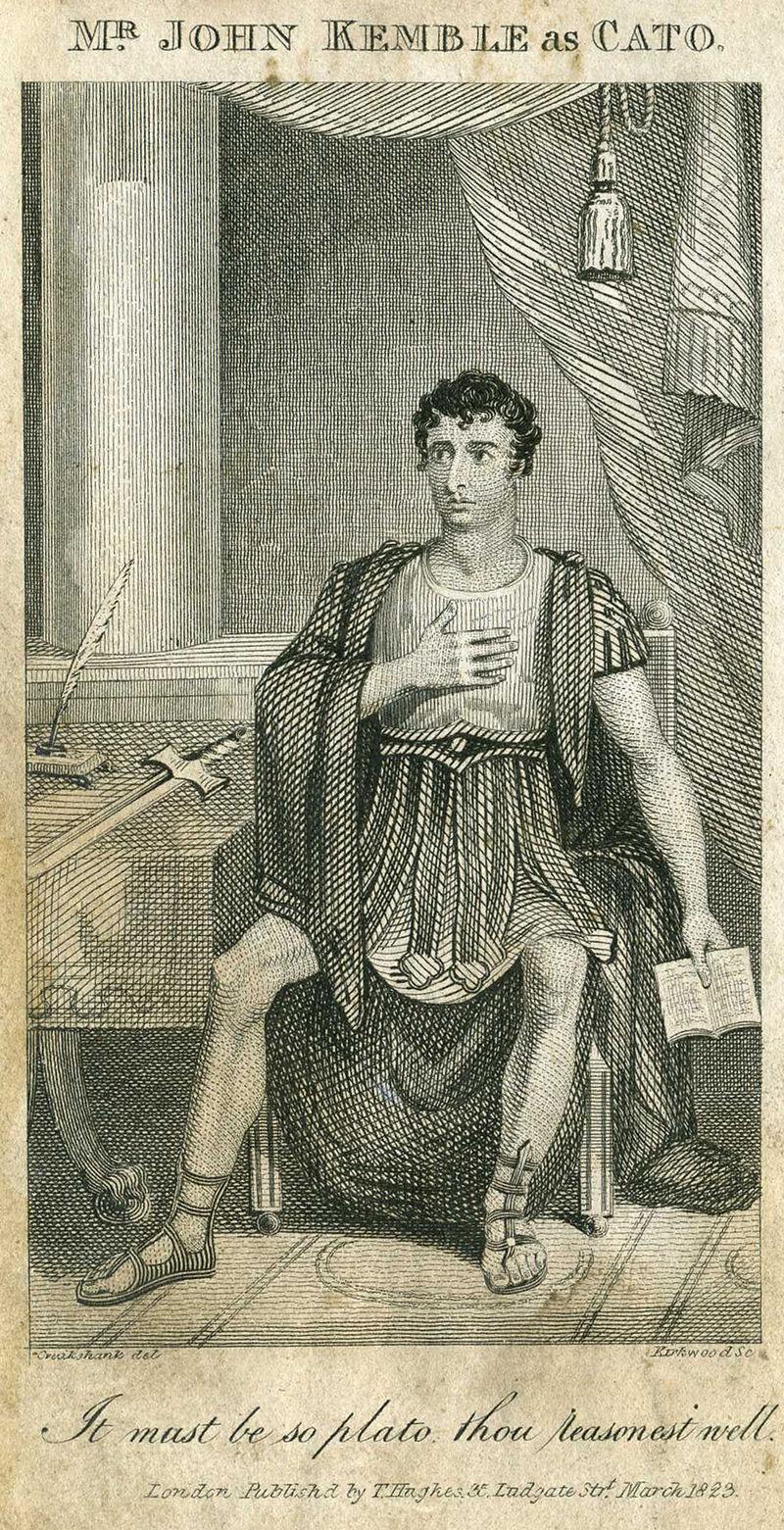 Addison's play is a dramatization of the last days of the Roman Senator Marcus Porcius Cato (95-46 BCE), who for Addison served as an exemplar of republican virtue and opposition to tyranny. In the Roman Civil War that followed Caesar's famous crossing of the Rubicon in 49 BCE, the patrician Cato joined the senatorial opposition to Caesar's tyranny. After the defeat of Pompey in the Battle of Pharsalus (48 BCE), Cato continued to hold out against Caesar at Utica in northern Africa, where he found an ally in the Numidian King Juba I. After a decisive defeat in the Battle of Thapsus (46 BCE), Cato committed suicide, as was considered proper for an adherent of Stoic philosophy.2

Washington shared Addison's enthusiasm for Cato's self-sacrificing republican virtue, and frequently quoted from Addison's play, both as commander-and-chief of the Continental Army and as President. There are, for example, marked similarities between his speech to the mutinous officers at Newburgh (March 13, 1783) and portions of Addison's Cato.3 In 1796, Washington wrote to Alexander Hamilton of his "determination ‘to seek the post of honor in a private station," announcing his intention to retire from office with a quotation from Cato.4

But Washington's first recorded reference to Cato is much more playful and amorous. In 1758, he wrote flirtatiously to Mrs. George William Fairfax: "I should think our time more agreeably spent, believe me, in playing a part in Cato, with the company you mention, and myself doubly happy in being the Juba to such a Marcia, as you must make."5 In Addison's play, Juba was in love with Marcia, Cato's daughter. Generally speaking, however, Washington’s identification is with Cato, the self-disciplined patriot prepared to give his life for the cause of liberty.

In a new epilogue written for a production of Cato in 1778, the poet Jonathan Mitchel Sewall explicitly equated Cato with Washington, Juba with Lafayette, and Caesar with King George.6 Sewall wrote:

Our senate, too, the same bold deed has done,
And for a Cato, arm’’d a WASHINGTON!
A chief in all the ways of battle skill’’d
Great in the council, glorious in the field! (25-28)

Scholars have generally seen the production of Cato at Valley Forge as an attempt to inspire the troops with a stirring dramatization of the self-sacrificing defense of republican principles against tyranny. Recently, however, Mark Evans Bryan has suggested that the production was intended for the officers, not the troops, and that it was "an emblem of gentility and a deeply attractive indulgence for the burgeoning and contested aristocracy of the Continental army."7 It is certainly the case that the historical Cato was not a democratic hero: he was a patrician who was fighting for the prerogatives of the Senate rather than for the freedom of the Roman people.

Notes:
1. Bradford's letter can be found transcribed in Mark Evans Bryan, "'Slideing into Monarchical extravagance"’: Cato at Valley Forge and the Testimony of William Bradford Jr.,” William and Mary Quarterly 67 (2010), 124-125. The most recent edition of the Cato is Joseph Addison, Cato: A Tragedy, and Selected Essays, eds. Christine Dunn Henderson and Mark E. Yellin (Indianapolis, Liberty Fund, 2004). The congressional ban on theatrical performances was enacted in October 1774 to "discourage every species of extravagance and dissipation;" see Heather S. Nathans, Early American Theatre from the Revolution to Thomas Jefferson (Cambridge, Cambridge University Press, 2003), 37.

7. Bryan, "'Slideing into Monarchical extravagance,'" 144. For the more traditional view of the Valley Forge Cato, see, for example, Randall Fuller, "Theaters of the American Revolution: The Valley Forge Cato and the Meschianza in Their Transcultural Contexts," Early American Literature 34 (1999), 126-146. Fuller writes: "For the ragged soldiers in Washington's camp, Addison's tragedy offered a salient version of national destiny characterized by self-sacrifice, republican virtue, and an almost boundless devotion to the principle of liberty" (128).