Washington accepted command of the Continental Army on June 16, 1775. In his acceptance speech, Washington sounded the appropriate chords of humility in stating, "I am truly sensible of the high Honor done me in this Appointment… I do not think myself equal to the Command I am honored with."

Boston was the American headquarters of the British army in 1775. Troops occupied most of the city, while the navy blockaded its port. A siege of the city, directed by Washington, forced a British departure on March 17, 1776. 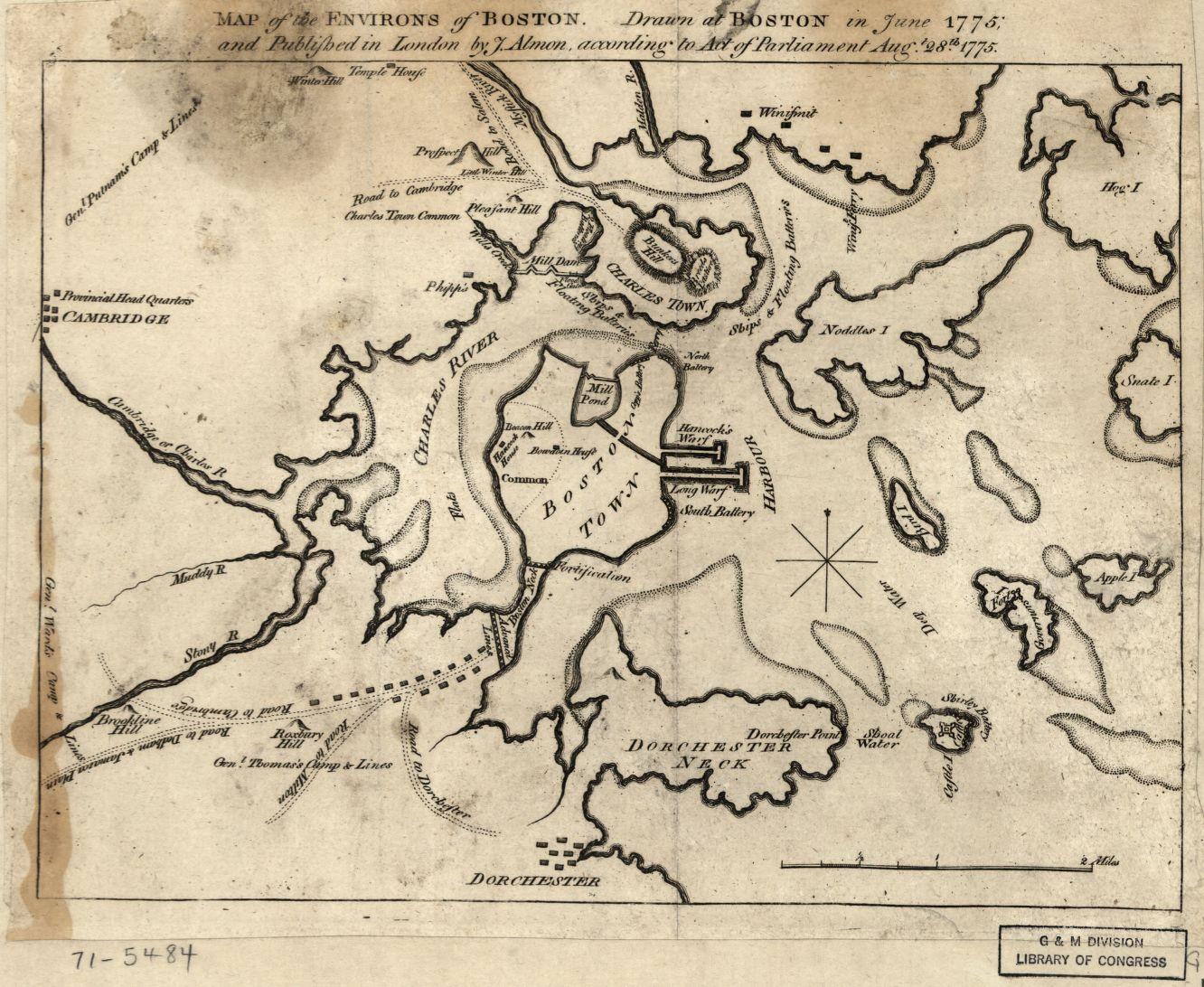 Cambridge, Massachusetts was incorporated in 1636 along the Charles River on the outskirts of Boston. In addition to being home to some of the world’s finest educational institutions, Cambridge served as the headquarters of General George Washington from July 1775 to April 1776 during the Siege of Boston.

John Winthrop, first governor of the Massachusetts Bay Colony, selected the site for what would become Cambridge in December 1630.1 Founded as Newtowne, the town was renamed Cambridge in 1638 to honor Cambridge University in England, where many of the new town’s Puritan leaders and inhabitants had attended. What would become Harvard College also began that year. It was the first institution of higher learning in America,and the only one until the founding of William and Mary in Williamsburg, VA in 1693.

Although not as well known as Boston, Cambridge played an important role in the Revolutionary War before Washington even arrived. Charles William Eliot II, presiding over the Cambridge Historical Society, once said that “the Revolution started in Cambridge in 1774.” Not all citizens supported the revolution, but these people were promptly run out. Wealthy families had moved to Cambridge from Boston for the relatively wide stretches of land on which they could build their estates, but these loyalist citizens (or “Tories” as they were called)  fled back to Boston when sentiment in Cambridge became fervently patriotic. Townspeople vandalized the house of the Massachusetts attorney general, Jonathan Sewall, and a handful of Tories who brought tea into Harvard hall were “nearly lynched” by students (faculty had to ban tea to keep order). The seat of the Massachusetts government moved to Cambridge when British General Thomas Gage occupied Boston.

After the battles of Lexington and Concord on April 19, 1775, news of these events led to 1,600-person Cambridge being inundated with volunteer soldiers.” Mansions that the Tories had vacated became barracks and hospitals. After Harvard relocated to Concord (to return in a year), its buildings were used for military purposes as well. General Artemas Ward attempted to “establish order in the chaotic makeshift camp,” made up of soldiers who numbered 16,000 by May—ten times the number of citizens. 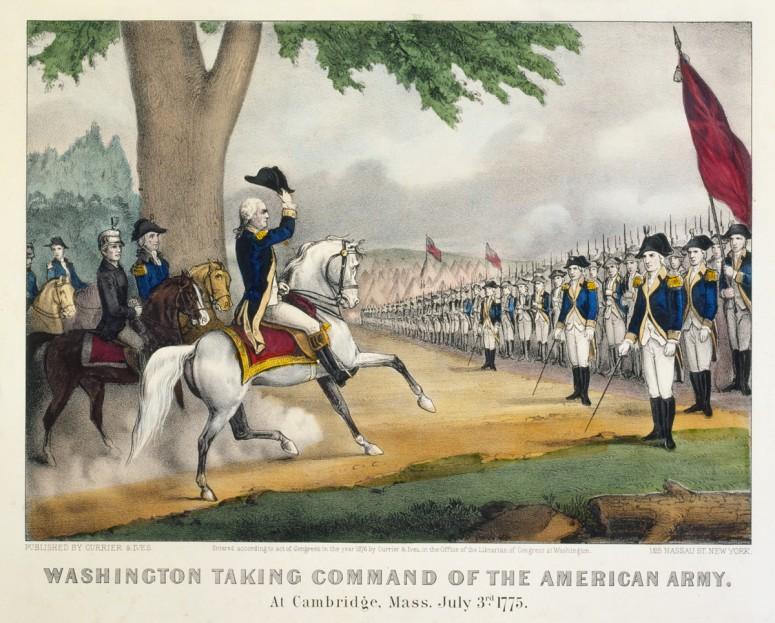 Washington arrived in Cambridge on July 2nd to take command of the newly-formed Continental Army. Writing his brother, Washington called the army he found “a numerous army of Provencials under very little command, discipline, or order.”2 Even the number of soldiers was unclear (Ward guessed 18-20,000, but Washington figured out two months later that his troops numbered fewer than 14,000).3 “The Village I am in,” Washington observed, “is situated in the midst of a very delightful Country, and is a very beautiful place itself.”4 The soldiers he described less favorably as “an exceedingly dirty & nasty people,” whose officers were of dubious ethics and “generally speaking [were] the most indifferent kind of People [he] ever saw.”5

Despite his apprehensions, Cambridge became America’s military headquarters when Washington took command the next day. Tradition holds that he received his command in an elaborate ceremony under an elm tree on the Common. However, the lack of military discipline and training in the army upon Washington’s arrival makes it unlikely that any proceeding could be described “ceremonious”.6 Even so, that elm tree was sufficiently symbolic in later years to warrant its inclusion on the city seal. The tree itself bore a granite tablet until the tree’s death in 1923. The tablet read: 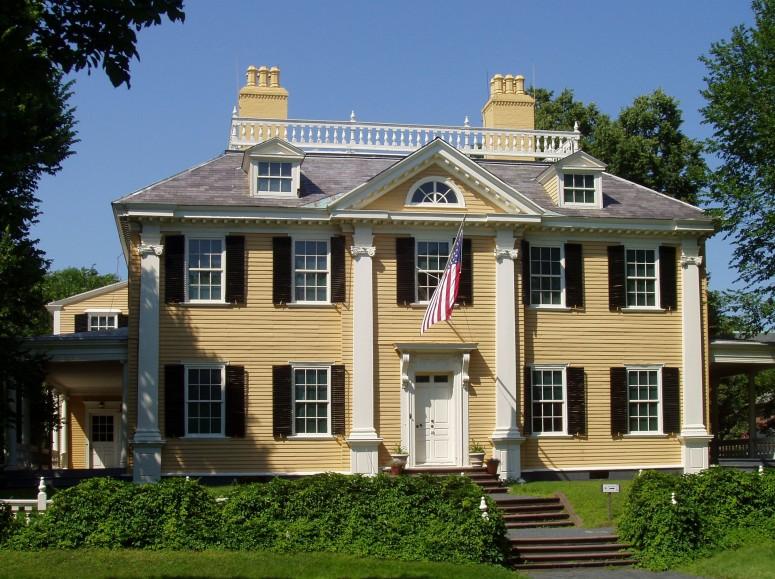 Instead, the passing of the command likely occurred in Wadsworth House, occupied by Samuel Langdon, Harvard’s then president. Langdon also offered Washington the use of this house as his headquarters. Uncomfortable confining Langdon to a single room of his own house, Washington instead chose the mansion of John Vassall, Jr., a Tory who had fled to Boston, as his headquarters.

From this location, Washington coordinated the Siege of Boston. After seven months, the British forces finally fled Boston on ships bound for Halifax and Great Britain. Washington and his army then left for New York City fearing a British attack there. Cambridge applauded the departure of the Continental Army, which had devoured much of the town’s resources. Citizens quickly resumed their normal lives and, except for the able-bodied men who left to serve in the army, they were little involved in the rest of the war. Washington returned one more time to Cambridge in 1789 during his presidential tour. Local militia saluted him on the Common and the board of Harvard College welcomed and honored him.8

7. Ibid. It is said that this inscription was written by Henry Wadsworth Longfellow.