Blacksmithing was an important craft activity throughout most of the Washington family's ownership of the Mount Vernon plantation. The earliest known reference to a shop dates to 1755. A blacksmith shop was also noted north of the Mansion on Samuel Vaughan's 1787 estate plan. A structure believed to be the shop also is depicted in a 1792 painting of the east front of the Mansion and north lane dependencies.

The shop was a completely wooden structure, supported by a brick foundation. Two post holes with the molds of ten-inch-square posts served as corner posts. These post molds were slightly more than eighteen feet apart and together defined the shop's north-south dimension. A fence connected with the shop's southeast corner and formed a fenced yard south of the shop opening onto the north lane.

The fence continued along the lane and joined with the servant's hall in a similar configuration, as depicted on the Vaughan Plan. However, the Vaughan Plan shows the shop extending west to a point opposite the north lane fence, which would make the building thirty feet long. This seems unlikely, and Vaughan may have portrayed the shop as longer to balance the house for families, a slave quarter which he also inaccurately shows as directly across the north lane. The Vaughan Plan also omits the north ha-ha wall, even though it is known to have been built by 1785 and terminated at the blacksmith shop. 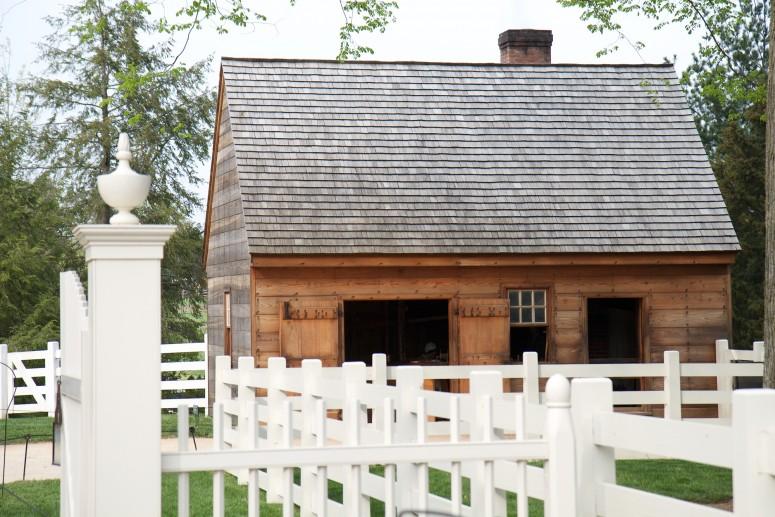 A 1768 reference noted that carpenters had recently completed work on the smith's shop. Excavation of the two structural post holes has yielded large amounts of smiths' waste, indicating that blacksmithing already must have been carried out there by the time those post holes were filled during construction of that structure. Therefore, it appears that this shop replaced an earlier shop, possibly the shed referred to in 1755, and it may relate to the carpenter's work in 1768.

Learn more about the many interesting and historic outbuildings on the Mount Vernon estate.