Benjamin Latrobe is widely regarded as the first professional architect in the United States. Latrobe was trained as an architect in his native country of England before immigrating to America in 1795, settling in Richmond, Virginia. Although Latrobe found employment scarce at first, he eventually was hired to design such prominent buildings as The Bank of Pennsylvania and the United States Capitol.

Latrobe was a good friend of George Washington's nephew, Bushrod Washington who provided Latrobe with a letter of introduction to facilitate a visit at Mount Vernon. Latrobe arrived at Mount Vernon on the morning of July 16, 1796 with Bushrod's letter of introduction in hand. George Washington came to greet Latrobe about ten minutes after he arrived and the two sat down in the portico to talk. In the next two hours, the pair spoke about a variety of topics, including life in Virginia, the proposed canal to be built near the Dismal Swamp, coal mines on the James River, and the silver mine at Rockett's Landing. Before departing, Washington invited Latrobe to stay for dinner. Latrobe wandered the Estate and took sketches in the next few hours before returning for dinner. 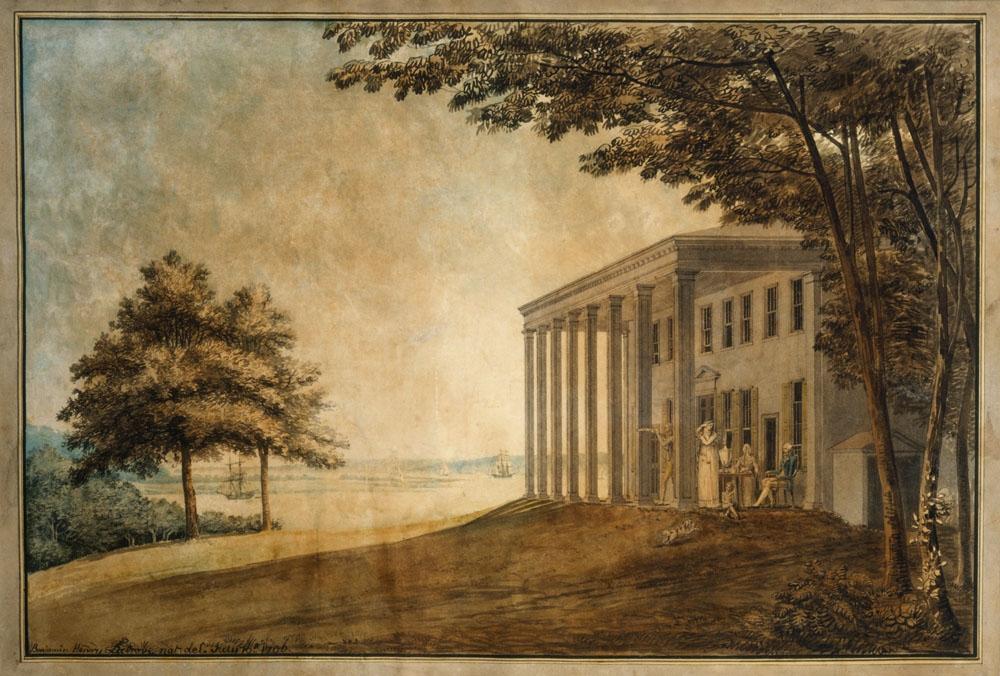 Dinner was served that day at three-thirty, half an hour later than usual. The family hoped that Tobias Lear would be able to return from Alexandria to join them for dinner. However, Lear did not arrive, and Latrobe sat down to dine with George and Martha Washington, Nelly Custis, Georges Washington Lafayette (the Marquis de Lafayette's son who was living at Mount Vernon), and Lafayette's elderly French tutor, Felix Frestal.

Latrobe noted that there was very little conversation at dinner with the exception of jokes that Washington exchanged with the young Lafayette. Coffee was brought to the family on the portico at about six, where Washington continued to converse with Latrobe. During this later conversation, the two discussed the cultivation of Indian corn, the effects of Hessian flies on crops, the best food to feed enslaved people, and the use of ploughs. Washington retired at around eight and Latrobe followed soon thereafter, having been invited by both Martha and George Washington to spend the night.