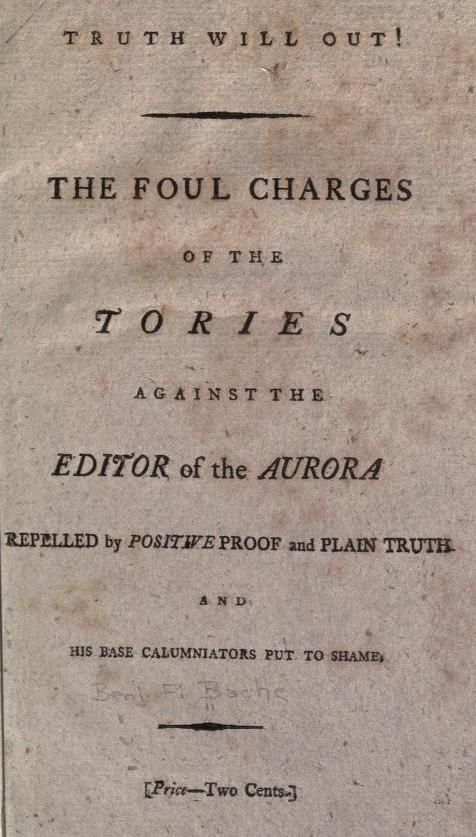 Benjamin Franklin Bache was the printer and publisher of the Philadelphia Aurora, a leading Democratic-Republican newspaper in the 1790s. During his short life, Bache became a vocal critic of the early Federalist Party and George Washington’s administration. He learned the art of printing from his grandfather and namesake, Benjamin Franklin.

Born in 1769 to Richard Bache and Sarah Franklin Bache, “Benny” met Benjamin Franklin for the first time at age five, when the elder Franklin returned to America after twelve years in England. Franklin would prove to have a lasting impact on his grandson’s life and character. Franklin had Bache accompany him on his diplomatic mission to France in 1776, and sent him to Geneva to be schooled in a republican environment.

Bache began publishing a newspaper in Philadelphia in 1790 called The General Advertiser, and Political, Commercial, Agricultural and Literary Journal. The paper’s format consisted of advertisements and current events interspersed with opinion pieces, typically with Jeffersonian or pro-France outlooks. Through friends and networks of likeminded people, Bache also acquired access to notable correspondence and the text of important documents and frequently published their contents.

As early as 1791, the Advertiser sometimes published opinions chiding what some saw as the trappings of monarchy in Washington’s presidency. Articles expressed distaste with the notion of making Washington’s birthday a holiday,1 and one article about president’s reception during his tour of the South stated: “we cannot but think the fashionable mode of expressing our attachment to the defender of the Liberty of his country, favors too much of Monarchy to be used by Republicans, or to be received with pleasure by a President of a Commonwealth.”2

Bache’s criticism intensified as it became clear Washington favored a Federalist vision of the nation, the advice of Alexander Hamilton, and a neutral stance on France. In October 1794 the Advertiser accused Washington of holding up legislative proceedings by being absent to attend to the Whiskey Rebellion.3 The next month, Bache renamed the paper the Aurora General Advertiser (also known as the Philadelphia Aurora), with a new mission to “diffuse light within the sphere of its influence [and] dispel the Shades of ignorance.”4

By Washington’s second term, Bache was leveling accusations of corruption and bad character against Washington, and the Aurora became a perpetual antagonist of the first president. Obtaining an advance copy of the Jay Treaty in June 1795, Bache caused a public uproar by publishing it himself, preempting an official release. This same year, Bache also began publishing and selling forged letters claimed to have been written by Washington during the war that made his motives for taking his commission appear self-interested.5 The Aurora berated Washington’s ownership of slaves, with ‘A Correspondent’ expressing disgust that “Liberty’s Apostle should be seen with chains in his hands, holding men in bondage.”6 An article by “A Calm Observer” accused the president of withdrawing “more money than he was legally entitled for his first term of service.”7 Even after Washington had ended his presidency, Bache pursued him, publishing a bilious pamphlet that summed up the former president as “a Virginia planter, by no means that most eminent, a militia-officer ignorant of war both in theory and useful practice, and a politician certainly not of the first magnitude.”8 There is evidence that Washington monitored the Aurora and resented Bache for his continuous criticism. He wrote of Bache by name in several correspondences, and in his final letter mentioning Bache described him as “no more than the agent or tool of those who are endeavouring to destroy the confidence of the people in the officers of Government.”9

Bache would become an equally vocal critic of the Adams administration, provoking his arrest under the Sedition Act in June 1798. Before his day in court, Bache succumbed to a yellow fever epidemic in September 1798 at the age of 29. As a strong critical voice against the Federalist Washington and Adams administrations, Bache's Aurora was the most popular and well-known Republican newspaper of the early 1790s. At its peak, the Aurora had 1,700 subscribers, more than three times the average periodical of the day. Although often dismissed as a man on the wrong side of history, Bache has enjoyed renewed interest in recent years, celebrated as an early champion of freedom of the press and for his uncompromising idealism and outspokenness.

8. Benjamin Franklin Bache, Remarks Occasioned by the Late Conduct of Mr. Washington, As President of the United States (Philadelphia, 1794), 30.

Rosenfeld, Richard N. American Aurora: A Democratic-Republican Returns: The Suppressed History of Our Nation's Beginnings and the Heroic Newspaper That Tried to Report It. New York: St. Martin’s Press, 1997.