Beer was a favorite drink of George Washington, as it was for many people living in eighteenth-century America. According to visitor Joshua Brooks, both beer and porter were among the beverage choices offered during a Mount Vernon dinner in 1799. A clergyman who knew Washington during the presidency recorded that he habitually "had a silver pint cup or mug of beer, placed by his plate, which he drank while dining."1 Many years later, Martha Washington's grandson noted that Washington generally "drank a home-made beverage" at dinner, which was probably a reference to beer brewed on the estate.2

Washington not only drank beer himself and had it served it to his guests, but it was also one of the items provided for voters when he was a candidate for political office. Washington's 1758 election to the House of Burgesses cost him 39 pounds, 6 shillings, a sum, which bought him "a hogshead and a barrel of punch, thirty-five gallons of wine, forty-three gallons of strong beer, cider, and dinner for his friends."3

In fact, virtually everybody, of all ages and social classes at Mount Vernon drank beer as a matter of course during this time period. George Washington noted in a letter to one of his farm managers that his white servants customarily received a bottle of beer a day, with each bottle containing one quart of liquid.4

Throughout George Washington's life, beer was both made at Mount Vernon by enslaved workers and purchased for use at his table. On the last page of a manuscript notebook kept by Washington in the late 1750s is a recipe for small beer, which was a weak beer consumed by servants, enslaved people, and children, because of its lower alcohol content.5

Strong beer was probably also produced at Mount Vernon during this early period as well. In 1761, about two years after his marriage, George Washington purchased a cask for holding strong beer, which presumably had been made on the estate by enslaved workers.6 A popular English cookbook owned by Martha Washington contained detailed instructions for brewing, as well as recipes for reclaiming beer that had spoiled.7 Lund Washington, who was George Washington's cousin and estate manager during the American Revolution, once wrote about using persimmons to make beer, explaining that "I find from experience there is a fine spirit to be made from persimmons, but neglected to gather the item for that purpose; only got some for the purpose of making beer, but next fall if I live, every one on the land shall be gathered."8

Beer was made at Mount Vernon for the Washingtons' table, but it may have been made by hired servants and enslaved people for their own use, as well. In the employment contract between George Washington and one of his farm managers, James Bloxham, Washington agreed that after Bloxham's family arrived from England, they would be given "as much Bran as is sufficient to brew Beer for his family, use."9 There is also some evidence that the enslaved workers at Mount Vernon may have brewed their own beer. In the fall of 1798, George Washington paid Boatswain, a ditcher at the Mansion House Farm, in exchange for six pounds of hops, a primary ingredient in the production of beer.10 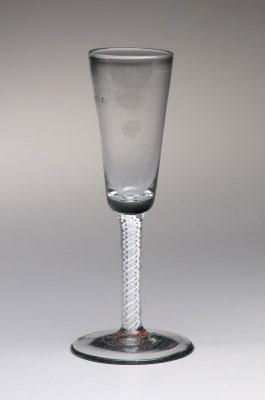 During the eighteenth century, a number of well-known English breweries were founded and George Washington is known to have purchased large quantities of beer and porter before the Revolution both from England and within America. Washington's purchases included: a hogshead of beer, a cask containing 133 bottles of beer, and another order for 144 bottles of porter in 1757, 139 bottles of beer in 1758, 144 bottles of "best porter" in 1759, and 1 hogshead and a barrel or small cask of porter in 1760.11 While these may seem like large amounts, beer was one of the most common beverages drank in colonial America. It also took months for an order to make the round trip from Virginia to England and back, so it was necessary to order a large enough supply to last six months or a year at a time.

Washington continued to buy comparable amounts of American porter after the Revolution, but appears to have made only two purchases of beer for that period—one in 1792 for an unspecified amount from R. Haines & Son, of Philadelphia, and another in 1793 on behalf of his nephew George Steptoe Washington and his brother.12 Given his fondness for beer, the paucity of beer purchases after the war, and the fact that hops were grown on the estate after 1785, it is probable that beer was being made at Mount Vernon in sizable quantities for "home use" after the Revolution. In a letter written by Washington to his farm manager in December 1793, Washington noted that the beer produced at Mount Vernon would no longer be bottled, "though it may be brewed as usual as the occasion requires."13

Washington received twelve "beer glasses, Mugs &ca" from England in 1757, which were augmented with a dozen beer and cider glasses ordered in 1760. Two sizes of white enameled beer glasses arrived in 1763, while another six were ordered in 1765, with the injunction that they be "handsome." Three years before the Revolution, Washington placed an order for six more "Neat and fash[ionabl]e Cut Beer Glasses," which he specified were to match a set of decanters. Still more were purchased on April 6, 1795 and December 19, 1796, presumably for the table in the executive mansion.14