View or download Mount Vernon's map of the Battle of Trenton.

Immediately following his famous crossing of the Delaware River, General George Washington marched the Continental Army to Trenton, New Jersey. The army's forces included horses, guns, wagons, and soldiers, stretching for nearly one mile. The weather was worse than it had been crossing the river, but the army continued to proceed as Washington rode up and down the column pressing his men to carry on. 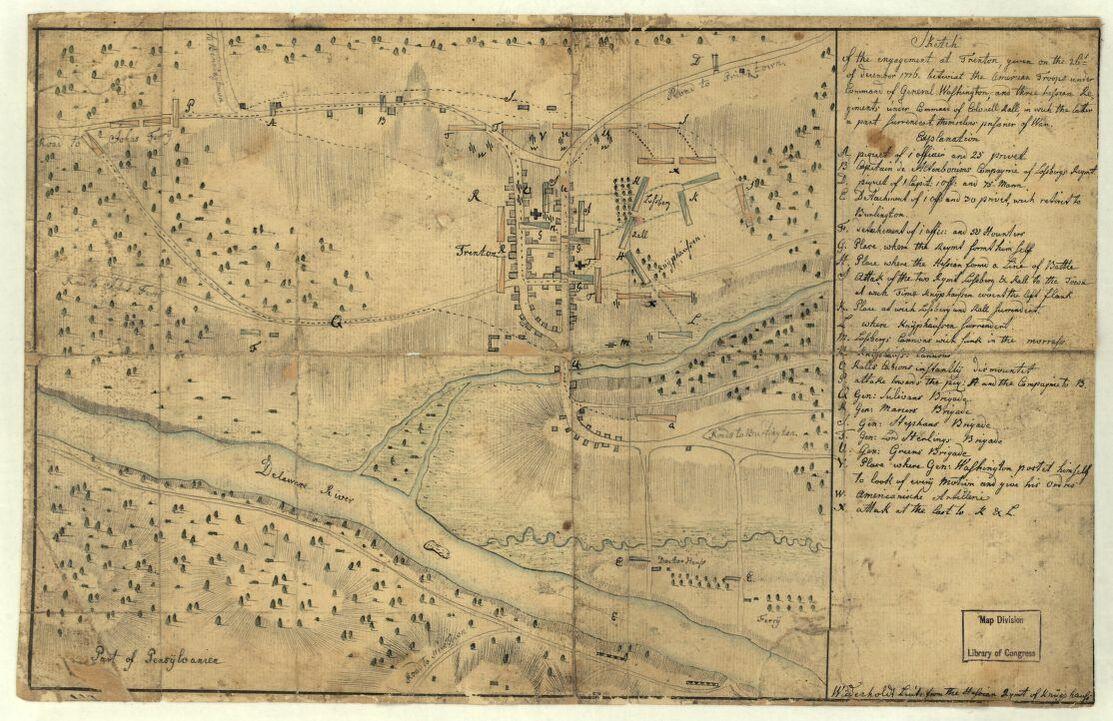 Shortly after eight o'clock on the morning of December 26, 1776, the Continental Army started its charge on the city. Three columns marched through thick snow with Washington personally leading the middle charge. As the soldiers pushed forward, artillery began to fire. At the same time, German drums urgently called the Hessians to arms. To his astonishment, Washington had maintained the element of surprise.

Immediately after the firing began, three Hessian regiments ran from their quarters ready to fight, quickly forming ranks. As the Hessians grouped, the Continental Army entered the city at two points: John Stark marched into the city on River Road from the west, while Nathanael Greene and Washington arrived from the north.

Andreas von Wiederholdt, a Hessian lieutenant, incorrectly reported to Colonel Johann Rall that the Continental Army had surrounded Trenton and there was no available route for a retreat. As a result, Rall decided to counterattack Washington within the city and not retreat across Assunpink Creek. This proved to be costly as Washington's forces occupied the highest ground in the city and had clear views of all of Rall's movements.

Time after time, Washington countered Rall's efforts to outflank the Continentals. Eventually, Washington's forces overpowered the Hessians. Rall was mortally wounded and many of his soldiers broke ranks, fleeing from the fighting. Normally very disciplined, Rall's regiment was confused and disoriented without their commander. They retreated to an orchard east of Trenton where they were forced to surrender.

Despite the large number of Hessians that escaped Trenton, Washington still won a crucial strategic and material victory. In only one hour of fighting, the Continental Army captured nearly nine hundred Hessian officers and soldiers as well as a large supply of muskets, bayonets, swords, and cannons. Washington ordered his soldiers to treat the Hessian prisoners in a humane manner, and the general quickly focused his attention on what to do next. Washington assembled all of his officers in Trenton to discuss whether they should attack another post, hold their position in Trenton, or retreat back across the Delaware River. Washington decided that because of the condition of his army, the best move was to return to their camps across the river.

When the Continental Army returned to camp on the Pennsylvania side of the Delaware River, soldiers were exhausted. They had marched and fought for two straight days through rain, snow, sleet, and hail. Washington knew that his army had far exceeded expectations at Trenton and that they faced many more challenges going forward. However, he also understood that doing nothing was even more dangerous. As a result, Washington shifted his focus to planning another engagement, at Princeton.

General Washington retreated across New Jersey and into Pennsylvania

After losing the Battle of Long Island to the British, they were chased until the British were satisfied that the American forces have lost.

The main force under Washington was to enter Trenton from the Northwest. Sullivan was to march around town and attack from the South. The remainder of the troops were supposed to occupy the Northeast.

It was a cold dark night and the river was running with flowing ice. At about 11 pm a heavy snow and sleet storm broke. Washington's force did not reach the east bank until around 3 am. Washington's men then marched to Trenton.

The Hessians attempted to form in the town but were under heavy artillery fire from the front and rear. The Americans occupied the houses and shot down the Hessian gunners and foot soldiers, during which Colonel Rahl was fatally wounded.

Surrender of Colonel Rahl of the Hessian Army

Rahl's troops retreated to an orchard South East of the town, where they surrendered.