The Stony Point Battlefield is currently maintained as a New York State Park. The site includes a museum and blacksmith's forge, and also hosts artillery demonstrations. 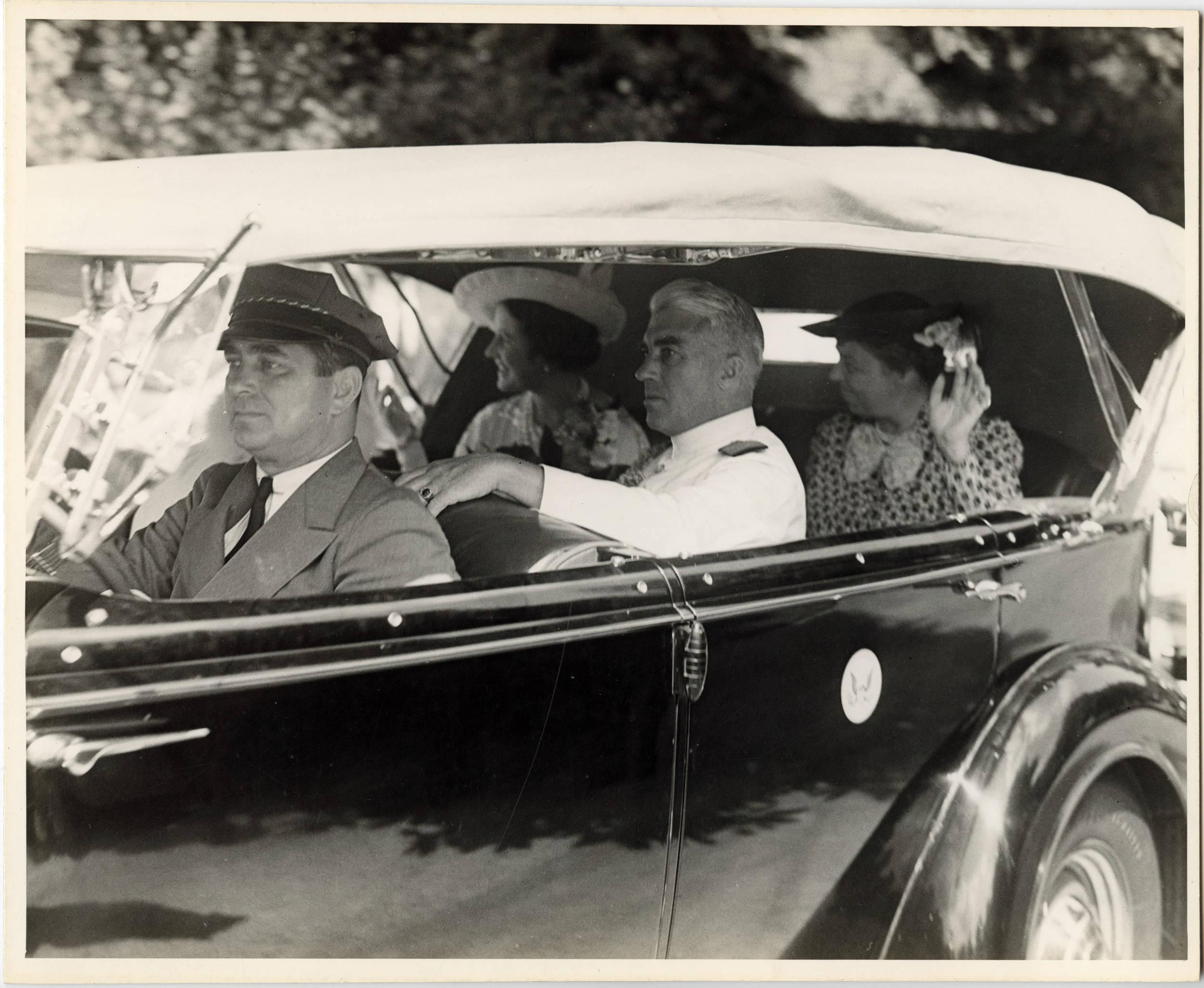 In early 1779, Parliament sent a directive to General Sir Henry Clinton, commander of British forces in America, to bring George Washington into a general action at the start of the campaign. The plan was to throw a force up the Hudson River to threaten the vital Hudson Highlands while a smaller force raided the Connecticut coast, ideally forcing Washington out of his West Point stronghold. General Clinton settled upon the capture of the important posts of Stony and Verplank Points. Those points were the terminals of the King’s Ferry, located respectively in the towns of Stony Point and Verplank, New York. The points formed the first narrowing of the Hudson north of Manhattan, only a half mile across; the ease of crossing and the depth of the water made it an ideal ferry. A small unit of militia was at Stony Point on the western shore and a detachment under Captain Thomas Armstrong manned small Fort Lafayette on the eastern, or Verplank side. On May 31st, the British hove into sight, landing forces on both sides of the river. The following day, Fort Lafayette fell; the militia at Stony Point had already retreated.1

From June 1st, the British had begun to improve their position and construct fortifications. When news reached Washington in early June in camp at Middle Brook, New Jersey he ordered most of the Continental Army to the Hudson Highlands in support of the vital fortifications at West Point. Washington immediately ordered the young and dashing Major “Light Horse” Henry Lee (father of Robert E. Lee) to provide reconnaissance on the Stony Point shore. Lee fulfilled this duty with the same alacrity shown at his raid on Paulus Hook later in the year. Work at Stony Point continued throughout June.2

Stony Point is a rocky prominence that extends a quarter-mile into the Hudson. At high tide, Stony Point, surrounded by marshes, became an island connected to the mainland only by a narrow causeway. At its highest, the point is 150 feet above sea level, and steep. Naturally defensible, the point was further improved by the addition of two rows of abatis (trees laid branch-side towards the enemy), felled from the site. The first abatis formed the “outer” works, and extended into the water south of the point. The second abatis was half way on the promontory and enclosed the “upper” works, or the “table of the hill”. 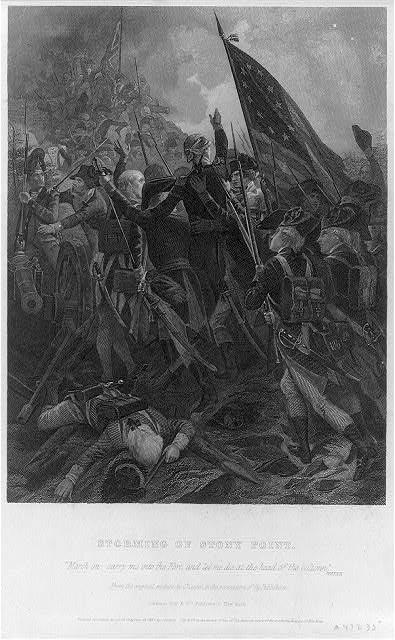 The first abatis had three embedded “fleches”; defenses open in the rear. The first mounted a 12 pounder; the second, two cohorn (4.5 inch) mortars; the third, two royal (5.8 inch) mortars and a 12 pounder. Guarding the sallyport into the upper works was a 3 pounder. In the upper works were two batteries; a left and a right, both mounting a 24 and an 18 pounder each. In addition, there was an 8 inch mortar covering the south of the post. A 12 pounder and a 10 inch mortar covered Verplank. In the outer works, four companies of the 17th Regiment of Foot were joined by two grenadier companies of the 71st (Fraser’s) Highland Regiment. In the upper works, four more companies of the 17th were stationed, along with a company of Col. Beverly Robinson’s Loyal American Regiment and a detachment of Royal Artillery. The troops totaled about 525; with them were nearly seventy women and children. The entirety was commanded by Lt. Col. Henry Johnson of the 17th. North of Stony Point lay the HMS Vulture, supported by a gunboat south of the point.3

While the enemy fortified, Washington sent Captain Allan McLane of Delaware as a spy to gather intelligence; Washington also personally surveyed the fort with Brigadier General Anthony Wayne of Pennsylvania. Wayne, a bold and fearless officer, had been selected to lead the newly formed Corps of Light Infantry. Composed of three complete and one incomplete regiments, the Corps of Light Infantry contained skilled soldiers drawn from their parent regiments and trained to fight with irregular (non-linear) tactics. Commanding the 1st Regiment was Col. Christian Febiger, a Dane fighting with Virginia; the 2nd, Col. Richard Butler of Pennsylvania; the 3rd, Col. Return Jonathan Meigs of Connecticut. Major William Hull of the yet to be formed 4th Regiment commanded a Massachusetts detachment.4

As the Lights trained near the ruins of Fort Montgomery, Washington and Wayne developed a plan to retake Stony Point. Using only Light Infantry, Wayne would attack at midnight. Two columns would advance with fixed bayonets only; a third would detach and provide a feint by firing. The main column of about 700 was composed of the 1st and 3rd Light Regiments to which was added the detachment under Major Hull. This column, led by Wayne, would wade through the river and climb the hill from the south. The second column of 300 was composed of the 2nd Regiment and so led by Butler. Major Hardee Murfree of North Carolina was to detach from Butler with his 150 strong detachment and form a central attack feint between the columns, providing a heavy fire to draw British attention from the flanks. Both non-firing columns had a twenty man “forlorn hope” to clear the way, followed by a 150 strong vanguard commanded in the main column by Lt. Col. Francois de Fleury of France and in the northern column by Major John Steward of Maryland. The whole Corps were to affix white paper in their hats or caps to identify themselves in the dark.5 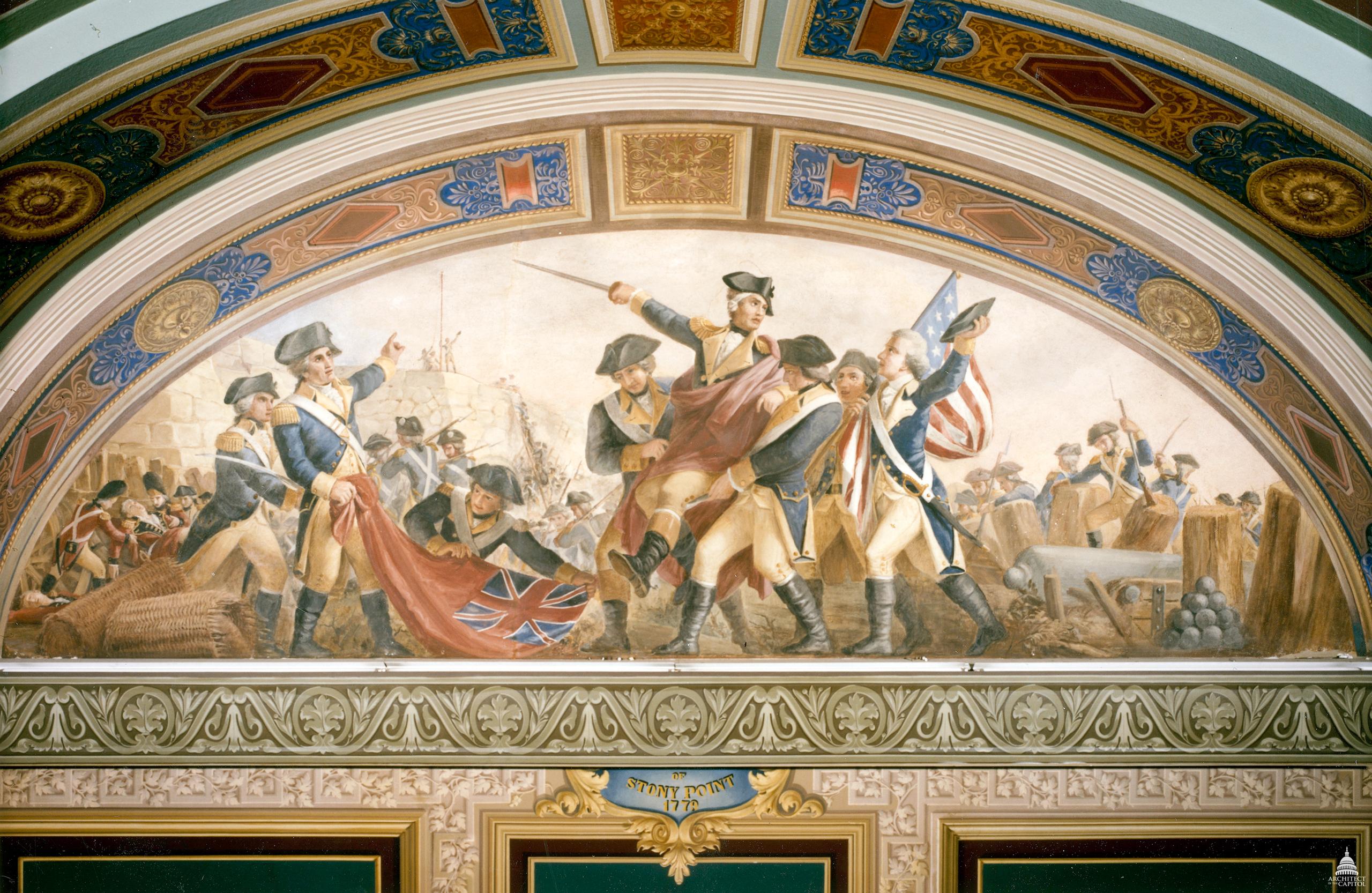 Just before the Americans got into position in the late hours of July 15th, a strong wind luckily drove off the British vessels. Just after midnight on the 16th, the Americans advanced. British sentries briefly skirmished with Murfree before withdrawing into the fort. British fire was heavy, but also confused; of the fifteen pieces of artillery, only two fired (one to no effect). Friendly fire was rampant among the British as the Americans stormed the fort. Within twenty-five minutes, the fort had fallen and Johnson surrendered to Febiger as Wayne had been grazed in the head with a musket ball. The Americans sustained fifteen killed and 83 wounded; the British had twenty killed and 63 wounded. For this action, Wayne, de Fleury, and Steward all received Congressional medals.6

On July 19th, the Americans, unable to hold Stony Point against a large British force coming upriver, decided to abandon the point after removing all prisoners, stores, and artillery. The British reoccupied the post and rebuilt the fortifications in a different way, under the oversight of Captain Patrick Ferguson. They continued to hold both points of the ferry until October 22, 1779, when they removed themselves to New York. Lt. Col. Henry Johnson later requested a court martial to clear his name of the defeat; he was found negligible in some aspects, but that in others he acquitted himself as a soldier ought to. After the embarrassment of Stony Point, and another similar venture at Paulus Hook in August, the British never again made a serious attempt on the Hudson River.7