On 2 January 1777, a Continental Army force led by George Washington successfully repulsed a British attack in Trenton, New Jersey by soldiers under the command of Lord Charles Cornwallis.

Looking to capitalize on his success at the first battle of Trenton on 26 December 1776, George Washington planned to move his army deep into New Jersey, hoping it would encourage militia recruitment and providing opportunities to harass overextended British supply lines. From 29 to 31 December, Continental Army forces crossed the Delaware River and assembled in Trenton. At the same time, the British commander of North American forces, Sir William Howe, dispatched Cornwallis to New Jersey to stabilize the situation there following the earlier American raid on Trenton. By 31 December, Cornwallis had 8,000 troops assembled at Princeton, New Jersey, about 10 miles from Washington’s position at Trenton.

Realizing the road to northern New Jersey was no longer open without a fight, Washington ordered a defensive line constructed along the Assunpink creek south of Trenton. He also dispatched 1,000 of his 7,000-man force halfway up the road between Trenton and Princeton. When Cornwallis began his march south on 2 January, he encountered the Continental Army’s advance troops around almost immediately. These American troops fought a delaying action for much of the day, forcing Cornwallis to deploy his forces again and again, wasting daylight precious to the British, and giving Washington’s troops along the Assunpink more time to improve their defensive works, especially their artillery positions. 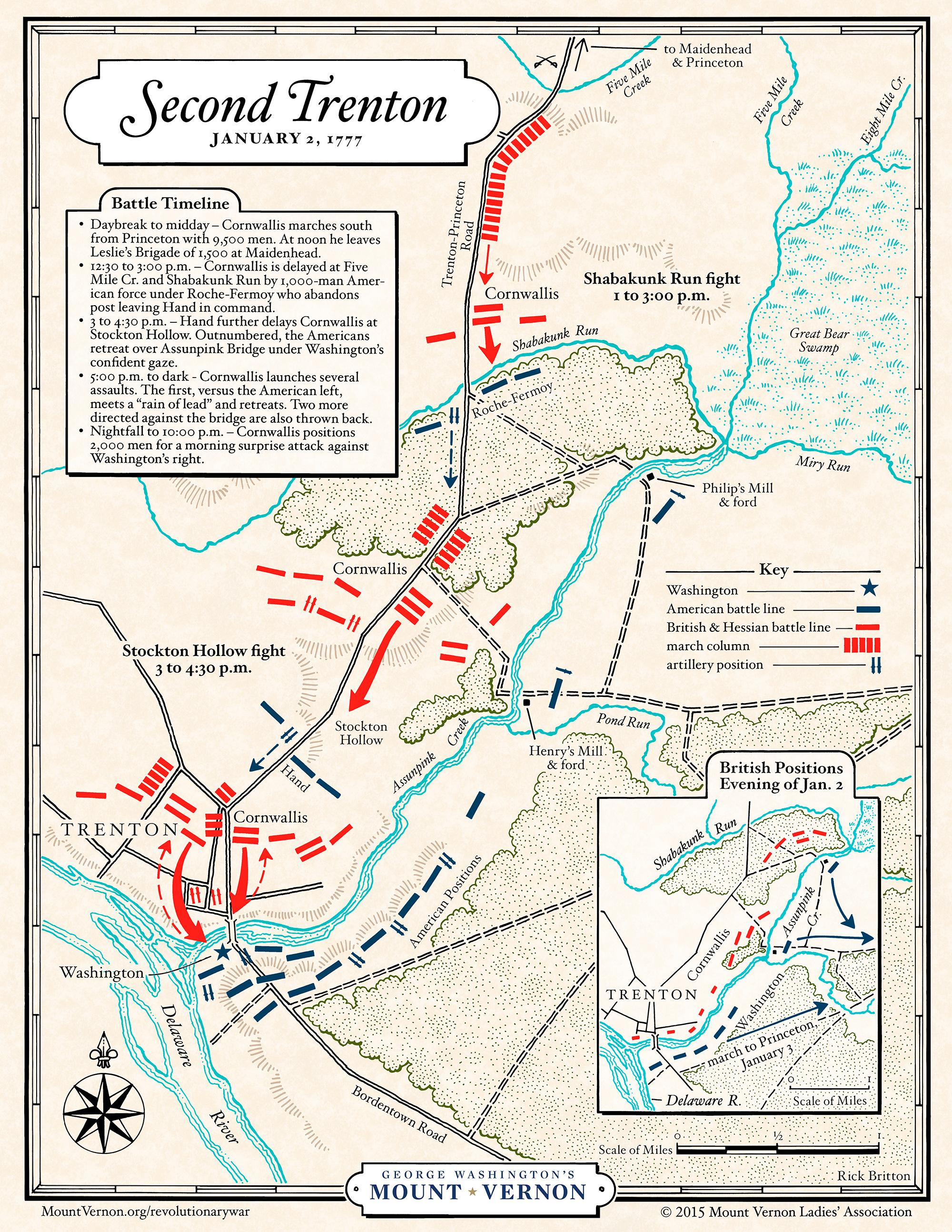 Washington’s troops along the creek defended four possible crossing points. The primary one was directly across from the town of Trenton at the Assunpink Creek bridge. Here Washington stationed the majority of his artillery. The largest concentration of infantry forces defended the Philip’s mill ford upstream of the bridge. The water here flowed quickly, but the ford was passable. Washington assigned the majority of his infantry the defend the Philip’s mill ford. A second ford, further upstream, was closest to the attacking British, but the speed of the water flowing through the creek here made it all but impassable, and Washington only assigned a token force to defend it. The last crossing point, downstream of the bridge, was easily crossable, but farthest from the British attack.1

Thanks to the American delaying action that had gone on since first light, British and Hessian forces did not reach Trenton until nearly 5 o’clock that night, the sun setting as their skirmishers began to poor into the town. Hessian grenadiers immediately tried to rush the narrow stone bridge across the Assunpink but were quickly meet by elements of the Continental Army’s Virginia brigade, who had orders to aim for the legs of their opponents, forcing the Hessians to help evacuate their wounded comrades or leave them for dead. As casualties piled up, the Hessians broke off their attack and British soldiers took their place. The British attacked three times across the bridge, each time met by the withering fire of the Virginians and the massive shotgun blasts of the Continental Army artillery’s canister rounds. One American soldier described the resulting aftermath: "the bridge looked red as blood, with their killed and wounded and red coats."2

With darkness fully settled in, both sides debated what to do the following day. On their march to the bridge, the British had spotted the fords over the Assunpink up stream of Washington’s main position at the bridge. Cornwallis decided to attack the fords at first light, wheeling Washington’s army back on itself and pinning it against the Delaware River on Washington’s left. Aware of this possibility, Washington decided on a bold plan to extricate himself from his dangerous position. Rather than fallback south towards Philadelphia, Washington would march north towards Princeton, aware that Cornwallis was not guarding a little-used road that would lead Washington to the town’s undefended east side. Once clear of Princeton and safely disengaged from Cornwallis, Washington could continue his original plan of marching to the New Jersey Highlands and threatening Cornwallis’ supply lines back to New York City.

Washington ordered camp fires burned high throughout the night to fool the British into believing his troops were resting along the Assunpink. At the same time, his army quietly marched northeast towards Princeton. When Cornwallis’ scouts crossed the fords the next morning, they found only deserted camps. Shortly after, Cornwallis heard cannon fire in the distance behind him and to his left. The Battle of Princeton had started, and Cornwallis was ten miles from where he should be.

2. Joseph White, An Narrative of Events, As They Occurred from Time to Time, in the Revolutionary War: With an Account of the Battles, of Trenton, Trenton-Bridge, and Princeton, (Charlestown: 1900) 77.

White, Joseph. An Narrative of Events, As They Occurred from Time to Time, in the Revolutionary War; With an Account of the Battles, of Trenton, Trenton-Bridge, and Princeton. 1900.

Wilkinson, James. Memoirs of My Own Times. Philadelphia: Printed by Abraham Small, 1816.