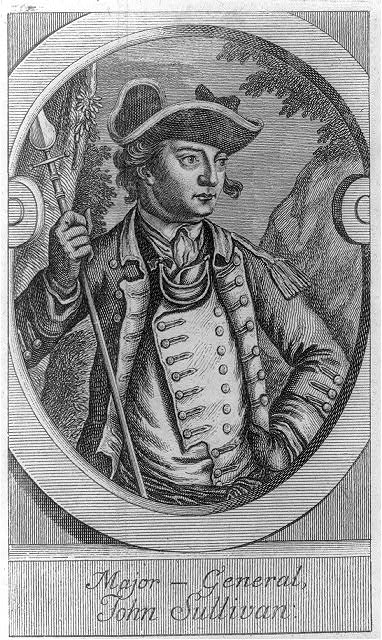 Ordered by General George Washington to harass combined Loyalist and Native American forces in Southern New York, General John Sullivan soon found his men in skirmishes throughout August and September of 1779. The largest of these was the Battle of Newtown, near Elmira, New York which took place on August 29. The battle resulted in a Colonial victory.

Having gathered 5,000 of his soldiers in Athens, Pennsylvania, General Sullivan and his column marched out of Fort Sullivan on August 26, 1779 aiming to destroy the towns and supplies of the Six Nations settled on the banks of the Susquehanna River. On August 29, a Sunday, advanced guards of Sullivan’s men encountered enemy pickets atop a hill--now known as Sullivan’s Hill--just outside of what is present day Elmira, New York. The joint Loyalist and Native American forces consisted of fifteen soldiers from the 8th Regiment of Foot as well as 250 militia members from Butler's Rangers under the command of John Butler and his son Walter.1 Joining them were one thousand Iroquois warriors commanded by Joseph Brant. From noon until three, Continental light infantry harassed the defenders on the hill.

At three in the afternoon, Sullivan and the bulk of his forces arrived and convened a Council of War. The plan of attack for the Continentals called for a demonstration on the center of the breastworks by units of light infantry under the command of Brigadier General Edward Hand. Meanwhile, the works would be flanked on the east and west sides of Sullivan’s Hill. On the west, soldiers of the First New Jersey under the command of Colonel Matthias Ogden would move up the hill. The eastern attack featured New York and New Hampshire troops commanded by Brigadier Generals James Clinton and Enoch Poor, respectively.2 The plan assumed that the Loyalists and their Iroquois allies would be caught by surprise on their flanks while defending against Hand’s attack on the center. Long range artillery fire from ten bronze fieldpieces would provide support with other infantry regiments held in reserve.3

In order to work, the plan required both luck and timing, neither of which occurred for the Colonials. Facing marshy land and a steep climb, the men of New York and New Hampshire found their attack severely slowed. Further, the 2nd New Hampshire regiment came under a stern counter-attack by Brant's warriors. Assistance from the 3rd New Hampshire as well as two New York regiments saved the 2nd from Brant’s attempted encirclement.4 Fearing encirclement due to the shells bursting, many of the Loyalist's Iroquois allies were routed. While the New Jersey regiment and Hand’s demonstration succeeded in breaking the defenders, the slowed arrival of soldiers on the eastern slope meant that the Loyalist-Iroquois forces, while flanked, was still afforded an avenue of escape.

The result was a major defeat for the Loyalists. Utilizing the gap in the Continental Line, Loyalist forces were able to fall back from the battle and rejoin the bulk of the British forces; the retreat left numerous villages open to attack. Sullivan's expedition took advantage of this opening, and torched three Cayuga towns and destroyed all of the food and supplies in the area that could not be pilfered.5 With the morale of the Loyalists at an all-time low, Sullivan's forces pursued for another three weeks and the campaign ultimately successful.

The Battle of Newtown was the most significant engagement of the Sullivan Campaign and marked the only defensive stand taken by the Iroquois.6 The Continental losses numbered around forty-three, including eleven killed, seven of whom lost their lives during the counterattack by Joseph Brant against the 2nd New Hampshire.7 The combined forces of the British and Iroquois suffered thirty-five casualties with seventeen killed.8 Additionally, the morale of the people of the Six Nations was crushed. Losses of life, land, and property weighed heavily on their minds, and the Six Nations no longer played the role of strong allies to the Loyalist forces. While the frontier war against the Loyalists and Iroquois would continue, the colonists had achieved a major victory. For George Washington, the continued attacks on Iroquois villages caused for him to obtain a dangerous reputation amongst the tribe. A letter from the Seneca chiefs in 1790 told Washington that his name,  or the Seneca name "Town Destroyer" that had been given to him in in 1753, caused women to "turn pale" and children to "cling to the necks of their mothers."9

8. Fischer, 93. The number of Iroquois casualties included, according to one account, one woman.

9. "To George Washington from the Seneca Chiefs, 1 December 1790," Founders Online.