George Washington prided himself on his ability to control his temper. Few people beyond his immediate family and closest aides ever saw him lose his composure. But on the afternoon of June 28, 1778, Washington exploded in a rage at his second in command General Charles Lee, in a moment that became legendary among the officers who were present.

Washington had sent Lee with a small force ahead of the main body of the Continental Army to harass the British army under General Sir Henry Clinton. Lee was ordered to engage the redcoats until Washington could bring the rest of the army from Valley Forge where they had spent the previous winter and spring. But after several hours of fighting, and with the main army nowhere in sight, Lee retreated from the battlefield. When Washington finally met up with Lee on the road near Monmouth Courthouse, New Jersey, he cursed his second in command. Washington was so vehemently upset at Lee for fleeing from the British that, as General Charles Scott reported, the "leaves shook on the tree."1 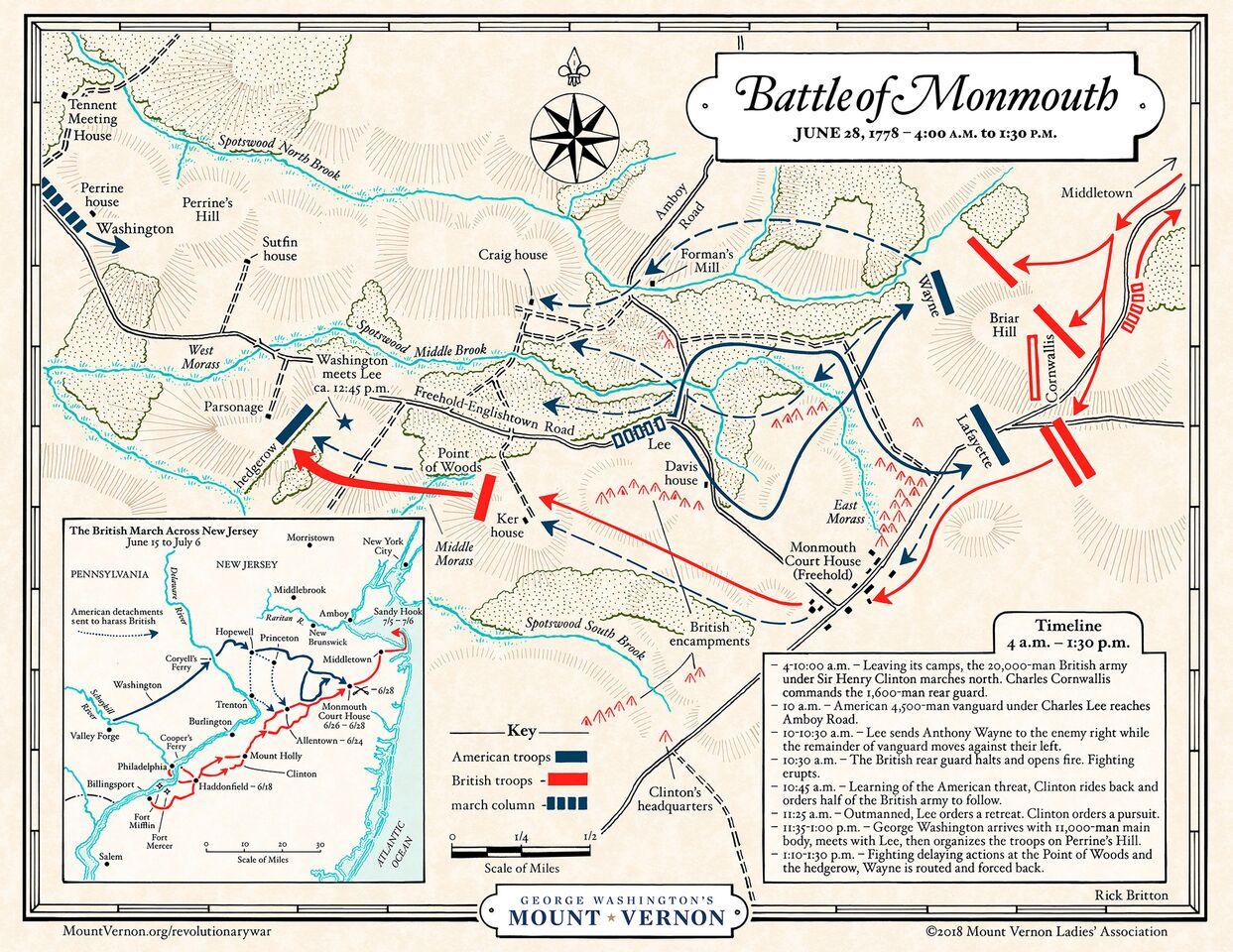 Washington's fury stemmed in part from his regret at having appointed Lee in the first place. When Washington initially proposed attacking the British on their way through New Jersey, Lee scoffed at the idea. Along with General Henry Knox, Lee argued that it would be madness to confront 15,000 British and Hessian troops. In contrast, the Marquis de Lafayette, Nathanael Greene, and Anthony Wayne urged Washington to strike at the British columns while they were strung out across the New Jersey countryside. Washington finally decided to march his men from Valley Forge toward the retreating British. A 5,000 man force would move ahead, harassing the British rear until a larger body of 6,000 troops could join them. Lee reluctantly agreed to lead the advance party only after Washington offered the command to Lafayette.

While his disgraced second headed behind the lines, Washington rode through the ranks on his white charger, inspiring the soldiers with his confidence. Lord Stirling's men were placed on the left, Greene's soldiers on the right, and part of Lee's original force were placed under the command of Wayne and located in the center. Lafayette stood in reserve with the rest of Lee's forces. The British, led by General Charles Cornwallis, struck first at Lord Stirling, then at Greene, before attacking Wayne in the middle. By evening both sides were exhausted.

Many men had been killed or wounded, while still more had collapsed in the 100 degree weather. Washington's own horse had died in the heat. Noticing British campfires burning in the distance, Washington decided to continue the fight in the morning. But at sunrise, he realized that the redcoats had kept their fires burning as a ruse and were safely on their way to New York. While the British had escaped, the Americans claimed victory in the Battle of Monmouth and Washington was lauded for his bravery. Lafayette later recalled, in regards to Washington’s service at Monmouth that, "I thought then as now I had never beheld so superb a man."2