Historian and author Joe Ellis describes the 1776 New York Campaign - the campaign that almost led to the destruction of the Continental Army and the career of George Washington. 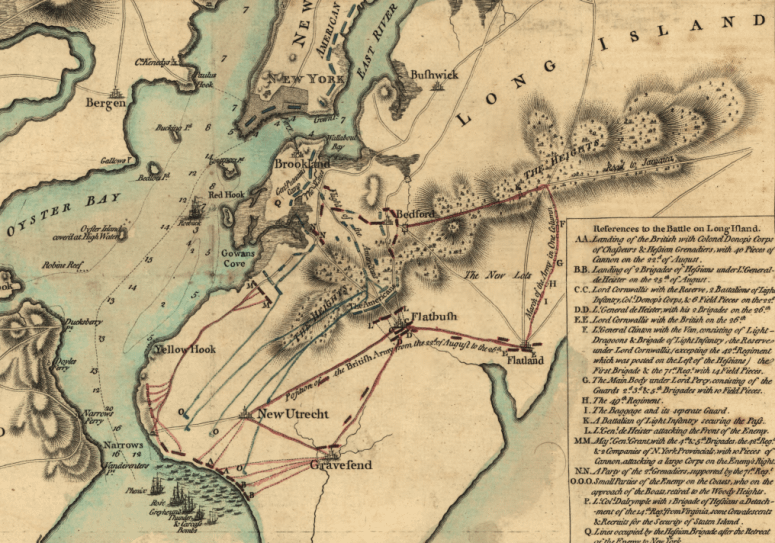 After the British evacuated Boston on March 17, 1776, General George Washington guessed correctly that their next target would be New York. By mid-April, Washington had marched his 19,000 soldiers to Lower Manhattan. He strengthened the batteries that guarded the harbor and constructed forts in northern Manhattan and on Brooklyn Heights across the East River on Long Island.

Washington waited throughout June for the British to appear, hoping that somehow his undisciplined troops could hold off an attack, which he was certain would come in Manhattan. In early July, 400 British ships with 32,000 men commanded by General William Howe arrived at Staten Island. When Howe offered a pardon to the rebels, Washington answered, "Those who have committed no fault want no pardon."1 While he was still convinced that the British would attack Manhattan, he sent more troops to Brooklyn.

Washington placed General Israel Putnam in charge of Brooklyn Heights and stationed General John Sullivan to the south and Lord Stirling to the southwest on the Heights of Guan. He posted guards along the main roads leading through the heights, but failed to secure the rarely used Jamaica Pass to the east. This proved to be a costly mistake since General Howe planned to lead 10,000 men through the pass on the evening of August 26 and attack the Americans on Brooklyn Heights from the rear. At the same time, General Leopold Philip Von Heister would launch his Hessians against Sullivan's troops, while the redcoats of General James Grant would attack Stirling's position. Early on the morning of August 27, British soldiers fired on American pickets stationed near the Red Lion Tavern at a crossroads in Brooklyn. Washington hurried across the East River from Manhattan but could do little more than observe the fight from a redoubt on Cobble Hill. Sullivan's men fought bravely but were cut down by Hessian artillery and bayonets. When he realized that the main British force had come through the Jamaica Pass and would soon surround him, Sullivan ordered his men to retreat to Brooklyn Heights before he himself was captured.

General Stirling held off the British for several hours but retreated when he also realized that he would be surrounded. He led 400 Maryland soldiers in a desperate fight at the Old Stone House, giving his soldiers time to flee before he was taken prisoner. Washington, who looked down on the terrible scene could only remark, "Good God, what brave fellows I must lose."2

In this video from Mount Vernon on Vimeo, Joe Ellis, author of Revolutionary Summer, discusses George Washington's challenges, mistakes, and lessons learned during the important New York Campaign of 1776.

General Howe halted the fighting by the early afternoon and directed his men to dig trenches around the American position on the next day. Before they could be surrounded, Washington ordered his men to evacuate Long Island. From late in the evening of August 29 to dawn on the following morning, Washington watched as 9,000 Continentals were rowed back to Manhattan. As the sun came up, a fog miraculously descended on the remaining men crossing the river. According to eyewitnesses, George Washington was the last man to leave Brooklyn.