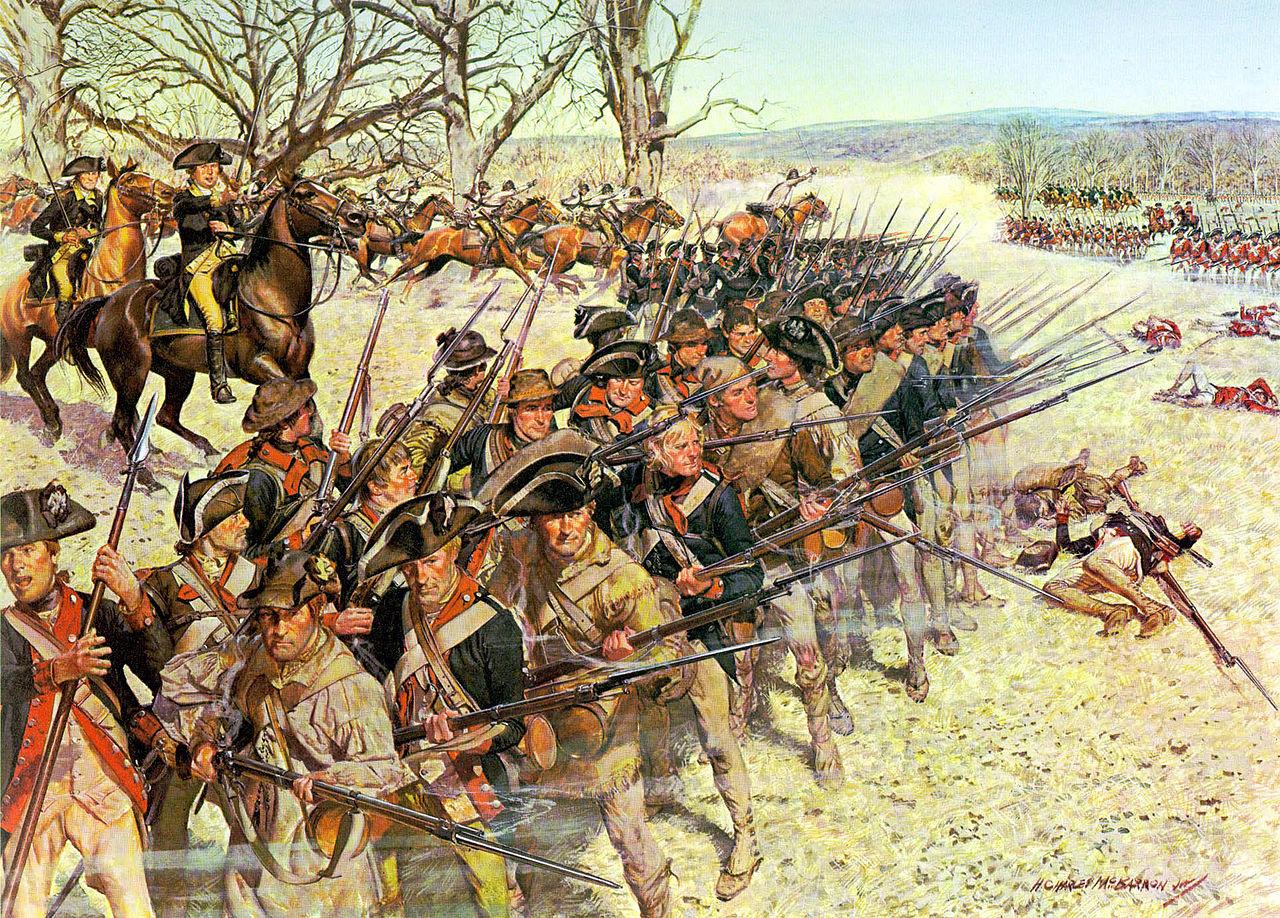 The Battle of Guilford Courthouse was the turning point of the Southern Campaign of 1780-1781.  Though the British could claim victory, they paid a high price for nothing more than command of the field.  Following the battle, the British Army in North Carolina was so depleted that General Charles Cornwallis was forced to abandon his hard-won gains and regroup his army in Wilmington.  While the British licked their wounds, General Nathanael Greene’s army proceeded to isolate and destroy British and Loyalist garrisons in the state’s interior, confining British control to the coasts.

General Nathanael Greene succeeded General Horatio Gates as commander at the request of George Washington on December 2, 1780.  He assumed command of the Southern Army, which consisted of a mere 2,000 Continental regulars.  Fortunately for the American cause, British atrocities in the south had incensed the local populace, and Greene had little trouble gaining support from local guerrillas who had already fought at Kings Mountain.  Daniel Morgan's venerable rifle corps was also attached to the southern army much to Greene’s delight.  Greene proceeded to boldly divide his army in the face of a superior enemy force hoping that it would force Cornwallis to divide his own army in hostile and unfamiliar country.  Daniel Morgan took a detachment to the southwest, luring a British force under Col. Banastre “Bloody Ban” Tarleton after him.  Morgan’s mixed army of 700 regulars supported by roughly 300 militia routed Tarleton’s 1,100 man army at Cowpens on January 17, 1781, killing or capturing 800 men.1

The humiliating defeat at Cowpens spurred Cornwallis to leave his position at Winnsboro to attack Greene.  Greene’s army led Cornwallis’s column deep into the interior of North Carolina, which put such a strain on the British supply lines that Cornwallis ordered the destruction of all heavy baggage.  What followed became known as the “Race to the Dan,” as Greene’s army traveled with the utmost speed across North Carolina past the Dan River into Virginia.  The British had been stretched to their limit by the chase, and their supply lines were under constant attack by American guerrillas.  Cornwallis ordered his exhausted men to abandon the chase in order to march to Hillsborough to regroup and rally Loyalist elements there.2

Once news of Cornwallis’s counter march reached him, Greene reentered North Carolina to put pressure on isolated British garrisons, gather supplies, and prevent British recruitment of Loyalist militias.  Throughout the second week of March in 1781, Greene continued to receive reinforcements until his army swelled to roughly 4,400 men.  He made camp near Guilford Courthouse and prepared for upcoming operations against Cornwallis.  The British only numbered 1,900 men, but they were all seasoned regulars. Cornwallis, eager for a decisive battle, marched within eight miles of Greene's position at Guilford Courthouse on March 14, 1781.

Greene was also eager for a fight, as he believed “if we were successful it would prove ruinous to the enemy, and if otherwise, it would prove a partial evil to us.”3 The first British scouts were sighted by American sentries at 2 a.m. on the morning of March 15.  Greene’s force was mainly composed of militia from Virginia and North Carolina, with a core of Continental Regulars of varied origin.  Upon sighting the British vanguard, the Southern Army was formed into three lines.  The first line comprised the North Carolina Militia under Generals John Butler and Thomas Eaton.  Four hundred yards behind them was the second line, which was made up of two brigades of Virginia militia under Generals Edward Stevens and Robert Lawson.  The last line held the Continental regulars, mostly from Virginia and Maryland.  The regulars were joined by riflemen, light infantry, and dragoons on the flanks.  Greene deployed his three lines on the face of a hill, each roughly 300-400 yards apart.4 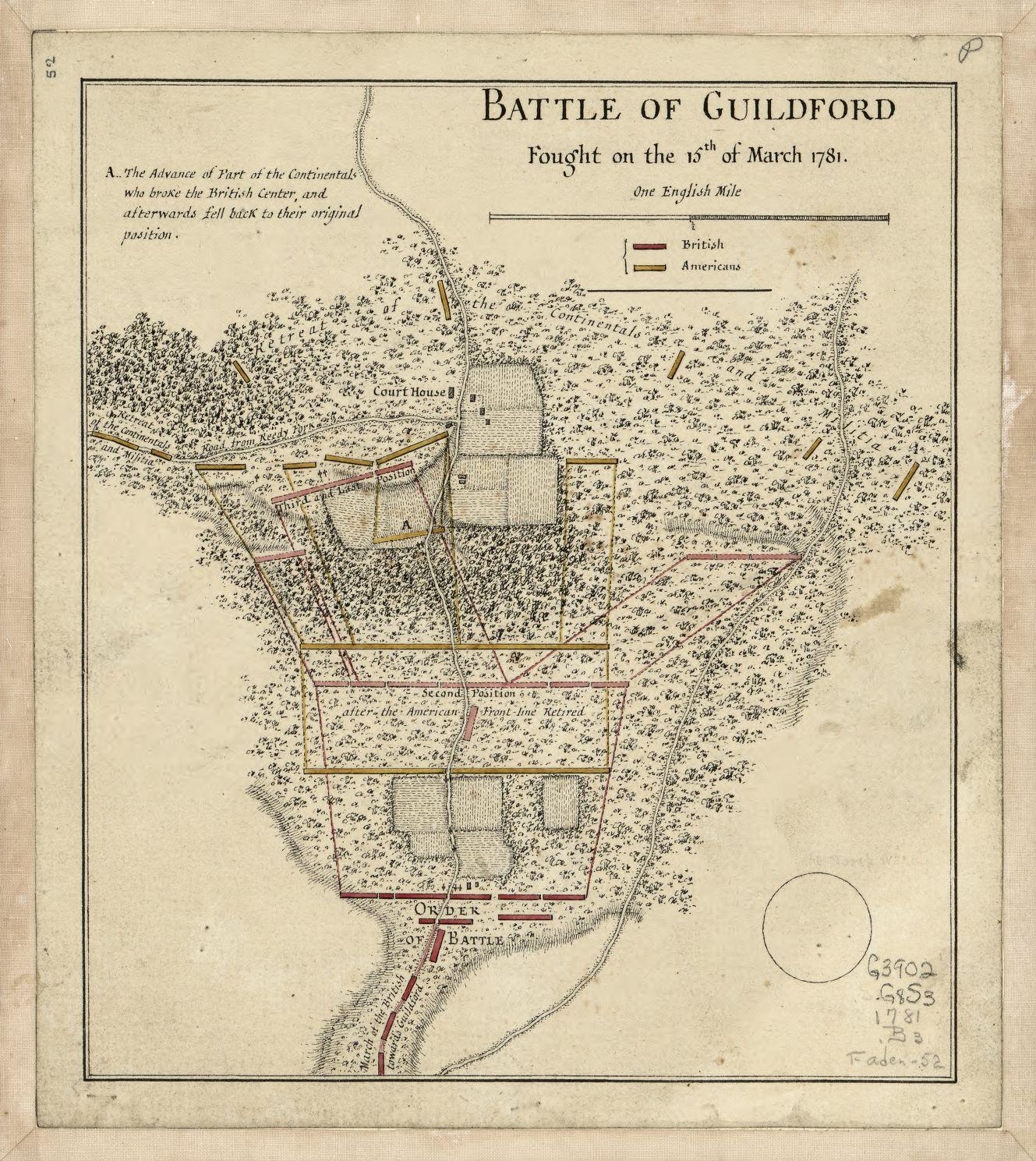 The battle began with a twenty-minute artillery barrage from American six-pounders against the forming British troops.  The British artillery answered with three six-pounders, though losses on both sides were minimal.  The British advanced towards Greene’s first line in two (later three) columns.  They were composed of both British, Loyalist, and Hessian formations.  When the British came within 140 yards of the North Carolina infantry, the Americans began to fire from behind a rail fence.  However, few militiamen got off more than two shots, and most simply threw their guns down and ran.  Those that did fire rarely hit their mark at the extended range.  Greene reported to Samuel Huntington “[we] did all [we] could to induce the men to stand their ground, but neither the advantages of the position nor any other consideration could induce them to stay.”5  As the British advanced, the Virginians in the second line delivered several effective volleys upon the enemy.  Their success was short-lived, and the second line fell back before the weight of Cornwallis’s army and numerous units regrouped with Continental regulars on the third line and in the flanks.  A hotly contested battle immediately followed, and Greene recalled that the fighting was both “long and severe.”6

As the British approached the third line, their ranks were noticeably depleted.  The first two lines of militia and the irregular actions on both flanks had inflicted numerous casualties as well as diverted large detachments of British troops.  The third line contained one brigade of regulars from Virginia and another brigade from Maryland.  The British 2nd Battalion of Guards turned the American left flank as the 2nd Maryland Regiment prematurely broke due to poor training and confusing orders.  The Guards were vigorously counterattacked by American dragoons under Lieutenant Colonel William Washington, but Cornwallis’s artillery prevented the destruction of his Guards when they fired grapeshot into the melee.  The British guns killed many of their own men, but the counterattack was checked.7  Soon after, the remaining regiments of the third line began a general retreat north, abandoning their artillery as they marched.

In three hours, Cornwallis’s army took possession of the field, but it was a Pyrrhic victory.  Official reports stated that the British lost 93 killed, 413 wounded, and 26 missing.8  Many irreplaceable officers also lay dead on the field.  Greene’s Southern Army had lost a “very trifling” 300 killed, wounded, and missing.9  Cornwallis could not afford the casualties his army sustained and withdrew to Wilmington.  By doing so, Cornwallis ceded control of the countryside to the Continentals.   In the coming months, isolated British garrisons and Loyalist militias were eradicated by Greene’s partisans and regulars.  By July 1781 the British only held the coasts of the Carolinas and Georgia.  Cornwallis soon abandoned any hope of a successful campaign in the southern states.  Instead, he began to focus on invading Virginia, which was viewed as a hotbed of rebel activity and the future seat of the war once substantial military aid began arriving from France.10

Doughty, Robert A., and Ira D. Gruber. Warfare in the Western World, Volume I. Lexington: D.C. Heath and Company, 1996.

Millet, Allan R., and Peter Maslowski. For the Common Defense: A Military History of the United States of America. New York: The Free Press, 1994.