The Battle of Guilford Courthouse was a direct result of the Continental victory at the Cowpens and led to Corwallis' march to Yorktown.

A pasturing area at the time of the battle, this Revolutionary War site commemorates the place where Daniel Morgan and his army turned the flanks of Banastre Tarleton's British army. 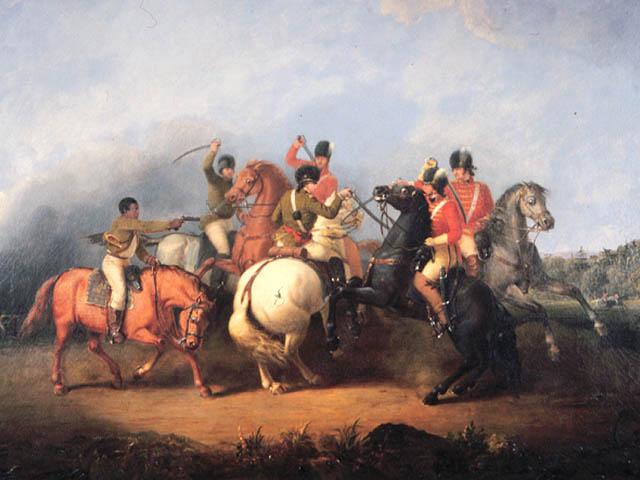 The Battle of Cowpens was fought on January 17, 1781, near Thicketty Creek, South Carolina, on a 500 square yard grazing pasture. It began shortly after dawn on a bitterly cold morning and resulted in a devastating defeat for the British army, ending a brief string of victories for the Crown in the southern colonies. A turning point in the war’s southern campaign, Cowpens produced a massive boost of morale throughout the Continental Army and was a crucial step in securing the South for the American patriots.

By 1779, with little strategic progress in the north, the British strategy shifted to focus on the South and its larger loyalist population. Britain hoped to destabilize the rebellion by supporting southern loyalists and sparking a quasi-civil war. Sir Henry Clinton, commander-in-chief of British forces in North America, recognized that George Washington and the Continental Army would be unable to fight the Crown on both a strong northern and southern front.

The Crown had little success in fighting the rebels in the South until their renewed focus on the region in 1779. Earlier in the war, at Williamsburg, Great Bridge, Cane Break, Moore’s Creek Bridge, Charleston, and Wheeling the British had sustained calamitous defeats. Despite strong support within the civilian population, the British were unable to gain a foothold in Virginia, South Carolina, or Georgia. Momentum shifted, however, on December 29, 1778, as local loyalists and redcoats defeated rebel forces in Savannah, Georgia. The British continued beating back the Continental Army in the South and scored decisive victories at Charleston and Camden in the summer of 1780.

The conflict in the South indeed became a quasi-civil war, with roughly half the population supporting the Crown and half loyal to the rebellion. Congress entrusted Washington to identify a suitable replacement for General Horatio Gates after his disastrous defeat at Camden. On December 3, 1780, 38-year-old Nathanael Greene became the commander of America’s southern forces. Greene’s southern fighting force consisted of a mere 949 Continental Army soldiers and 533 militiamen when he took command. He knew that his small army would be unsuccessful in any direct confrontation with the British, so he violated military convention and split his force in the region. On December 21, 1780, 600 men under the command of Brigadier General Daniel Morgan were dispatched to take position between the Pacolet and Broad rivers in South Carolina. Greene hoped they would find desperately needed supplies and raise support for the rebellion amongst the bitterly divided civilian population.1

The leader of the British southern strategy, Lord Charles Cornwallis, was planning an invasion in North Carolina when he received intelligence of Morgan’s troops moving west. He received incorrect information that Morgan was planning an attack on the British Fort in Ninety Six, South Carolina. Cornwallis ordered 26-year-old Lieutenant Colonel Banastre Tarleton, infamous for his victory at the Battle of Waxhaws, to lead a legion (roughly 600 army regulars) to Fort Ninety Six to confront Morgan and defend the fort.

After arriving at Ninety Six, Tarleton requested additional forces to pursue Morgan’s army to what he correctly surmised was their true destination: the Broad River. On January 16, 1781, Morgan arrived at the river and decided to make a final stand at Cowpens, cornering his force in the bend of the Broad River. By afternoon, Morgan rendezvoused with several hundred additional soldiers, including Andrew Pickens’ militia, and determined that his force of roughly 1,000 men (which he officially reported as 800 to General Greene)2 were capable of fending off Tarleton’s attack. Morgan spent the night before the battle talking to as many continentals and militiamen as he could, delivering powerful speeches and rallying his men for the battle to come. Yet privately Morgan remained pessimistic, reporting to General Greene that his, “force is inadequate to the attempt you have hinted at.”3

Meanwhile, Tarleton marched his exhausted and hungry soldiers through the day and night in hopes of catching the already entrenched patriot force. When they finally made camp near Cowpens, the British were physically and mentally drained, having slept only a few hours each night for the past week. Regulars and many officers were dangerously malnourished, yet Tarleton roused his forces at 2:00 am on January 17, 1781, and ordered them to continue in pursuit of Morgan.

Morgan’s fighting force consisted mainly of members of the militia, most of whom were poorly trained and had a reputation of running in the heat of battle. “Nor do I expect to have more than two-thirds of these to assist me, should I be attacked,” Morgan worried, “for it is impossible to keep them collected.”4 To ensure all of his soldiers remained engaged, he positioned his men between the Pacolet and Broad rivers to make escape from the battle nearly impossible. His soldiers were arranged in three lines: the frontline consisted of 150 sharpshooters under the command of Majors McDowell and Cunningham; the second of 300 militiamen led by Andrew Pickens: and the final line of about 550 Continental regulars directed by Lieutenant Colonel John Eager Howard. Morgan left his force open to flanking from several sides, confident that Tarleton would order a frontal assault.

Just after dawn on January 17, Tarleton took the bait and attacked head on. He ordered 100 dragoons and his artillery to engage the Americans. The militia sharpshooters decimated the dragoons, taking particular aim at officers and killing fifteen men within minutes. The dragoons retreated and Tarleton then ordered his full infantry force to charge the patriot frontlines. Morgan’s sharpshooters also retreated and rejoined the second continental line as the redcoats refocused their attack on the flank of the American force. The British inflicted several casualties on the wavering rebels, and a misunderstood order by John Eager Howard led most of his men to retreat.

Tarleton sensed victory. Morgan ordered Howard’s men, retreating but still in in rank, to turn and fire a volley in unison. The British had broken rank and were in the midst of an unorganized charge when the American volley halted their advance. Morgan then ordered a bayonet charge by Howard’s men just as patriot cavalry, led by Lieutenant Colonel William Washington, flanked Tarleton’s force from one side and Pickens’ reorganized militia attacked from the opposite flank. This “double envelope,” orchestrated masterfully by Morgan led nearly half the redcoats to lay down arms and cease fighting.

Tarleton tried desperately to rally his soldiers. In a final attempt to salvage the battle, he charged Washington’s cavalry with his mounted British legion. During the ensuing skirmish, Washington attacked Tarleton and the two exchanged blows for a brief time. His men now greatly outnumbered and quickly loosing morale, Tarleton finally ordered a retreat after several minutes of engagement but managed to shoot William Washington’s horse out from under him before leaving the battlefield.

The battle had lasted under an hour and was a total victory for the Americans. 110 British soldiers, over 40 of whom were officers, had been killed, another 200 were wounded, and 500 taken prisoner. In sharp contrast, only 12 of Morgan’s men were killed and just 60 had been injured. Nine days after the battle, Morgan reported to his friend William Snickers: “I have given [Tarleton] a devil of a whipping.”5 Morgan's soldiers gave a proper burial to all 122 fallen men and proceeded to Winchester, Virginia, where he delivered his prisoners and reunited with Nathanael Greene. Greene ordered his army north to search for supplies and prepare for the inevitable engagements to follow with British armed forces.6

Tarleton delivered news of his defeat to a shocked Cornwallis who had expected victory at Cowpens. Cornwallis redirected his focus in the South and decided that the British would now make a final push to capture Virginia. The colonial victory at Cowpens reignited the flame of rebellion that had been largely absent in the southern colonies and led many in Britain to question the prospect for a successful end to the war in North America.

Babits, Lawrence. A Devil of a Whipping: The Battle of Cowpens. Chapel Hill, North Carolina: The University of North Carolina Press, 1998.