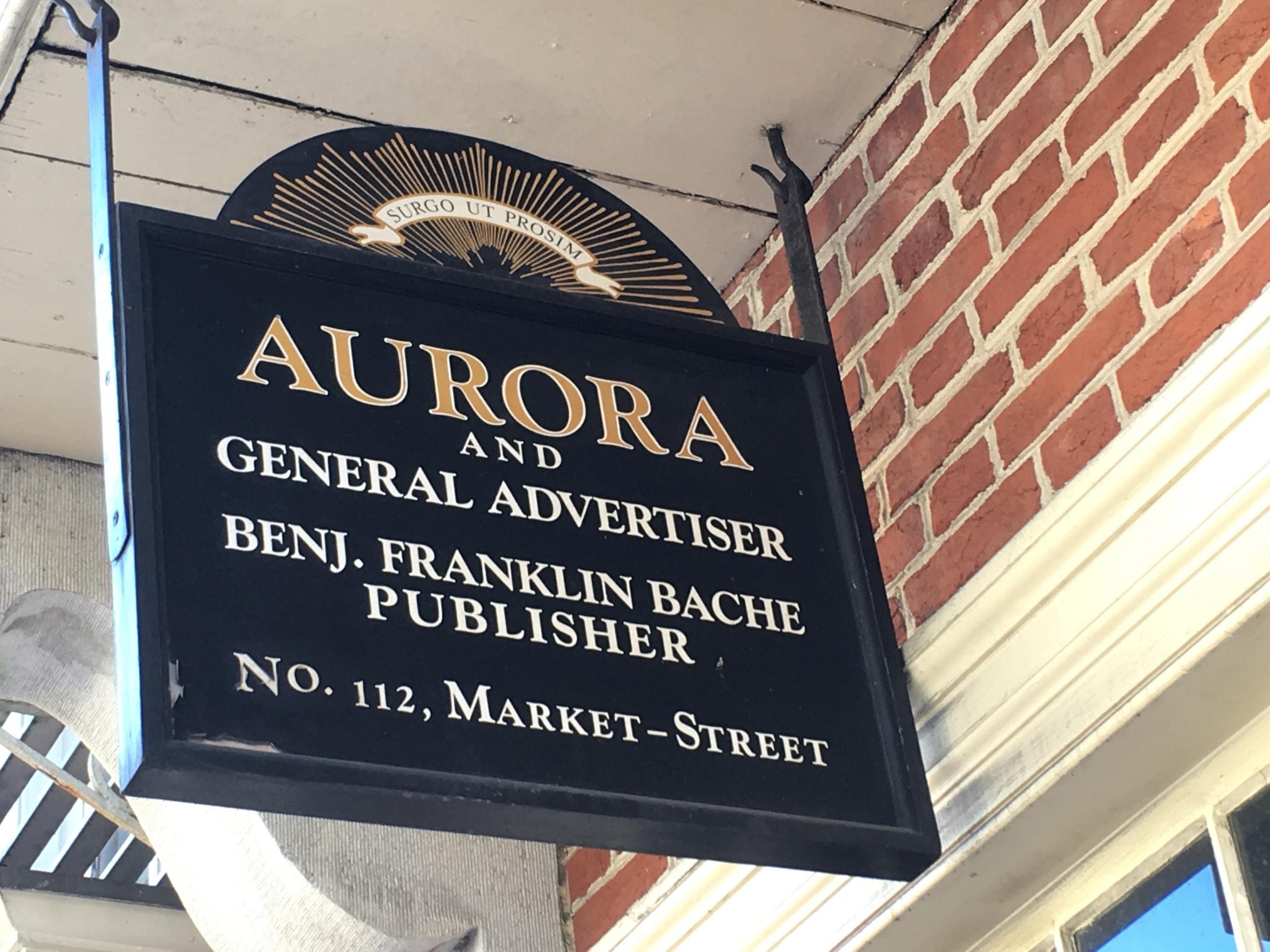 Founded by Benjamin Franklin Bache, the Aurora General Advertiser was published in Philadelphia between 1794 and 1824. Bache, the grandson of Benjamin Franklin, established the Aurora as a Republican newspaper that could counter the many Federalist newspapers in circulation at the end of the eighteenth century. It quickly became the leading Republican paper in the United States. Bache ran the Aurora six days a week from a two-story print shop located a few blocks away from Independence Hall using presses and printing fonts that he had inherited from his grandfather. Despite having a large readership, the Aurora was never a particularly lucrative business for Bache or its subsequent editors.

Bache’s Aurora was fiercely critical of both the Washington and Adams administrations, and Federalists frequently accused Bache of being an agent of the revolutionary French government. While Bache was not funded by France, he did go further than any other Republican editor in using the Aurora as a political tool. For example, in 1795 Bache published the text of the Jay Treaty in the Aurora – an unauthorized reveal that earned him considerable Federalist ire while also drumming up Republican opposition to the treaty's contents.[1] Leading Republicans like James Madison, John Beckley, and James Thomson Callender also contributed anti-Federalist articles for the Aurora during this period, although they often wrote under pseudonyms. Many of these authors blamed President Washington for the Jay Treaty's failings, and when he ultimately ratified the treaty, the Aurora characterized the motion as an act "in opposition to the almost unanimous voice of America!"[2]

The Jay Treaty marked the beginning of a long crusade to discredit Washington in the Aurora. To Bache and his contributors, Washington's support of the Jay Treaty was a sign that he was betraying the values of the Revolution, and so publications like the Aurora had to curb his influence. As one author explained, Washington’s failures as president demanded that the Aurora "enter into an exposition of [Washington’s] public character."[3] To do so, Bache printed a series of letters that Washington had supposedly written during the Revolution that revealed his doubts about both the legitimacy of the American cause and the Continental Army's chance of success against the British.[4] Unbeknownst to Bache, these letters were Loyalist forgeries, but that did not prevent him and his contributors from portraying Washington as an indecisive and feckless leader. In addition, Bache also published articles that questioned Washington's intellect and accused him of harboring monarchical tendencies. A writer under the name "A Calm Observer" even went so far as to accuse Washington of overdrawing his government salary, a crime that they believed warranted impeachment.[5]

When news broke out that Washington had decided to step down from the presidency in 1796, Bache responded by penning an article claiming that "if ever a nation was debauched by a man, the American nation has been debauched by WASHINGTON."[6] Washington responded by using his widely-publicized Farewell Address to criticize individuals and organizations that were "sharpened by the spirit of revenge natural to party dissension."[7] Washington was more explicit about his disgust with Bache's newspaper in private, complaining in a letter to one of his former military staff that “if you read the Aurora of [Philadelphia]…you cannot but have perceived with what malignant industry and persevering falsehoods I am assailed, in order to weaken if not to destroy the confidence of the public.”[8]

Washington's resignation from public life did not silence the Aurora's attacks on his character. Shortly after his retirement, the Aurora advertised the publication of three anti-Washington pamphlets, one authored by Thomas Paine. Paine's Letter to George Washington followed in the tradition of many Aurora articles, labelling Washington a fraud who had duped the American public into handing the reins of government to a quasi-monarchist.[9]

The Aurora remained equally active after John Adams assumed office in 1797 and it quickly became entangled in the controversy surrounding the Alien and Sedition Acts that the Federalist Congress passed a year later. Designed to limit the influence of anti-Federalist ideas and movements, the acts gave the federal government the power to deport immigrants and silence speech that was considered dangerous to American national security. During this time, Bache was barred from attending meetings of the House of Representatives and Federalist sympathizers physically assaulted him in Philadelphia. Federalist politicians even discussed using the Sedition Act to shut down certain Republican newspapers. Indeed, Bache was eventually arrested and charged with libel.

Despite the immense local and legal challenges that he faced, Bache refused to cease printing the Aurora. He even maintained production as a yellow fever epidemic ravaged Philadelphia in the summer of 1798. He died from the disease on September 10, 1798, one month before his scheduled court date. Bache’s assistant William Duane then assumed the position as the Aurora’s editor, guiding it through renewed threats from the Adams administration. Federalists eventually succeeded in charging Duane with sedition, but his case lingered in court, and was eventually dropped following Thomas Jefferson’s election to the presidency in 1800.