Washington dealt with the Asgill Affair while stationed at Newburgh, New York. While at Newburgh in 1783, discontent among his men also threatened his status and reputation.

The Continental Congress ultimately accepted responsibility for the administration of prisoners of war, but gave broad authority on the matter to the Commander-in-Chief of the Continental Army, General George Washington. 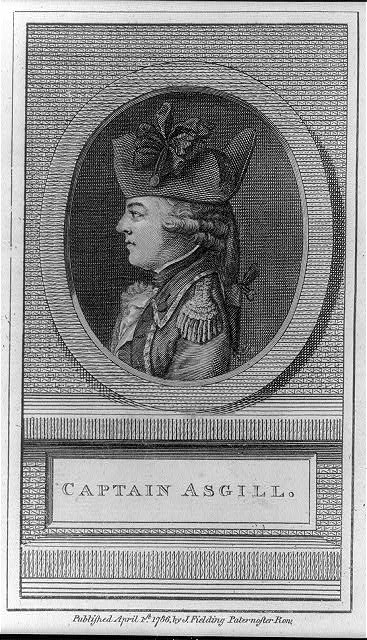 In April 1782, the Board of Associated Loyalists in Monmouth, New Jersey executed the Continental Army Captain Jack Huddy in retaliation for the death of a Loyalist soldier. General George Washington responded by ordering the hanging of the British Captain Charles Asgill. After months of deliberation, however, Congress and Washington determined that Asgill should be released. Several years later, Washington was disturbed to learn that Asgill was spreading rumors that he was treated inhumanely as an American prisoner. The affair represented one of the most serious challenges to Washington's impeccable reputation during the American Revolutionary War.

Background
The Board of Associated Loyalists responded with anger at the murder of their comrade Phillip White by colonial American soldiers on March 30, 1782. The group believed that his death could only be rectified by an act of equal barbarism. The loyalists deceived General Henry Clinton, the Commander in Chief of the British forces, into granting them the possession of Jack Huddy, an imprisoned American captain, for what they claimed would be a prisoner exchange. Instead, they hanged Jack Huddy on April 12, 1782, pinning a placard to his chest with the inscription: "UP GOES HUDDY FOR PHILLIP WHITE."1

On April 14, 1782, General Washington received a letter from the citizens of Monmouth, New Jersey describing the "horrid and almost unparalleled murder" of Huddy.2 The letter implied that if Washington did not act, the citizens of Monmouth would seek revenge on their own.3 Washington, who was stationed at Newburgh, New York, convened a meeting of his superior officers at West Point. The officers unanimously agreed that an officer of equal rank had to be hanged in retribution for Huddy's death.4

In a letter written on May 3, 1783, Washington ordered General Moses Hazen, the commander of the prisoner camp at Lancaster, Pennsylvania to select a British captain or lieutenant to be hanged. He specified the selection of a captain imprisoned without condition, in other words, one who was not protected against retaliation by specific agreement with Britain. Discovering that a prisoner fitting this description did not exist at Lancaster, Washington wrote back on May 18 directing Hazen to select a conditional captain, who was protected by Article XIV of the Yorktown Capitulation which prevented violation of other articles "on pretence of reprisals."5 With the new order in hand, Hazen left the decision up to chance. Captain Charles Asgill, a nineteen-year-old heir to a sizeable fortune in England was selected by fate: he and the other twelve captains drew papers from a hat, and his read "unfortunate."6

Concerning the Fate of Asgill
Captain Asgill was sent to Chatham, New Jersey under the watch of Elias Dayton. Asgill was to be executed on the New Jersey state line because of the site's proximity to the murder of Huddy.7 Despite General Washington's anger over Huddy's death, he decided to spare Asgill's life. In early June 1782, he shared his feelings with Dayton. Washington wrote: "I most devoutly Wish his Life may be saved; this happy event may be attained; but it must be effected by the British Commander in Chief. . . . In the Mean Time while this is doing, I must beg that you will be pleased to treat Capt Asgill with every tender Attention and politeness."8

Washington worried about how Asgill's execution would be interpreted. As a result, he tasked Congress with the responsibility to determine Asgill's fate. As Washington explained in a letter to Congress: "It is a great national concern, upon which an individual ought not to decide."9

In Britain, Asgill's mother, Lady Theresa Pratviel Asgill, began an intense letter writing campaign on behalf of her son. Her outreach included contacting the French foreign minister, the Count de Vergennes.10 Vergennes responded by writing to Washington. In October 1782, Washington described the contents of the French minister's correspondence to Congress: "They contain a very pathetic and affectionate Interposition in Favor of the Life of Capt Asgill. I lose no Time to forwardg... being persuaded that Congress will not hesitate to give an early and decisive Determition respecting the future Treatment of that unfortunate Young Officer."11

Lady Asgill's campaign played a considerable role in Congress's ultimate decision to free her son. Vergennes' letter suggested that releasing Asgill would please the French King Louis XVI, which in turn appealed to both Washington and 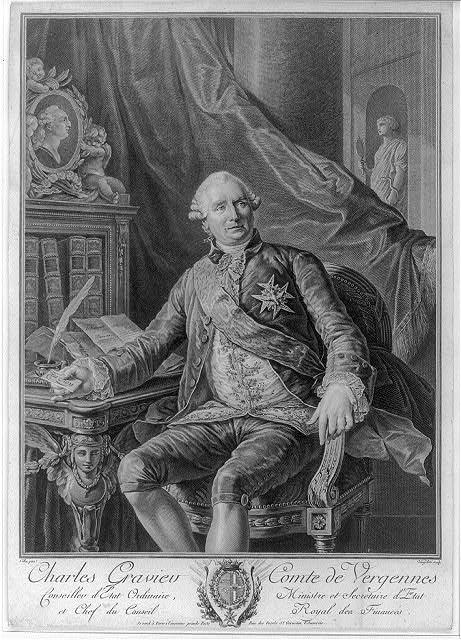 Congress. On November 13, 1782, Washington notified Asgill of Congress' decision to set him free. Washington conveyed his "singular pleasure" in the letter while defending his actions as being a requisite part of his "sense of duty" to prevent future acts of barbarism.12 Captain Asgill received Washington's letter and returned to England, much to the relief of his family.

A Public Quarrel
The Asgill Affair, however, did not end with Washington setting the young captain free. In May 1786, James Tilghman—the father of Colonel Tench Tilghman, Washington's aide-de-camp from the beginning to the conclusion of the Revolutionary War—informed the general of rumors about indignities that Asgill suffered while in the American prison. James Tilghman shared a letter with Washington that he received from a friend in London describing the rumors. Tilghman's friend wrote: "He [Asgill] alledges that a Gibbet was erected before his prison Window . . . and many other insults all of which he believes were countenanced by General Washington."13

Asgill's assertions threatened to stain Washington's reputation. Washington, therefore, responded to Tilghman with an impassioned defense of his actions. He emphasized the leniency that Asgill was provided, including the ability to ride his horse for miles "for the benefit of his health, and recreation of his mind." In Washington's opinion, his treatment of Asgill deserved gratitude: "The treatment he had met with, in my conception merited an acknowledgment. None, however, was offered, and I never sought for the cause."14 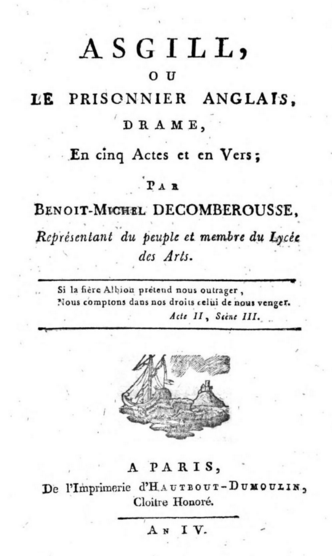 In 1785, the French artist and writer Jean Luois Le Barbier completed a play entitled, Asgill, Drame, en Cinq Actes, en Prose (Asgill, Drama in Five Acts and in Prose), and sent it to Washington. Le Barbier wrote: "I hope Sir, you will not disapprove of my zeal, in publishing your sublime virtues in my performance."15 In the play, Asgill is the hero, although Washington proves forgiving in the end.

To defend his actions, Washington published his official papers on the affair in the New Haven Gazette and the Columbian Magazine in January 1787. In 1859, the papers were published posthumously in book form by the Holland Club as The Conduct of General Washington Respecting Captain Asgill.16