Born in Suffolk, England in 1741, Arthur Young was one of the first experts to publish widely on English farming practices and encourage experimentation in agriculture. Young attempted a few other occupations before taking up farming in 1763. He continued to farm until 1794 when he was appointed to the Board of Agriculture in the position of secretary.1

Young's writings on agricultural topics included Rural Economy; or, Essays on the Practical Parts of Husbandry, first published in 1770, and the periodical Annals of Agriculture and other Useful Arts, published from 1784-1815. In addition, Young also authored several travel books. 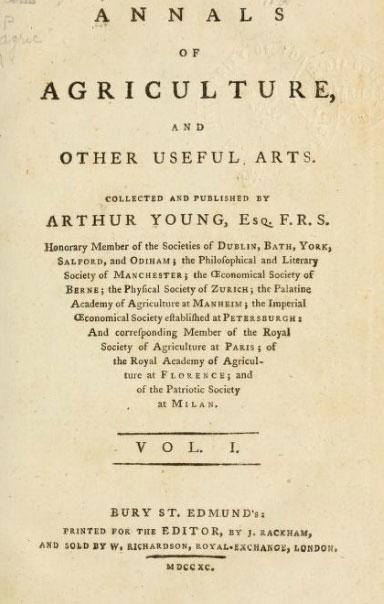 Young had many correspondents on agricultural topics in England, France, and the United States, including George Washington. In his first letter to Washington, Young wrote, "the spectacle of a great commander retiring in the manner you have done from the head of a victorious army to the amusements of agriculture, calls all the feelings of my bosom into play & gives me the strongest inclination, I fear an impotent one, to endeavour in the smallest degree to contribute to the success of so laudable a pleasure." Young explained that he was forwarding the first four volumes of the Annals of Agriculture to Washington as a gift and that he would continue to send the rest of the volumes as they were published.2

Young made good on his promise to send Washington copies of Annals of Agriculture. Washington’s library contained thirty-one volumes of the periodical ranging from 1784 to 1798. The first volume contains the inscription: "To General Washington In Testimony of the Veneration I feel for so great & good a character."3 Washington sent a second set of the periodical to the Philadelphia Society for Promoting Agriculture, an organization that included Washington within its membership.

Young wrote many of the articles in the Annals himself. He encouraged readers to submit their experiences, but the circulation of the periodical was never very large.4 However, it was a labor of love and exhibited his belief in the importance of agriculture and the benefits of pursuing improvements.

The correspondence between Young and Washington reflected the topics covered in the Annals of Agriculture. They shared recommendations on types of seeds, plant yields, tools, and livestock. Washington frequently requested items for Young to ship to him.5 Young submitted a questionnaire to Washington to find out about all aspects of agriculture in the nascent United States of America. Young's influence on Washington is evident in Washington's last message to Congress as President when he argued in favor of the establishment of a national board of agriculture.6 On January 7, 1786, Young wrote directly to Washington, offering to procure workers, materials, and farm animals as needed. The correspondence with Young soon expanded to include other prominent figures in English agricultural circles, including Dr. James Anderson and Sir John Sinclair. In 1797, Washington was even made an honorary member of the English Board of Agriculture.

Young made frequent entreaties to Washington to allow him to print all or part of his letters in the Annals of Agriculture. Washington demurred repeatedly and in one instance stated, "I wish most devoutly to glide silently and unnoticed through the remainder of my life."7 Young finally accepted Washington's decision – at least during his lifetime. After Washington's death, Young published Letters from His Excellency General Washington, to Arthur Young, Esq., F.R.S., in 1801.

Annals of Agriculture and Other Useful Arts, Vol. 1