Perhaps Anthony Wayne's most famous battlefield victory during the American War of Independence, the Battle of Stony Point highlighted just how far the Continental Army had come in therms of tactical proficiency.

Throughout his two terms as president, George Washington sought to strike a balance between white Americans' desire for western land settlement, and the rights of Native Americans. 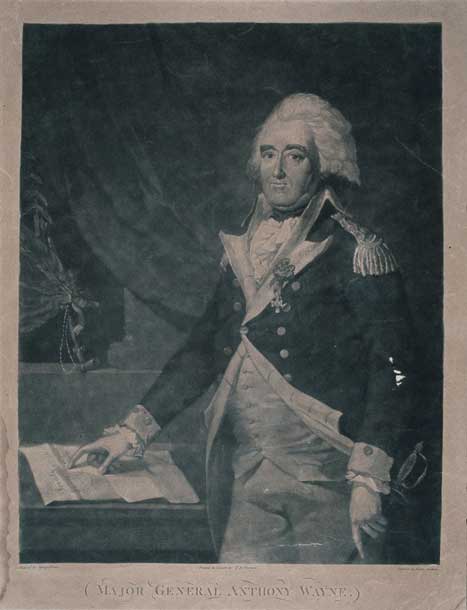 Anthony Wayne was a notable military officer who served in both the War of the American Revolution and in campaigns during George Washington’s Presidential administration. Wayne was famous for his military ardor and his aggressive leadership in combat, earning the sobriquet “Mad Anthony,” but he was also noteworthy for his careful planning prior to going on campaign. During the Revolution, Wayne played an important role in the 1777 Philadelphia Campaign, the Battle of Monmouth, and the Southern Campaigns. His most important military contribution to his new nation, however, was his campaign against American Indians in the Northwest Territory in the 1790s. His victory at the Battle of Fallen Timbers and the resulting Treaty of Greenville fulfilled one of the Washington Administration’s primary policy objectives by ending American Indian resistance to white settlement in what is now Ohio.

Wayne was born at his family home in Chester County, Pennsylvania on January 1, 1745. He attended the Philadelphia Academy and became a surveyor, eventually working with Benjamin Franklin and others in land speculation in Nova Scotia. He married and had two children. As tensions with Britain mounted in the Colonies, Wayne joined the Pennsylvania legislature and his local Committee of Public Safety, and by January of 1776 he had been commissioned as a colonel in the Pennsylvania Line of the Continental Army.

Wayne’s first mission was to reinforce the Continental Army’s Canadian expedition. His combat service began at the American defeat at the Battle of Trois-Rivières in June of 1776. His men joined in the retreat back to New York and Wayne spent the following winter in command of Fort Ticonderoga. In February 1777 he was promoted to brigadier general.

When spring arrived, Wayne and his command returned southward to join Washington’s command as it maneuvered to shield Pennsylvania from General Sir William Howe’s British forces. American intelligence failures and British maneuvers spelled defeat for the Americans at the Battle of Brandywine on September 11, 1777, but staunch defensive fighting by Wayne’s division against a Hessian force twice its size for two hours kept the defeat from being even worse. A little over a week later, a surprise nighttime attack on Wayne’s sleeping rear-guard at Paoli Tavern near his home estate led to dozens of American casualties and Wayne barely escaping capture. The lopsided casualties led many Patriots to label the attack a massacre, but many historians now argue that the Americans exaggerated the incident for propaganda purposes. Wayne was cleared of any wrongdoing by a military court of inquiry, but it was still a humiliating defeat.

The Continentals now focused on ousting the British from Philadelphia, resulting in the Battle of Germantown on October 4, 1777. Washington’s elaborate battle plan called for Wayne’s command to lead the offensive against the center of the British lines. Confusion set in as the fighting began in thick morning fog inside the town. The Pennsylvania Line came under fire from other American forces and Wayne’s men retreated in some disorder, exposing the flanks of other American units. Defeated once again, the Continental Army retreated to its infamous winter quarters at Valley Forge.

Wayne next saw significant military action in the Battle of Monmouth on June 28, 1778. The Continentals attempted to attack the British as they marched from Philadelphia to the coast of New Jersey. Wayne’s command, serving under Major General Charles Lee, made first contact with the enemy. The cautious Lee refused to supply Wayne with reinforcements and Wayne had to pull his men back from the full force of the British onslaught and fight a desperate defensive battle.

A year later, as the Northern Theater settled into stalemate, Wayne had his revenge for Paoli when his meticulously-planned night assault on a 600-man British garrison at Stony Point in New York inflicted over 100 British casualties and netted over 400 prisoners. Wayne was briefly stunned by a musket ball to the head during the battle, but he was able to provide the Americans with a much-needed tactical victory.

Following two years of relative inactivity marred by a few outbreaks of mutiny over pay, Washington transferred Wayne’s command to the Southern Theater in the summer of 1781, where Mad Anthony barely escaped a trap by General Sir Charles Cornwallis at the Battle of Green Spring Farm. Discovering he was vastly outnumbered, Wayne ordered a bayonet charge followed by a rapid retreat. After the American victory at Yorktown, Wayne and his men moved to Georgia, where Wayne’s men defeated the Creek Indians allied to the British in June of 1782, secured Savannah after the British evacuation that same summer, and were the first Americans to enter Charleston, South Carolina, following the British evacuation in December.

Following the war, Wayne was belatedly promoted to major general. He became a planter in Georgia and was elected to Congress from his new home. His attempts at farming in Georgia, however, left him mired in debt and he had to resign his Congressional seat because of voting irregularities. But the new nation still had use for his military services.

As the newly-independent United States looked to consolidate its borders and secure room for expansion in the Northwest Territory, the local American Indians had resisted fiercely, inflicting costly defeats on the poorly-trained and equipped military forces sent to pacify the region. The Washington Administration called Wayne out of retirement in the spring of 1792 to command the newly-formed Legion of the United States. Wayne was now the senior commander in the United States Army.

Wayne’s instructions were to build the Legion while diplomats attempted to negotiate a peaceful settlement with the chieftains. The negotiations dragged on for over a year while Wayne carefully trained his men and planned his campaign. When the talks finally broke down in the fall of 1793, delays in mobilizing militia support and an epidemic limited his advance, and he constructed a fort and further prepared the Legion. The following summer, this fort withstood a combined attack by American Indians and Canadian settlers and Wayne cautiously went onto the offensive. On August 20, 1794, Wayne’s well-drilled Legion defeated a combined force of American Indians and Canadians in a storm-ravaged section of forest in what is now Ohio. Following the Battle of Fallen Timbers, his adversaries fled to the shelter of a nearby British fort, but the British, fearing Wayne’s overwhelming numbers, refused to shelter their erstwhile allies.

Wayne’s victorious campaign accomplished what all previous military and diplomatic efforts had failed to do; in the Treaty of Greenville the Natives surrendered of all claims to Ohio. The victory helped convince the British to abandon their forts in the area as well. Wayne would not live long to enjoy the adulation of his new nation, however. He died from complications of gout on December 15, 1796 in northern Pennsylvania as he returned to the Northwest from Philadelphia.

Washington seems to have had conflicting views about Wayne as a leader. While President, Washington wrote that Wayne was “More active & enterprizing than judicious & cautious. No œconomist it is feared.” He further described him as “Open to flattery—vain—easily imposed upon—and liable to be drawn into scrapes” and “Too indulgent … to his Officers & men.”1 Still, Washington’s choice of Wayne to head the new Legion of the United States showed the President’s faith in his former subordinate’s ability to balance careful planning and the necessity of diplomacy with his “Mad” temperament in battle.

Kohn, Richard H. Eagle and Sword: The Federalists and the Creation of the Military Establishment in America, 1783-1802. New York: The Free Press, 1975.