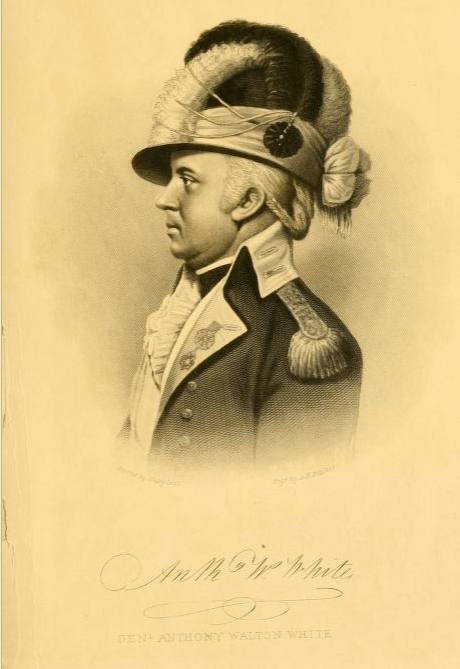 Born near New Brunswick, New Jersey on July 7, 1750, Anthony Walton White was the fourth child and only son of the well-connected Anthony and Elizabeth (née Morris) White.1 He was privately educated by his father and was well on his way of following in his father’s footsteps when the War for Independence began.2

Siding with the opposition to the royal government, Anthony Walton White was recommended to General George Washington in the first weeks of his command of the Continental Army by George Clinton, a delegate to the Continental Congress from New York.3 Washington tried White as an aide-de-camp for several weeks, but courteously turned him down in favor of Robert Hanson Harrison in October of 1775.4 In need of an assistant who could think and write on his behalf, the Commander-in-Chief winced at the thought “of Mr White’s expectation of coming into my [staff], if an opening happens. I can derive no earthly assistance from such a Man.”5

Anthony Walton White returned to his home state and secured an appointment as the Lieutenant Colonel for the 3rd New Jersey Regiment, on February 6, 1776.6 Elements of the unit marched towards Canada in the spring, but were diverted with the mission of arresting Sir John Johnson in upstate New York.7 Despite orders to the contrary, Lieutenant Colonel White led in the plundering of Sir John’s home, Johnson Hall. The ensuing court-martial resulted in his acquittal, but White further aggravated matters by fiercely assaulting Lieutenant Colonel Richard Varick, who he believed to be one of his anonymous accusers.8

Thereafter, White was transferred to the newly-formed 4th Regiment of Light Dragoons, as the unit’s executive officer on February 15, 1777.9 White served in this capacity through the Philadelphia campaign in 1777 and the Battle of Monmouth in 1778 until his transfer to command the 1st Light Dragoons on December 19, 1779 as Lieutenant Colonel, Commandant.10 The following spring, Colonel White joined his unit in South Carolina during the Siege of Charleston and suffered a devastating defeat at Lenud’s Ferry on the Ashley River on May 6, 1780.11 After replenishing his regiment, White was part of the Marquis de Lafayette’s light corps in Virginia in 1781 and, after the Battle of Yorktown, returned with his unit to South Carolina and Georgia. All through the course of the conflict, Anthony Walton White’s record is peppered with controversy, reprimands, and courts-martial.12

With the peace, Anthony Walton White married Margaret Ellis, a South Carolina heiress, in 1783 and pursued business ventures for the next several years, first in Georgia and then in New York.13 He returned to his native New Brunswick in 1793 with his wealth significantly reduced by bad investments and hefty payments due to loans as a result of his personally providing for his regiment in the last years of the War for Independence.14 Through political connections, White was employed as the Adjutant General for the State of New Jersey on June 5, 1793 and commanded an element of cavalry during the Whiskey Rebellion, earning the notorious sobriquet of “Blackbeard” for his cruelty.15

In preparation for the Quasi-War with France in 1798, Anthony Walton White was recommended for a general officers’ rank in the Provisional Army of the United States of America. George Washington antithetically reacted to this nomination by declaring, “Of all the characters in the Revolutionary Army, I believe one more obnoxious to the Officers who composed it could not have been hit upon for a Gen[era]l Officer than White - especially among those to the Southward where he was best known, & celebrated for nothing but frivolity... empty shew &... for being a notorious L[ia]r.”16 Despite the protest of the Commander-in-Chief, “strong and influential characters,” secured White’s appointment as a Brigadier General in the Provisional Army.17 The crisis passed before a military force was organized and General White returned to his wife and daughter in New Brunswick, where he remained until his death on February 10, 1803.18