Annis Boudinot Stockton first rose to fame as the wife of Richard Stockton, a signer of the Declaration of Independence, but was later remembered for her prolific and patriotic poetry. She wrote poems to then Continental Army Commander General George Washington regarding his bravery and leadership, and through this became a frequent correspondent to Washington as he ascended to the presidency. Her voice has been likened to that of Anne Bradstreet and Emily Dickinson by literary experts and her poems highlight the experiences of the time when the newly formed United States was fighting for its existence. 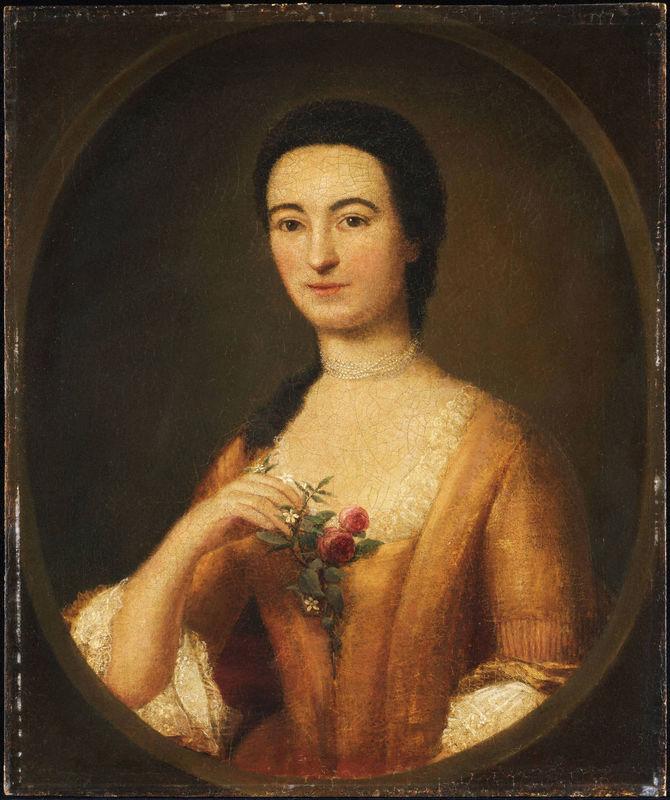 Annis Boudinot was born in 1736 to Elias Boudinot and Catherine Williams in Pennsylvania. Elias was a businessman who started a copper company in nearby New Brunswick, New Jersey, in the early 1750s, moving Annis and the rest of his family there from Philadelphia. Around 1757, he became postmaster of Princeton, New Jersey, and with this position came social opportunities for the young Annis, who found herself in an elite Princeton social circle.

Although many details of her early life remain unclear, Annis most likely led a life full of learning and not much physical labor. Where most women at the time could maybe read the Bible and possibly write their names, Annis was writing beautiful poetry at the age of sixteen. Her first dateable poem, written in 1753, was entitled, “An invitation ode to a young Lady in New York from her friend in the Country,” in which Annis addresses a friend in the city from her new home in New Brunswick.1

At the age of twenty-one, Annis married lawyer Richard Stockton in either late 1757 or early 1758.2  She and Richard lived on the Stockton lands opposite from the College of New Jersey (today Princeton University) at an estate that Annis named Morven. Annis continued to produce poetry, drawing inspiration from her gardens and her life experiences as a Princeton socialite. Her poetic voice has been described as one that examines “attitudes and tensions of white Anglo-American culture” of the eighteenth century.3

As the American Revolution dawned, the Stocktons, like so many colonists, found themselves facing a choice. Richard had been given various British government appointments and up until 1776 had been in support of a peaceful solution to the imperial crisis. He realized that there could be no simple solution, however, and publicly denounced the British, which garnered him a place as a delegate to the Second Continental Congress in June 1776. Richard was captured by the British in November 1776 and forced to swear an oath that he would not act against the British again. However, Annis did not have to abide by her husband’s oath and continued to support the revolution through publishing patriotic poetry and raising money for the Continental Army. When Richard Stockton died of cancer on February 28, 1781, Annis wrote a moving eulogy for her husband, expressing her emotions through her poetic voice.

George Washington first learned of Stockton’s poetry through a 1779 letter he received from her brother Elias Boudinot, who sent Washington one of Annis’s poems praising his leadership.  In response to this letter from Elias, Washington wrote with appreciation, “however I may feel inferior to the praize, she must suffer me to admire & preserve it as a mark of her genius tho’ not of my merits.”4 In 1782, Stockton wrote a pastoral highlighting the capture of British military leader Lord General Charles Cornwallis and once again praising Washington.5 This pastoral became famous because it was published in the New Jersey Gazette under the pseudonym “A Lady from New Jersey.”6

The correspondence between Washington and Stockton is littered with mentions of her poetry, the muses that inspired her, and quotes from a flattered Washington. In a letter dated August 28, 1783, Stockton shared her thoughts on Washington’s successes and her admiration for him:

Thus crown’d return to Vernons soft retreat
There with Amanda taste unmixed Joy
May flowers Spontaneous rise beneath your feet
Nor sorrow Ever pour her hard alloy
May nature paint those blissful walks more gay
And rural graces haunt the peaceful grove
May angels gaurd you in your lonely way
And prompt the path to brighter scenes above
And oh if happly in your native shade
One thought of Jersey Enters in your mind
Forget not her: on morvens humble glade
Who feels for you a friendship most refin’d.7

In early September, Washington responded to the poem by thanking Stockton for giving, “so bright a colouring to the Services I have been enabled to render my Country.”8 Later, in February 1784, after having received another poem from Stockton, Washington wrote: “I think the easy, simple, and beautiful strains with which the dialogue is supported, does great justice to your genius.”9

Washington and Stockton clearly shared a relationship of mutual admiration and friendship. She became a friend of the Washington family through her letters to George and hosted several dinners for the Washingtons at Morven. Washington expressed his and Martha’s feelings toward Stockton in the closing of one of his letters: “Be assured we can never forget our friend at Morven.”10 Annis Boudinot Stockton died on February 6, 1801, but her prolific writings and relationships with many of the founders of the United States continue to uphold her legacy.

1. Carla Mulford, ed., Only for the Eye of a Friend: The Poems of Annis Boudinot Stockton (Charlottesville: University of Virginia Press, 1995), 72.

2. It is known that she was definitely referred to as Mrs. Stockton by early 1758, but there is no official record of a marriage certificate or a wedding. Mulford, ed., Only for the Eye of a Friend, 15.

Mulford, Carla, ed. Only for the Eye of a Friend: The Poems of Annis Boudinot Stockton (Charlottesville: University of Virginia Press, 1995).