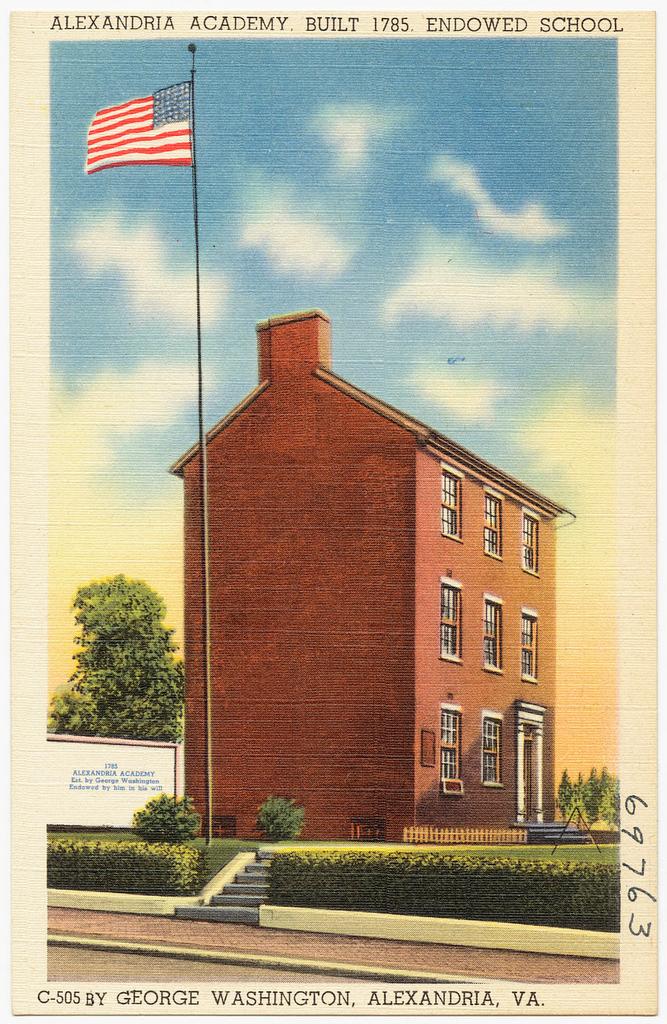 Incorporated by the Virginia Assembly in 1786, the Alexandria Academy, located in George Washington’s home community of Alexandria, Virginia, embodied his commitment to the education of all Americans, including the poor and women. Washington contributed significantly to the Academy during his life and with provisions in his will, as well as advising its Board of Trustees of his vision for the establishment.

The Alexandria Academy building is a three-story brick structure, located to this day on the east side of South Washington Street, between Wolfe and Wilkes Streets. The Alexandria Lodge of Freemasons, led at the time by Robert Adam, laid the cornerstone of the building on September 7, 1785. Thirteen interim trustees (including George Washington) were appointed until annual elections could begin in 1788.

A separate school operated on each of the three floors of the Academy. The first floor held the English School that taught grammar, writing, arithmetic, and physical sciences to paying students. The second floor held the Learned Language School, which taught classical Latin and Greek. The Free School was on the third floor, where similar skills were taught as on the first floor. A forerunner of the public school system, the Free School provided education at no cost to girls, orphans and other poor children.

From the Academy’s founding, Washington took an especially active interest in supporting the mission of the Free School. In a letter to the Trustees of the Alexandria Academy, dated December 17, 1785, Washington laid out his wishes for the institution to educate orphan children and those whose parents could not provide for an education. He also supported the education of girls at the Academy “in a ratio not to exceed one girl for four boys.”1

Washington made an annual commitment to the Academy of 50 pounds for the purpose of education, but consented that the monies could be used for clothing or other needs, if the Trustees felt it was appropriate. His annual contribution to the Academy generally covered the expenses of twenty students.2 He requested that the names and grades of the students whom he funded, so he could follow their progress.3 In 1789, John V. Weylie, just one of the many benefactors of Washington’s generosity, wrote a letter thanking him for providing for his and others’ educations: “[F]or your Generosity to Which I owe for my Learning I Might have remained without any all My life But since You have been so Bountiful to The Poor Inhabitants of this town As to set up a free School for the benefit of the poor Children Whose Parents were not able to Give them a proper Education.”4

Upon Washington’s death in 1799, his last will and testament directed a gift of four thousand dollars, or 20 shares of stock in the Bank of Alexandria, to the Academy. It was one of three educational institutions to receive benefits in Washington’s will, the other two being Liberty Hall Academy (today Washington and Lee University) and a national university (today The George Washington University).

Several notable students attended the Alexandria Academy. In 1785, Washington removed two of the sons of his deceased brother Samuel, George Steptoe Washington and Lawrence Augustine Washington, from Georgetown Academy to attend the Alexandria Academy. In 1803, Dolley Madison, the wife of then Secretary of State James Madison, enrolled her son, Payne Todd, in the Academy. The Confederate general Robert E. Lee also attended the Academy, from 1820 to 1823, and was remembered as an exemplary scholar.

After the War of 1812, the original Free School supported by Washington moved to a Georgetown location, and an association of free African Americans founded a new free school on the third floor of the Alexandria Academy building. In 1830, the Virginia state legislature banned the education of African Americans—freed or enslaved. During the Civil War, following the Union occupation of Alexandria in May 1861, the Academy building again housed a free school for the children of free African Americans, as well as a freedman’s hospital and school.

In 1884, the Alexandria Academy became a part of the Alexandria Public School System and was used as a school and administrative facility for nearly a century. In 1995, the Historic Alexandria Foundation (HAF) purchased the building from the City of Alexandria and raised $1.2 million for an ambitious restoration. In the twenty-first century, the building has continued to be used for education through leases to Alexandria cultural and educational institutions.