Dallas was an early supporter of Democratic-Republican societies, which opposed the establishment of a more centralized federal government. 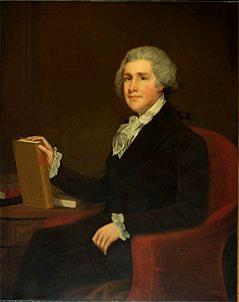 Alexander Dallas was a Pennsylvania lawyer, financier, and politician who served as President James Madison’s secretary of the treasury. While serving in this capacity, Dallas helped to lead a movement within the Democratic-Republican Party against traditional Jeffersonian economic beliefs by championing the establishment of the Second National Bank of the United States.

Alexander Dallas was born in 1759 in Jamaica to English parents. At a young age, he moved to England to receive a formal education at Edinburgh and Westminster, where he studied to become a lawyer. In 1783, Dallas moved to America and gained reputation as a detail-oriented lawyer. He also befriended Benjamin Franklin, who helped to secure Dallas positions at various Philadelphia publications.

While living in Philadelphia, Dallas worked as a court reporter. In 1790, the Supreme Court of the United States began operating out of Philadelphia. During that year, Dallas served as the unofficial post reporter. However, these reports were often poorly written, late, and lacking the necessary information.

In 1801, Dallas moved into the national political theater as a United States District Attorney for the Eastern District of Pennsylvania. He served in this capacity for thirteen years, establishing more political connections within the Republican Party. In particular, Dallas won the attention of President Madison, who nominated Dallas to be his secretary of the treasury on October 5, 1814.

Dallas’s policy as secretary involved raising taxes, issuing bonds, and controlling the circulation of specie throughout the economy. Dallas also inherited an economy in disarray following the War of 1812. In response, Dallas pushed for the establishment of a Second National Bank, an institution previously associated with Alexander Hamilton and the Federalist Party. Dallas expressed his rationale for the bank in a letter to William Jones, at the time secretary of the navy and the future first president of the Second National Bank: “The state of public credit admits of no palliative remedy. There must be established an efficient, productive system of taxation. There must be established a National bank to anticipate, collect, and distribute revenue.”1 Dallas believed establishing a National Bank was crucial not only for saving the economy but ensuring the future success of the American government. Much like Hamilton, Dallas saw the success of the federal government tied to its ability to collect revenue and establish competitive credit.

On March 14, 1816, the House of Representatives passed Dallas’s National Bank plan by a narrow vote of 80 to 71, and on April 10 President Madison signed the bill into law. This marked the crowning achievement of Alexander Dallas’s tenure as secretary of the treasury as one year later he resigned from his leadership role. Following his resignation, Dallas returned to Philadelphia to practice law, but died three months later to what doctors called gout in the stomach.

Dallas’s legacy lives on today in a number of ways. Dallas Country, Alabama, and Dallas Township, Pennsylvania, are both named after him. Dallas’s son, George Mifflin Dallas, served as vice-president under President James K. Polk, and it is thought that Dallas, Texas, is named after him.