1. Washington crossed the Delaware River so that his army could attack an isolated garrison of Hessian troops located at Trenton, New Jersey.

So why were Washington and his bedraggled Continental Army trying to cross an ice-choked Delaware River on a cold winter’s night? It wasn’t just to get to the other side. Washington’s aim was to conduct a surprise attack upon a Hessian garrison of roughly 1,400 soldiers located in and around Trenton, New Jersey. Washington hoped that a quick victory at Trenton would bolster sagging morale in his army and encourage more men to join the ranks of the Continentals come the new year. After several councils of war, General George Washington set the date for the river crossing for Christmas night 1776.

2. Washington’s attack plan included three separate river crossings, but only one made it across.

George Washington’s plan of attack included three different crossings of the Delaware River on Christmas night. Col. Cadwalader was to lead his force of 1,200 Philadelphia militia and 600 Continentals across the river near Burlington, New Jersey. His role was to harass and prevent the British and Hessian units near the town from racing north to support the Hessians at Trenton. Gen. James Ewing’s force of 800 Pennsylvania militia was to cross the river at Trenton and take up defensive positions along the Assunpink River and bridge. Ewing’s soldiers would work to prevent the Hessians from retreating from Trenton. And Washington and his 2,400 soldiers would cross at McConkey’s and Johnson’s ferries, roughly 10 miles north of Trenton and would then march down to Trenton to surprise the garrison at dawn. This was an ambitious plan, one that even well rested and experienced troops would have had difficulty in executing. Both Cadwalader and Ewing’s forces were unable to cross the ice-choked river. And Washington’s main force managed a crossing, but was more than three hours delayed. 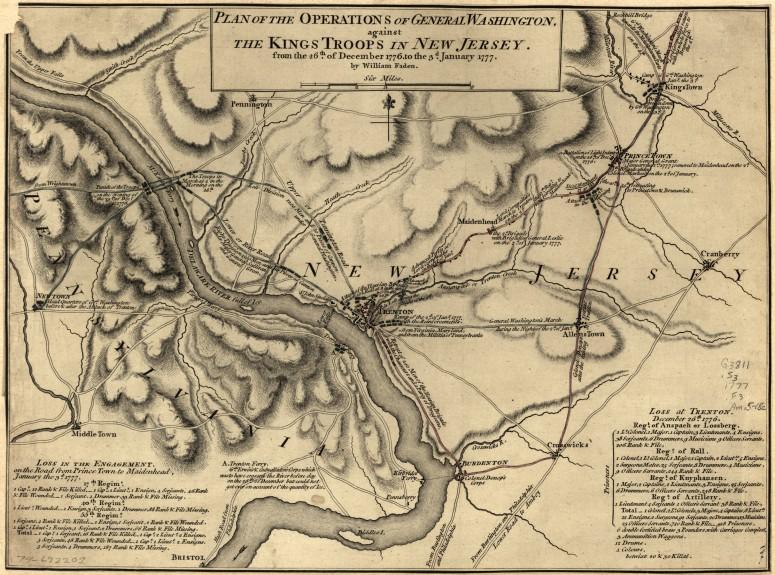 3. Spies and deserters had informed the British and Hessians that Trenton was likely to be attacked.

Lurking within Washington’s headquarters was a British spy who has never been identified. This spy was privy to the early deliberations of Washington’s war council and correctly passed along to British Major General James Grant that Washington’s army was looking to attack north of the river. Grant passed along this information to General Leslie and Col. Von Donop who then passed it along to Col. Johann Rall at Trenton. And while Grant stated that he did not think Washington would attack, he did command Rall to be vigilant. Rall acknowledged receipt of this important intelligence at about the same time that Washington was beginning his crossing. With typical Hessian bravado, Rall dismissed or even welcomed the threat stating “Let them come… Why defenses? We will go at them with the bayonet.”

The day before, Rall had received two American deserters who had crossed the river and told the Hessians that the American army was ready to move. Other loyalists informed the Hessians that an attack was imminent. So why wasn’t Rall more active in opposing the crossing or better prepared to defend the town? History records that a series of false alarms and the growing storm had given the Hessian defenders a sense that no attack was likely this night. How might history have changed if the Hessians responded differently to all this intelligence?

4. Washington’s force used a collection of cargo boats and ferries to transport his men across the Delaware.

Thanks to the foresight of General Washington and the actions of the New Jersey militia, the American forces had brought all available watercraft on the Delaware to the southern bank, thus denying the British the use of these crafts, while making them available for an American recrossing. Much of Washington’s force crossed the river in shallow draft Durham boats – strongly built cargo vessels, most between 40 and 60 feet in length, designed to move iron ore and bulk goods down the river to markets in and around Philadelphia. These stout craft with their high side walls were robust enough to survive the ice-choked Delaware. Heavy artillery pieces and horses were transported on large flat-bottomed ferries and other watercraft more suited to carrying that type of difficult cargo. It shouldn’t be surprising that most of Washington’s soldiers stood during the crossing since the bottoms of Durham boats were neither comfortable nor dry.

5. Experienced watermen from New England and the Philadelphia area ably guided the boats across the challenging river.

One factor in Washington’s favor was the large number of experienced watermen to be found at the crossing site. Col. John Glover’s Marblehead regiment was filled with New Englanders who had extensive experience as seamen. Glover’s men were all quite identifiable with their short blue seaman’s jackets, tarred pants, and woolen caps. Other experienced watermen from the Philadelphia area, many familiar with this exact stretch of river, had also congregated in the area and were able to provide the muscle and skill needed to make the perilous nighttime crossing.

6. The crossing was made worse by the arrival of a strong storm that brought freezing rain, snow, and terrifying winds.

By the time that most of the soldiers had reached the launching point for the boats, the drizzle had turned into a driving rain. And by 11 o’clock that evening, while the boats were crossing the river, a howling nor’easter made the miserable crossing even worse. One soldier recorded that “it blew a perfect hurricane” as snow and sleet lashed Washington’s army. 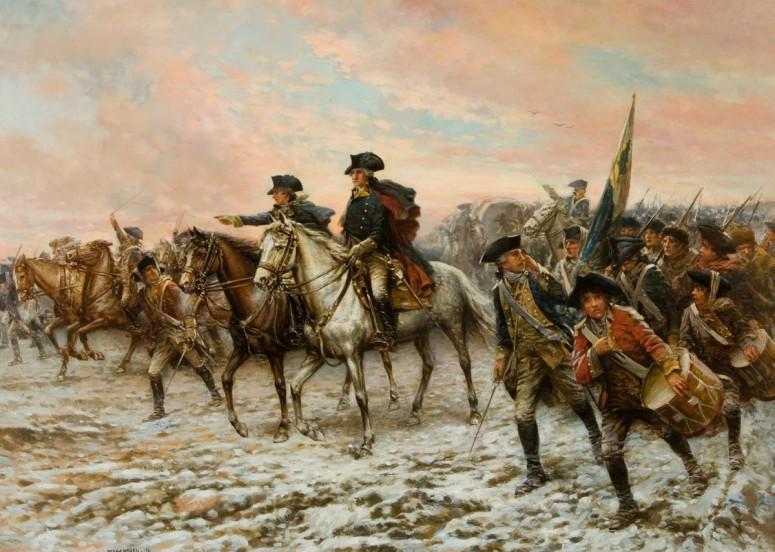 It shouldn’t be all that surprising that Washington’s carefully choreographed attack plan should have fallen so far behind schedule. His men were tired, hungry, and ill-clothed. They had to march many miles through the dark and snow to even reach the river crossing site. From there, they needed to board boats at night, during a frightening nor’easter. Finally, across the river, Washington was dismayed to discover that he was a full three hours behind his schedule. His plan had called for another march of 10 miles to the outskirts of Trenton on roads that were now slick with ice and snow. With every delay Washington’s fears that his army would be caught in the open magnified. What to do? Contemplating his choices Washington was seen brooding on a crate near a fire. Washington later wrote, when remembering this fateful moment, “…As I was certain there was no making a retreat without being discovered and harassed on repassing the River, I determined to push on at all Events.”

8. The Continentals brought a great quantity of artillery across the river.

One would think that crossing an icy river at night was hard enough without also bringing a great contingent of heavy artillery pieces with them. Despite the trouble, Washington and the Continental army wanted the extra firepower that the artillery could produce. Under the overall command of Col. Henry Knox, the Continentals brought 18 cannons over the river – 3-Pounders, 4-Pounders, some 6-Pounders, horses to pull the carriages, and enough ammunition for the coming battle. The 6-Pounders, weighing as much as 1,750 pounds were the most difficult to transport to the far side of the river. But in the end, all the trouble of moving this large artillery train to Trenton proved its worth. Knox would place the bulk of his artillery at the top of the town where its fire commanded the center of Trenton.

9. The Delaware River is less than 300 yards wide at the point where the army crossed.

Despite how the Delaware River is commonly portrayed in works of art, the site where General Washington and his army crossed was rather narrow. Durham boats and flat ferries were used to cross. They were probably fixed to a wire strung across the river. 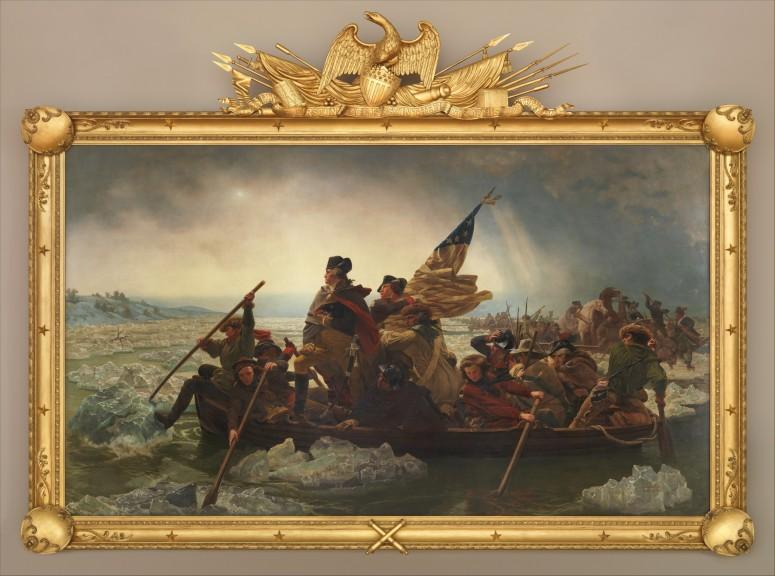 10. One of the most famous American paintings shows Washington and his army crossing the Delaware River.

Painted in 1851 by German artist Emanuel Leutze, Washington Crossing the Delaware became a sensation on both sides of the Atlantic. Painted in Dusseldorf Germany, Washington Crossing the Delaware shows a bold General Washington navigating through the frozen river with his compatriots braving the elements on their way to victory at Trenton. While the painting was in Germany, Leutze hoped that this brave episode in pursuit of American independence and republican rule would stir his fellow countrymen to more liberal reforms. In the fall of 1851, the painting was shipped to the United States where it wowed audiences in New York City and the U.S. Capitol Rotunda in Washington DC. The New York Evening Mirror boldly called it “the grandest, most majestic, and most effective painting ever exhibited in America.”

Leutze went to great lengths to make his portrait accurate, but even his efforts still left many inaccuracies in place. Nevertheless, the 12’ 5” by 21’ 3” (3.8m x 6.5m) painting stirred the patriotic emotions of countless Americans who have seen the painting which now is on display in the American Gallery at the Metropolitan Museum of Art.

Why did Washington cross the Delaware? Learn that and more about the Trenton-Princeton Campaign.

10 Facts about the Battle of Princeton

Washington followed up his victories at Trenton with one more at the Battle of Princeton.