For only one weekend each spring, Mount Vernon is transformed into a Revolutionary War battleground.

You can watch the battles, wander through the encampments, meet the soldiers and civilians, and ask them about life during the Revolutionary War.

Below Sergeant Joe Wagner of the First Virginia Regiment explores some of the basics of Revolutionary War battles.

What are all those soldiers trying to accomplish standing in a field shooting at each other? How do you “win”? 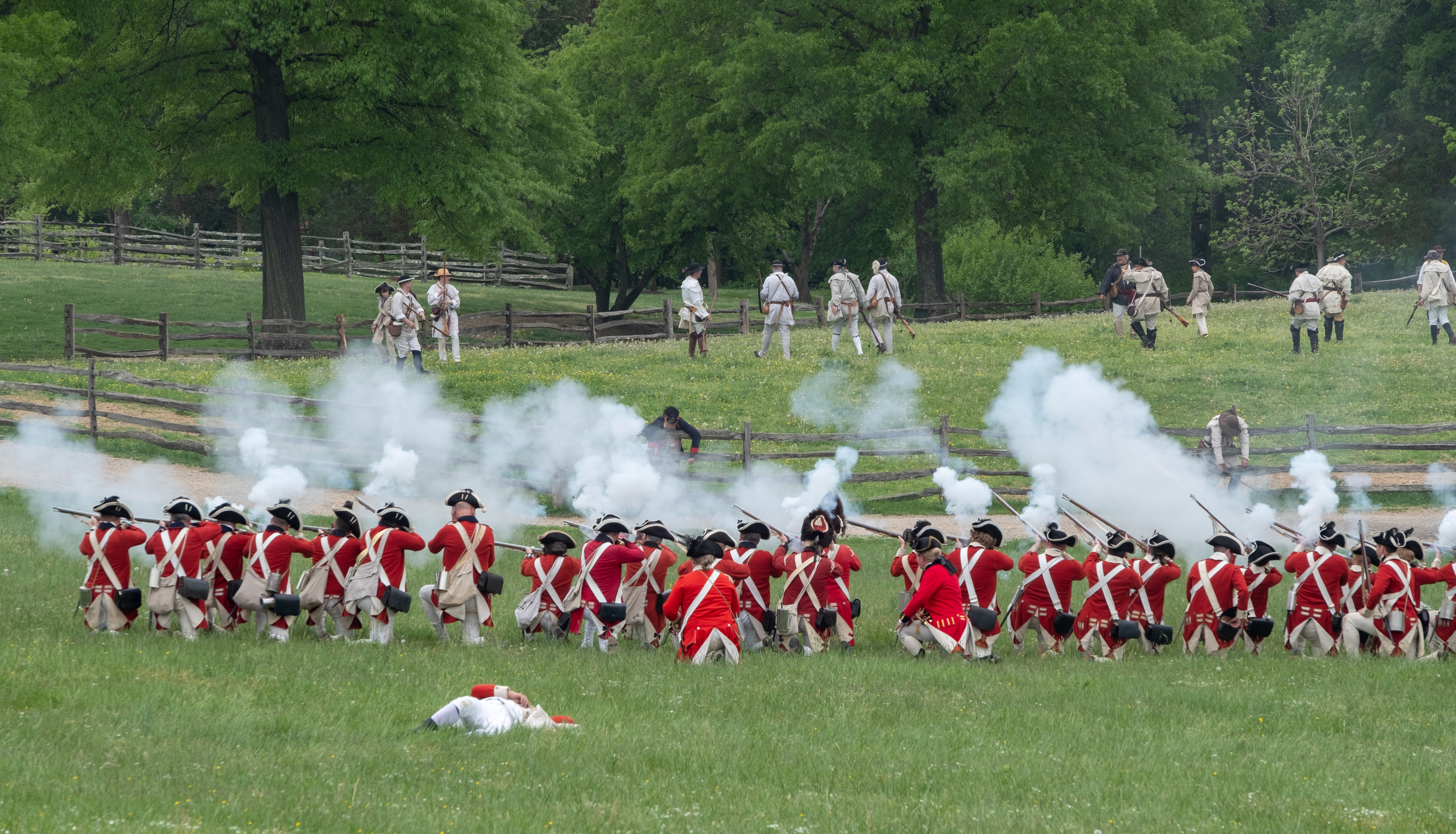 In 18th-century warfare, an important concept is “holding the field”. The winner is the side that has control of the contested ground after the battle is over. The task of the commander is to drive the opposing force from the field. This is done by out-maneuvering your opponent with your formations and application of your forces, an overwhelming number of men or firepower, or outsmarting them through use of the terrain or other conditions. Another form of victory is the simple act of surrender by the opposing commander.

18th-century formations, movements, equipment, and fighting are driven by one weapon

For the most part, every regular soldier on both sides carries some version of the smoothbore flintlock musket. Some specialty units, mostly on the American side, might instead carry a flintlock rifle. Officers also carry a sword or a spontoon.

The regular troops have a bayonet for their musket, an approximately 17 inch long spear that fits on the front end of the barrel. Troops also carry an infinite variety of cutting and stabbing weapons, such as an ax or hatchet, as part of their uniform or as an unofficial backup for their musket and bayonet.

Throughout the battle, troops reposition the artillery guns

The American Revolution was fought largely in a wilderness environment. With few fixed military positions and a limited network of well-kept roads or bridges, armies could not support large, heavy artillery. The most important artillery provided immediate and short-range support to infantry. Both the American and British forces use small artillery guns.

These small guns maneuver quickly, either alongside or just behind the infantry lines. The cannon might fire bags of smaller musket balls, causing more disruption in the enemy lines than a single large cannonball. It takes five or six men to fire these small guns. Maneuvering them across terrain using ropes and wooden staffs took many more since people, not animals did the work.

Regular infantry are the largest and most prominent group. They are the full-time, hopefully well-trained and well-equipped, dedicated core of the army. They largely determine how a battle is fought and if it is won or lost.

The militia consists of part-time soldiers from various colonies. Their training, equipment, and reliability vary widely. They typically muster each spring and return home in the fall.

The rifle companies are a full-time component of the army, armed with rifled hunting weapons. Often they fight as individuals, may not learn the infantry drill, or use formations.

Musicians are important in battle because the commander uses them to tell his forces what to do. Using coded sounds of the fife and the drum, commanders on both sides manage the battle.

Dragoons are small groups of men on horseback, who serve as a scouting force and fight on the periphery of the battle. They strike quickly against targets of opportunity and disrupt enemy forces.

Artillery unit of light caliber guns are attached to infantry regiments as support, working from the flanks (or rear) of the infantry.

Civilians are common and necessary part of the armies. Both sides employ large numbers of women and men to serve logistical support: including laundry, cooking, nursing, waggoneers, drovers, supply, etc.

Present at some engagements are Hessian (German) forces, who are paid fighters for the British in blue uniforms. French forces join the Americans in all white uniforms.

Explore the American and British camps

The troop tents, which sleep up to six soldiers, are lined side by side in several rows at the front of the camp. Behind those are the officers’ and administrative tents. In the rear are the kitchen fires and the food service area.

Often in separate camps are the artillery and gun crews along with their cannons and gear. The dragoons (or cavalry) also have their own camps with their horses, feed, and gear.

The British and American camps are often quite similar, although the British encampments tend to have more structure and order.

Ask the soldiers about their uniforms

In general, American regular forces wear blue coats and the British regulars wear red. American regiments add colored trim to their blue coats to denote specific colonies or types of units. For example, artillerymen wear blue coats with yellow trim. Many units also have their regimental number on their buttons or hat badge. Soldiers who appear to be in civilian dress are probably either militia or members of a rifle unit. Musicians usually wear coats of the opposite color from their troops. Dragoon uniforms tend to be dashing and flamboyant.

The regulars march in fairly precise formations, trying to stay together in a straight line. They fight in two ranks, one behind the other. When they have to change direction, they do so in a mass movement called a “wheel”, where the entire line rotates to the left or right.

Using a method called volley fire soldiers load and fire their muskets together. The volley causes the most damage to the enemy line, compared to random individual firing. The militia is usually attached to these regular units and in theory, learns their drills and weapons.

The rifle units tend to fight in less formal ways and are not trained in mass formation fighting tactics. They tend to operate on the edges of the battlefield, standing in tree lines or behind fences and buildings. The horsemen, or dragoons, provide surprise strikes at critical moments, disrupting an attack or capturing a cannon and its crew.