On February 13, 1793, a joint session of Congress counted the Electoral College votes from the second presidential election and George Washington was unanimously elected, again. He would spend a difficult second term desperately preserving the new nation in the face of rebellion and foreign wars.

President Washington considered retirement after one term, preferring a return to the quiet comfort of Mount Vernon. He was bothered and disheartened by the emerging political divisions. However, Washington also feared that the country would irreparably pull and split apart, and was implored by his close associates to serve an additional four years.

Differences of opinion didn't concern President Washington. They could even be useful, until he came to realize the very personal nature of the differences between two of his cabinet members: Alexander Hamilton and Thomas Jefferson. 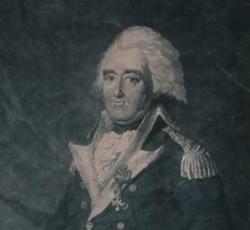 The Battle of Fallen Timbers

As the United States looked to consolidate its borders and secure room for expansion in the Northwest Territory, the local American Indians had resisted fiercely, inflicting costly defeats on the poorly-trained and equipped military forces sent to pacify the region in 1792.

In 1791, Congress legislated an excise tax on whiskey and distilled spirits. The revenue from these taxes was intended to help lessen the federal deficit. In parts of western Pennsylvania and western Virginia, however, the law and its tax inspectors were not met kindly, and rebellion threatened to tear apart the new nation.

By 1794, the Whiskey Rebellion threatened the stability of the nascent United States and forced President Washington to personally lead the United States militia westward to stop the rebels.

In February 1793, France went to war with Great Britain and its allies. Washington resisted the inclination to support America's stalwart Revolutionary War ally. Instead, he set a precedent by insisting that the United States remain neutral when foreign nations went to war.

Seeking American support, France sent an emissary, Edmond-Charles Genêt, to the United States. Genêt sought to undermine a neutrality agreement that Washington had signed earlier that year by exploiting political divisions between supporters and detractors of the French Revolution.

Ron Chernow discusses the first time American neutrality, which had been championed by Washington, found itself under attack. 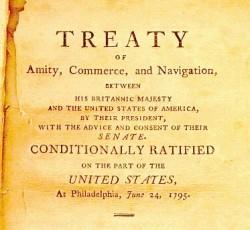 Avoiding Another War with Britain

By spring of 1794, America appeared to be on the brink of war with England. President Washington chose to nominate Supreme Court Chief Justice John Jay as a special envoy to negotiate disputes between the two nations. 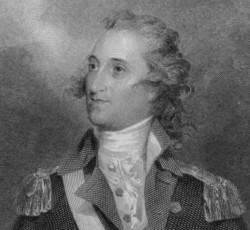 Friendship, Limits, and Navigation with Spain

Negotiated by Thomas Pinckney in Madrid on October 27, 1795, the treaty established intentions of friendship between the United States and Spain as well as guaranteed the United States navigation rights on the Mississippi River. 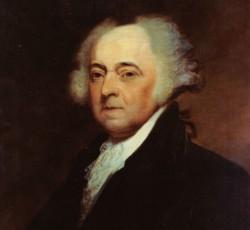 Birth of a Two Party System

Washington despised partisanship and voiced his concerns regarding political disunity throughout his presidency. But by June of 1793, two societies had been formed in Philadelphia: The German Republican Society and the Democratic Society of Pennsylvania

"Having now finished the work assigned me, I retire from the great theatre of Action."

In 1796, as his second term in office drew to a close, President George Washington chose not to seek re-election. Mindful of the precedent his conduct set for future presidents, Washington feared that if he were to die while in office, Americans would view the presidency as a lifetime appointment. Instead, he decided to step down from power, providing the standard of a two-term limit.

Press Attacks on the Washington Administration

By the end of 1792, there was a recognizable opposition party, centered around disgruntled Secretary of State Thomas Jefferson; newspapers gave this party one of their strongest means of critiquing the Washington administration.

Did you know that George Washington vetoed only two bills as President? Learn more about how Washington shaped the role and function of the President of the United States.

Aware that he would be closely scrutinized, President Washington self-consciously chose clothing and household furnishings that would convey a particular message about his style and character.

On the advice of his cabinet, President Washington chose to make his Second inauguration far less public than his first, and set the record for the shortest given by any President: 135 words briefly acknowledging his reelection.

I am again called upon by the voice of my country to execute the functions of its Chief Magistrate. When the occasion proper for it shall arrive, I shall endeavor to express the high sense I entertain of this distinguished honor, and of the confidence which has been reposed in me by the people of united America.

Previous to the execution of any official act of the President the Constitution requires an oath of office. This oath I am now about to take, and in your presence: That if it shall be found during my administration of the Government I have in any instance violated willingly or knowingly the injunctions thereof, I may (besides incurring constitutional punishment) be subject to the upbraidings of all who are now witnesses of the present solemn ceremony.

George Washington’s Farewell Address spoke to contemporary concerns that the Union was weak and vulnerable to attacks from internal and external enemies. But even after the uncertainty of the early national period had passed, his message of unity remained powerful.

The Farewell Address endures as a critical founding document for issues of Union, partisanship, and isolationism as is still recited annually in the United States Senate, a tradition dating back to the Civil War.

Compilation of senators reading Washington's farewell address on his birthday over the years. A tradition…

This law restricted American ships from participating in the Atlantic slave trade.

Established rules to be followed in granting national citizenship.