An 18th-century portrait, once thought to portray George Washington’s enslaved cook Hercules, is giving up some—but not all—of its secrets.

An intriguing painting in the collection of Madrid’s Museo Thyssen-Bornemisza depicts a black man with a faint smile at the corner of his lips. He is outfitted all in white, including a 1790s-style coat, neck ruffle, and tall white hat. According to the museum’s records, Portrait of George Washington’s Cook was attributed to Gilbert Stuart, the artist behind the iconic Athenaeum portrait of Washington. 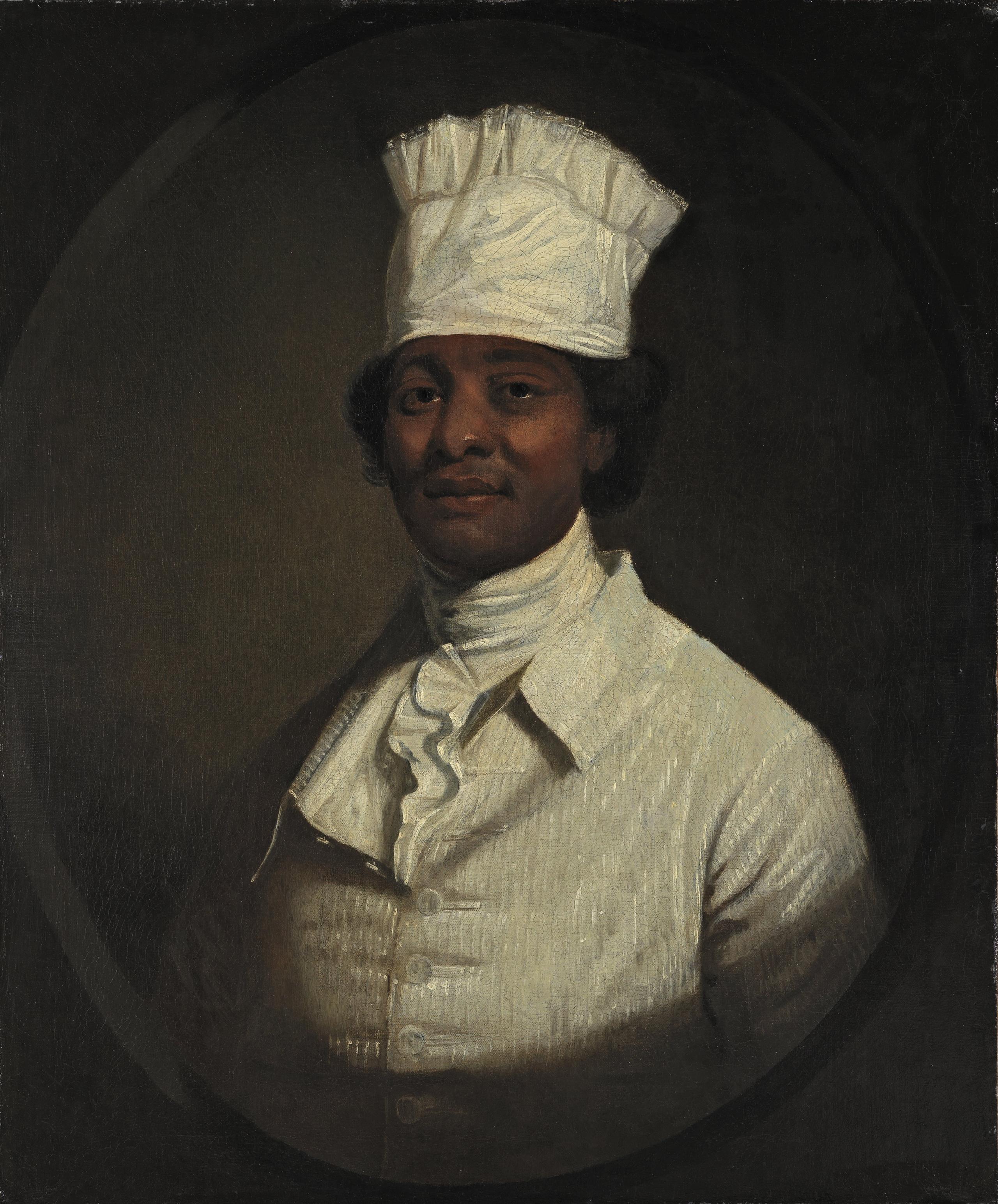 In this episode of "Intertwined Stories," meet Hercules, a man who was enslaved by the Washingtons, worked as their chef, and self-emancipated from Mount Vernon in 1797.

The painting’s subject was long suggested to be Hercules, the enslaved cook who served the Washingtons at Mount Vernon and the Philadelphia executive residence. But there was no record of Gilbert Stuart painting the Washingtons’ cook; indeed, for Stuart to paint a portrait of any enslaved man would have been exceedingly rare. Adding to the intrigue, Hercules escaped from Virginia in February 1797, evading capture and disappearing from the historical record. Theories of the painting’s origins abounded, but experts remained skeptical.

Learn more about the life of Hercules

When the Museo Thyssen-Bornemisza generously agreed to loan the portrait to Mount Vernon for the first six months of Lives Bound Together, an exhibit focusing on the history of slavery at Mount Vernon, an opportunity arose to investigate further. In March 2017, a team of art historians, curators, and conservators convened to examine the painting in person before its return to Madrid. The outcome was conclusive: The portrait was not by Gilbert Stuart, did not depict Hercules, and was not even of a cook.

Now, new research from the Museo Thyssen-Bornemisza is shedding light on this long-misunderstood piece of art.

What we know of the portrait’s story begins in the early 19th century, when it was owned by English painter Sir Thomas Lawrence. Sometime before his death in 1830, Lawrence gave the painting to his childhood friend John Hulbert as a wedding gift. This history is recorded in an early 20th-century file in the Witt Library at the Courtauld Institute of Art in London. Here, an image of the portrait is filed under “Gilbert Stuart—Unidentified Sitters.”

In 1946, the portrait was purchased by Daisy Fellowes, an American socialite living in Paris. She displayed it in the dining room of her luxurious hôtel particulier, which was featured in a 1977 magazine. A caption identified the work as “Painting by Gilbert Stuart (an alleged portrait of the cook of George Washington).” The painting was purchased at auction in 1983 by Baron Thyssen-Bornemisza, who opened his namesake museum in 1992 (the Spanish government purchased the collection in 1993).

That the portrait had no documented association with George Washington prior to 1977 makes such a connection to his cook fundamentally unsubstantiated. There was no credible reason to believe that this was Hercules.

So, who is the man in the painting?

Art historian Dorinda Evans writes that, given the painting’s original location of England, “it is possible that the sitter was the African servant or enslaved black attendant of a wealthy British citizen. In such a case, his outfit would bear witness to that citizen’s status. But while his striped silk coat could be seen as conventional household livery, the tall hat – in high-quality linen or silk, topped with lace – is quite extraordinary. Its design makes the identity of the sitter open to question. In fact, the representation of this stunning crown has played (and must play) an operative role in the interpretation of the picture.”

According to the Museo Thyssen-Bornemisza, recent research suggests that the sitter can be identified as a man from the island of Dominica, as his head covering is similar to that of a few people depicted in the works of Agostino Brunias (1730−1796). “The sitter’s extraordinary lace-topped linen or silk cap and elegant clothing resemble those of the free Antilleans portrayed by this Italian-born painter, who was active in the West Indies between 1770 and 1780,” the museum’s website reads. “If the Thyssen sitter is Dominican, he probably fled to England as part of the exodus of English planters just before the French claimed the island from the English in 1778.”

For modern viewers, tall white headwear automatically signifies a chef’s hat. “But that archetypal hat did not come into being until the 1820s, too late for this sitter but perfect for complicating interpretations of the portrait,” Dr. Evans explains. “The chef’s identification not only stuck but also got to be elaborated over time. For about 40 years in the 20th century, the Thyssen portrait was misidentified and published as Gilbert Stuart’s portrait of George Washington’s cook.”

For modern viewers, tall white headwear automatically signifies a chef’s hat. “But that archetypal hat did not come into being until the 1820s, too late for this sitter but perfect for complicating interpretations of the portrait.”

Considering the man’s neckpiece and the cut of his coat, as well as the painting style, researchers can date the portrait to about 1780. As a whole – including the canvas size and painted oval – the picture is convincingly English, but the sitter need not be.

During that study day in 2017, Mount Vernon assembled some of the world’s foremost Gilbert Stuart experts, those intimately familiar with the artist’s body of work. To allow for direct comparison, the Thyssen painting was set up between two authenticated Stuart portraits: one of the artist’s many replicas of his Athenaeum portrait of Washington and a ca. 1804 portrait of Arabella Maria Smith Dallas (a contemporary of the Washingtons in Philadelphia).

The results of this juxtaposition were striking. The portrait from the Thyssen was more linear and painstaking than Stuart’s paintings, lacking the artist’s trademark fluid brushwork and disregard for costume details. To the experts, it was obvious: This painting was not by Gilbert Stuart.

Who, then, is the artist behind this portrait? The latest research released by the Museo Thyssen-Bornemisza asserts that, with the face and hat rendered in relatively broad brushstrokes, the portrait follows the general painting style of Sir Joshua Reynolds (1723-1792), the first president of the Royal Academy in London.

“The artist of this likeness was clearly talented and apparently intrigued by the challenge of convincingly rendering flickers of light on the coat’s slightly ribbed, cream-coloured surface,” writes Dr. Evans. “The dark colouring of the sitter’s skin and hair in shades of brown, rust and black provides a marked contrast to the nuanced differences in the sheen of the off-white clothing.”

Fortunately, the renewed interest in this painting also led to some answers about Hercules’s fate. Ramin Ganeshram, executive director of the Westport (Connecticut) Historical Society, upon learning about the findings, was inspired to dig back into the historical records. Working with genealogist and archives manager Sara Krasne, she discovered that Hercules had been hiding in plain sight—using the last name of his first owner, Washington neighbor John Posey.

The records for the Second African Burying Ground in New York City note that on May 15, 1812, a Hercules Posey died of tuberculosis at 64 years old. The man, whose age aligned with estimates of those of the Washington’s cook, had been born in Virginia. Posey is listed in New York City directories of 1809, 1810, and 1811 as a laborer, but in 1808 as a cook. While Hercules Posey may not be the subject of any painting, the exercise taught us more about his life now than ever before.