Martha Washington was fortunate to have been raised in a family that could teach her to read and write.

While no letters survive from the first two and a half decades of her life, Martha Dandridge Custis’ marriage to George Washington in 1759 greatly expanded her world and, thereby, her correspondence. From her oldest surviving document yet found, a 1757 invoice written in her hand following the death of her first husband, until her death in 1802, Martha Washington maintained a lively correspondence with siblings, friends, family, and merchants that helps present a more three-dimensional portrait of America’s first first lady. Thankfully, many of those documents still exist today.

Though it’s widely believed that Martha Washington destroyed all of her correspondence with George Washington after his death, four letters and the below postscript managed to slip past her censorship. The six-line greeting, added at the end of a letter from the General’s distant cousin Lund Washington, provides a small glimpse into the couple’s warm, affectionate relationship.

It was with very great pleasure I see in your letter that you got safely down. We are all very well at this time but it still is rainney and wett. I am sorry you will not be at home soon as I Expected you. I had reather my sister woud not come up so soon; as May woud be much plasenter time than april. We wrote to you last post. As I have nothing new to tell you, I must conclude my self your most Affectionate.

A Note to Fanny

Frances “Fanny” Bassett Washington was one of Martha Washington’s favorite nieces and also one of her closest correspondents. In fact, Fanny and her husband George Augustine Washington managed the Mount Vernon estate for years, including while George Washington served as president.

In this excerpt of a letter to Fanny, First Lady Martha Washington inquires after Fanny’s children and writes longingly of a return to Mount Vernon. This letter remained unpublished until the 2022 release of The Papers of Martha Washington.

I was very much pleased to hear that you had arrived well at mount Vernon with your children. The President tells me that Fayette is grown a fine boy. I am sorry dear Maria was so much indisposed. Colds of that kind children are very subject to— she will I hope soon get better … I am very much obliged to you my Dear Fanny for offering to preserve fruite for me against I come to mount Vernon— I think it will be quite unnecessary as our stay cannot be long and while we are thare the apples and peaches will be ripe and will answer any purpose I shall want while I am thare— I used to be fond of having every thing done with an expectation that we should return to stay at home but now I begen to despair of ever being settled their—and while I only goe thare on a visit I wish to have as little troble as I can.

Who Was Fanny Bassett?

Due to the outpouring of sympathy following George Washington’s death on December 18, 1799, nearly a quarter of Martha Washington’s surviving letters pertain to her husband’s demise. Well-wishers ranged from the esteemed Marquis de Lafayette to one man writing from prison.

In a letter dated December 27, 1799, President John Adams asks, in accordance with a recent Congressional resolution, if Mrs. Washington would “assent to the interment of the remains of the General, under the marble monument to be erected in the Capitol, at the City of Washington, to commemorate the great events of his military and political life.”

The Centinel of Freedom reported on January 14, 1800, that Mrs. Washington’s response (below) produced in Congress “a sensation not to be described—the manly tears of several members flowed in quick succession—and a deep melancholy seemed to pervade the venerable assembly.” Ultimately, Martha’s private wishes prevailed, and the General’s body remained at Mount Vernon. George and Martha Washington are both interred in the New Tomb at Mount Vernon, where millions of visitors have paid their respects over the years.

While I feel with keenest anguish the late Dispensation of Divine Providence, I cannot be insensible to the mournfull tributes of respect and veneration which are paid to the memory of my dear deceased Husband— and as his best services and most anxious wishes were always devoted to the welfare and happiness of his country—to know that they were truly appreciated and greatfully remembered affords no inconsiderable consolation.

Taught by the great Example which I have so long had before me never to oppose my private wishes to the public will—I must consent to the request made by congress—which you have had the goodness to transmit to me— and in doing this I need not—I cannot say what a sacrifice of individual feeling I make to a sence of public duty.

With greatfull acknowledgements and unfeigned thanks for the personal respect and evidences of condolence Expressed by congress and your self—I remain very respectfully Sir your most obedient Hble servant. 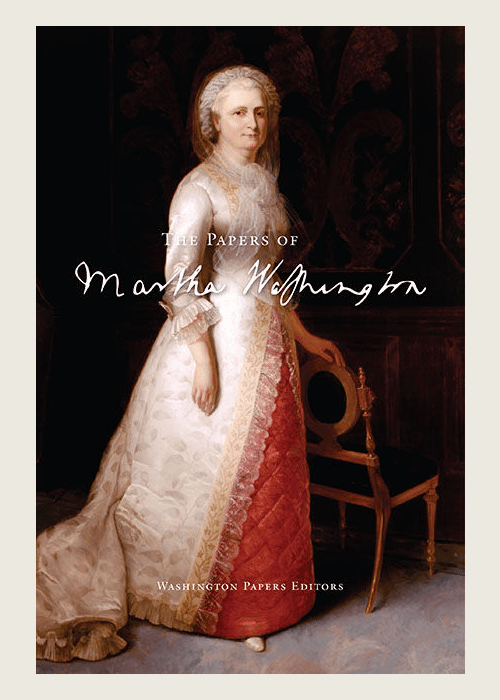 The Papers of Martha Washington

Published by the Washington Papers, a joint initiative between the University of Virginia and the Mount Vernon Ladies’ Association, the volume contains nearly 400 pieces of correspondence, including 80 previously unpublished letters to or from Mrs. Washington, the four surviving letters and one brief postscript between Martha and George Washington, and more than 170 financial documents. Also included are contextual editorial essays, the inventory of Martha Washington’s possessions at the time of her death, a detailed list of the division of the Custis dower slaves, her last will and testament, family trees, and original maps created by historian and cartographer Rick Britton. Editors also set the record straight by correcting previously misdated letters, improving prior transcriptions, and identifying spurious correspondence and forgeries.

“This edition endeavors to accomplish what few scholars have attempted before,” editors explain, “to extract [Martha Washington] from her role as a secondary character to her husband and place her in the forefront of the historical narrative.”

Purchase "The Papers of Martha Washington"

The Fascinating Life of Martha Washington

Even before she became the first First Lady, Martha Washington led a fascinating life. Learn about her first marriage to Daniel Parke Custis, her beloved children and grandchildren, and her incredible relationship with the father of our country.