1. Washington was afflicted with dental troubles all his adult life

Despite his legendary physical strength and iron constitution, George Washington’s failing teeth were a source of regular suffering throughout his entire life. At age 24, Washington recorded in his diary that he paid 5 shillings to a “Doctr Watson” who removed one of his teeth. Letters and diary entries later in his life make regular reference to aching teeth, lost teeth, inflamed gums, ill-fitting dentures, and a host of other dental miseries. Payments to dentists and purchases of toothbrushes, teeth scrapers, denture files, toothache medication, and cleaning solutions are also regularly present in Washington’s communications throughout his life.

2. Contrary to popular mythology, George Washington's dentures were not made of wood

3. During the Revolutionary War, Washington used a French dentist who had been providing dental services to high ranking British officers

In 1781, a pre-eminent dentist by the name of Dr. Jean-Pierre Le Mayeur escaped from British occupied New York City and passed through the nearby American lines. Le Mayeur had been providing dental services to Sir Henry Clinton, commander of the British forces in the region, and a host of other senior British officers.

The French born Le Mayeur, disgusted by derogatory comments made by a British officer against the Franco-American alliance, decided he had had enough and packed up his dental tools and headed off to find the Americans. Once it was determined that Le Mayeur was sincere in his desire to serve the American cause, General Washington eagerly sought out his services. The two eventually grew quite close, and Le Mayeur was a frequent visitor to Mount Vernon in the years just after the close of the Revolutionary War.

Come to Mount Vernon and view George Washington's only surviving set of dentures in the Donald W. Reynolds Museum and Education Center.

4. Washington’s dental troubles helped to mislead the British army in 1781

Washington, who always treated his dental troubles as a state secret, was mortified to learn that a mail packet that included a personal letter requesting dental cleaning tools had been intercepted by the British. Washington’s letter to his dentist pointed out that he had “little prospect of being in Philadelph. soon..” and that the tooth scrapers should be sent to him outside New York by mail.

When Sir Henry Clinton, commander of the British forces in North America, saw this personal letter he was convinced that the other official military correspondence within that same intercepted packet must be genuine. Even worse for Clinton and the British, the contents of the packet and Washington’s claim that he would not be in Philadelphia anytime soon convinced the British high command in New York that the American and French forces encamped around New York City would not be marching south to threaten Lord Cornwallis’ isolated command near Yorktown.

What Clinton did not know was that Washington and Rochambeau had just planned out their movement south to trap Cornwallis at Yorktown. Clinton’s failure to more rapidly reinforce or rescue Cornwallis led to the complete British defeat at Yorktown on October 19, 1781.

5. Washington retained several of his pulled teeth for use in his dentures

Aware of his failing dental health, George Washington retained several of his pulled teeth within a locked desk drawer at Mount Vernon. In a Christmas Day 1782 letter, Washington wrote to Lund Washington, his distant cousin and the temporary manager of Mount Vernon, requesting that the teeth be wrapped up and sent to him in Newburgh, New York. Washington hoped that these original teeth could be used within new dentures that were being fitted for his use.

"In a drawer in the Locker of the Desk which stands in my study you will find two small (fore) teeth; which I beg of you to wrap up carefully, and send inclosed [sic] in your next letter to me. I am positive I left them there, or in the secret drawer in the locker of the same desk."

Deep within one of Washington’s account books is an entry which details Washington’s purchase of nine teeth from “Negroes” for 122 shillings. Whether the teeth provided by the Mount Vernon enslaved persons were simply being sold to dentist Dr. Jean-Pierre Le Mayeur or whether they were intended for George Washington, is unknown at this time. Since Washington paid for the teeth it suggests that they were either for his own use or for someone in his family. It is important to note that while Washington paid these enslaved people for their teeth it does not mean they had a real option to refuse his request.

Dr. Susan Schoelwer gives you a tour of Washington's dentures 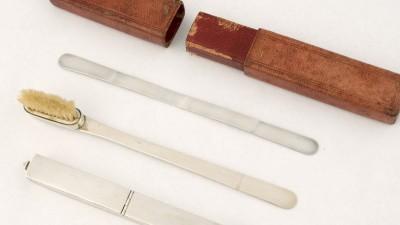 Despite fastidiously brushing his teeth with tooth powder, scraping his tongue of bacteria, and using mouthwash, George Washington lost his first tooth at age 24 and was wearing a full set of dentures by age 57.

His morning routine of dental hygiene did not end with the loss of his teeth, as his five sets of dentures required constant maintenance and attention. Washington likely used this compact toilet set complete with a tooth brush, tooth-powder box, and tongue scraper while traveling during his presidency and subsequent retirement.

explore this object the collection

7. By the time of his Presidential inauguration in 1789, Washington had only one working tooth remaining

Despite all his attempts to save his remaining teeth, Washington was down to just one tooth at the time of his inauguration as the first President of the United States.

This final survivor was finally pulled by Dr. John Greenwood in 1796 and Washington allowed his dentist to retain this famous tooth as a memento. Greenwood eventually had the tooth inserted into a small glass display that he hung from his watch chain.

8. Washington’s dental troubles impacted the shape of his face

Washington was very self-aware of the impact that ill-fitting dentures had on his appearance. In a 1797 letter to Dr. John Greenwood, Washington complained how his ill fitting dentures were “already too wide, and too projecting for the parts they rest upon; which causes both upper, and under lip to bulge out, as if swelled.” In a separate letter the following year, Washington noted that another set of dentures had “the effect of forcing the lip out just under the nose.”

Explore a timeline of Washington's Teeth

See how the dentures were constructed.

Martha Washington evidently had a magnificent set of teeth, but she too needed the use of a partial denture by the time of George Washington’s second presidential term. In 1794 Martha wrote to request a new set of dentures.

"Mrs[.] Washington will be much obliged to Mr[.] Whitelock to make for her a set of teeth – to make them something bigger and thicker in the front and a small matter longer[.] She will be very glad if he will do them as those she has is almost broak [sic][.]"

Well aware of her husband’s travails, Martha regularly urged her children and grandchildren to tend to the care of their teeth.

10. Washington’s dental troubles made him less willing and able to speak

Many contemporaries and historians have postulated that George Washington’s constant dental woes greatly diminished the President’s desire and ability to speak. Always sensitive about his appearance and comportment, Washington was no doubt self conscious about his dentures and the troublesome contraptions also made speaking more of a challenge.

Separate fact from fiction and learn more about the real George Washington.