Equestrian prowess and warfare offered young George Washington his clearest path to fame. His long rides as a surveyor, through the forest on foxhunts, and his bayonet drills in the heat of the summer sun prepared him well for his eventual martial feats on horseback. 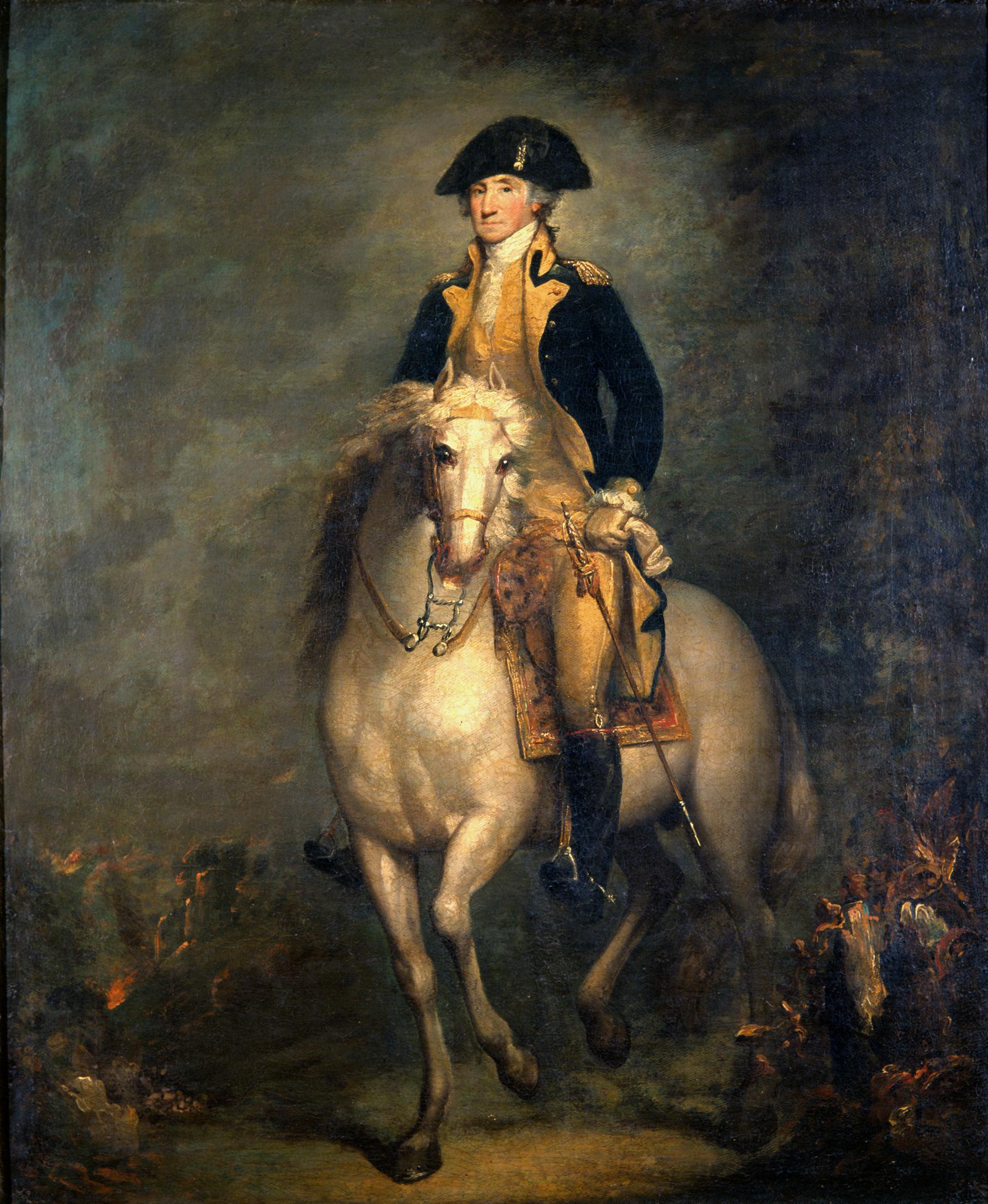 War and sports share an ancient and intimate history. Roman and Greek soldiers, leaders included, trained in sports that provided sets of overlapping physical skills, including, riding, fencing, and thrusting or shooting, all required to do well at war and play.

Like many ancients, the Greek writer Xenophon considered sport to be an excellent school for war and he actively promoted sports and fitness to this end, making himself a modern thinker in his own day. Over two thousand years ago it was a given that excelling at sports and physical feats, gave men confidence to achieve greatness. For example, the epitaph in the tomb of the warring Persian Emperor Darius I (also known as Darius the Great), born circa 550 B.C., reads: "I loved my friends; I was an excellent horseman, and an excellent hunter; nothing to me was impossible." In truth, the same epitaph could have been written for George Washington.

At war, George Washington's equestrian heroics appear to have been aided significantly by good fortune.

The Battle of Monongahela

At the Battle of Monongahela, where he attained the fame that would eventually lead to his selection as Commander of the Continental Army, Washington took several bullets through his coat. After a first, second, third and forth musket ball ripped his uniform, George Washington fought through the gun smoke and confusion even as Native Americans were crushing the skulls of fallen British soldiers nearby. Despite being one of the most obvious targets during the battle, none of the riflemen, most of them natives, shooting from gullies or from behind trees, managed to hit Washington's torso or even scrape his leg. He just kept riding, turning, twisting and dashing in and out of fire.

learn more about this battle 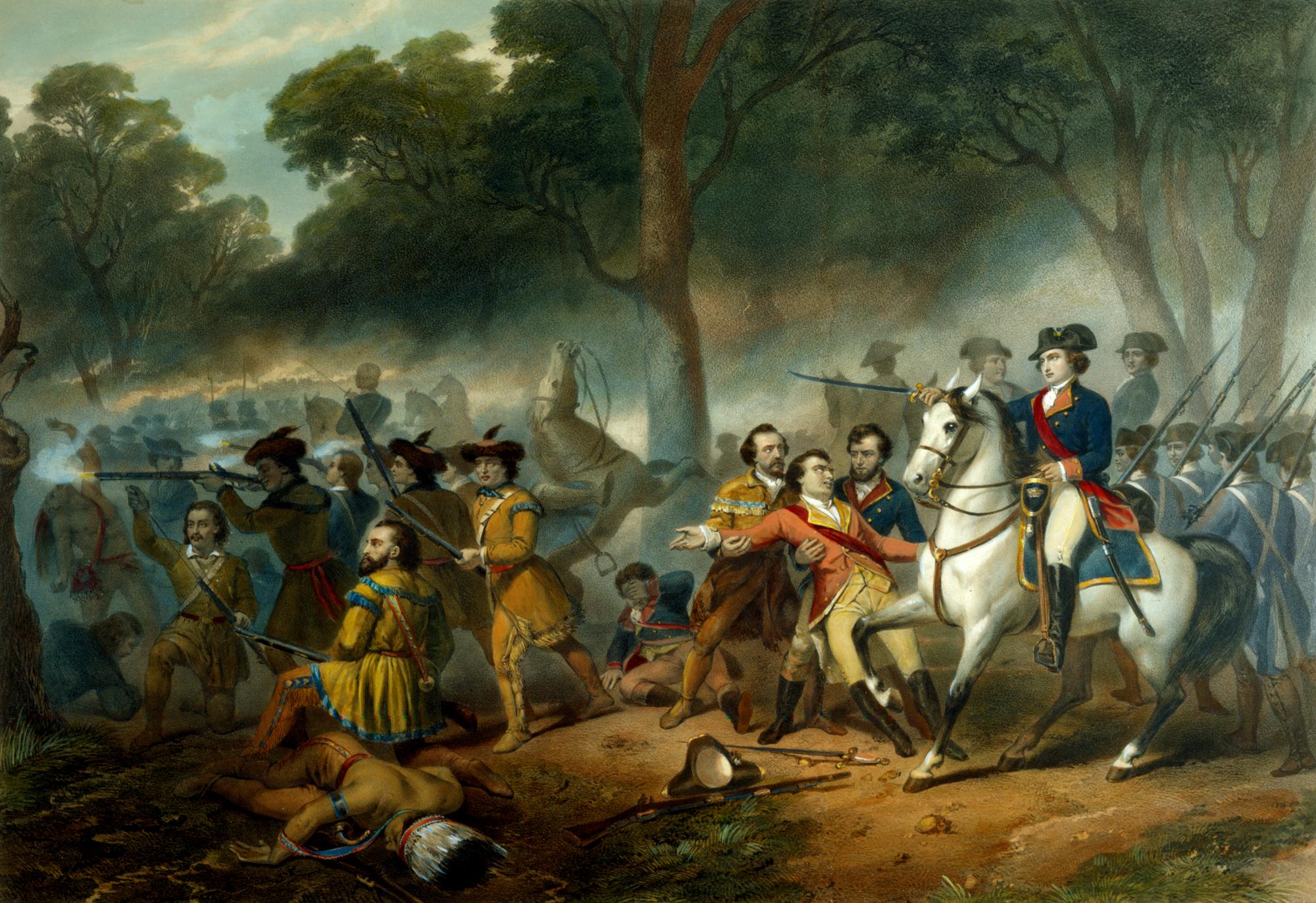 In nearly three hours of fighting, Washington lost two horses. General Braddock lost three horses of his own before he finally tumbled and fell. George Washington looked over to see Braddock knocked off his horse and sprawled out, bleeding from his side. He rushed over to help.

As his personal aide, George Washington carried out every order that Braddock gave him -which included leading a hasty southern retreat back across the river. The dying Braddock also ordered Washington to ride forty miles the same evening back along British lines to Col. Thomas Dunbar's rear basecamp to send up food, rum and hospital supplies. For this last task, Washington had to rely on an infusion; he accomplished it while recovering from an abysmal bout of dysentery, which had forced him to ride into battle with pillows on his saddle.

Step back in time during one of the largest Revolutionary War re-enactments in the region!

Controlling a horse well under fire is, of course, the essence of equestrian warfare.

George Washington was probably no colonial era "horse whisperer," but, as any skilled equestrian knows, controlling a horse is more a matter of understanding his or her temperament and fears than it is a matter of using force or strength to command it. He did use his spurs, but he used them, as any good rider would, sparingly.

Warhorses are trained to perform to easy and light commands, and to be less responsive to the reins than to the legs and the hips of a rider, who often had to otherwise have his hands available to engage his arms with a sword or a gun. Entering into battle on a horse is considerably different than going into battle on foot because you have to make sure that your horse can stand when fired at. Smoke and noise will frighten a horse. They are herd animals and they have to be brave enough not to turn and run when another - say a horse ridden by your foe - gets scared and dashes off in one direction.

Indeed, historically calm horses were bred for war, but more than good breeding, good training was considered the only antidote to panic. In the 18th century, some horses were acclimated to live fire by standing before a line of cannons.

Decades after the French & Indian War, the Marquis de Chastellux described
George Washington's horses and his own excellent control of them.

One morning after breakfast, General Washington offered the Marquis his best and now-retired warhorse and, Chastellux stated, "I found him as good as he is handsome but above all, perfectly well broke and well-trained having a good mouth, easy in the hand, and stopping short in a gallop without bearing the bit."

The Marquis' letter continued his account in a careful examination of Washington's equestrian skills:

I mention these minute particulars because it is the General himself who breaks all his own horses, and is a very excellent and bold horseman, leaping the high fences, and going extremely quick, without standing upon his stirrups, bearing on the bridle, or letting his horse run wild.

Others observed that the horses in Washington's own paddock at Mount Vernon would often approach him in glee when he appeared before them or near to the fence.

During the Revolution, General Washington continued to test his fate on horseback, often to the chagrin of his military aides.

When British forces thought they had Washington, "the old fox," cornered near Trenton on the south side of Assunpink Creek, Lord Cornwallis hesitated at water's edge with nearly 8,000 British troops. It was a military blunder for the ages.

Rather than risk a perilous escape back across the Delaware into Pennsylvania, Washington - clever like a fox -- chose to light campfires as decoys and move up the "Quaker Road" that flanked the British on his left as he moved with his troops through the night 18 miles towards British positions at Princeton, New Jersey. He kept a rearguard with campfires burning, and his men covered their transport wagon wheels in rags to silence them as they sped north.

Even as the Continental Army descended on the college town, British Colonel Mawhood, who had two barking spaniels at the hooves of his horse, had already been called to move south to link up with Cornwallis. British forces, making haste to get to Trenton, spotted the Continentals moving north, and turned to confront them. They faced down rag-tag colonials on an ice-encrusted orchard as the two sides squared off for a classic 18th Century musket battle. Lined up in neat rows like pawns on a chess board, the sides exchanged timed volleys as men began to drop into the snow. Colonel and Doctor Hugh Mercer, George Washington's longtime friend from his French & Indian days, and who ran an apothecary shop in Washington's hometown of Fredericksburg, led Continental column, but within minutes, even as Washington was still approaching the battle, he fell to the ground. British soldiers, their bayonets drawn, swarmed in over the elegant and well-dressed American commander, whom some of them initially mistook to be the American Commander-in-Chief, stabbing him to death. As Mercer's life expired, dozens of Colonel John Cadwalader's Pennsylvania Associators -most of them with artisan backgrounds from downtown Philadelphia --did not flinch. The Associators made a stand, but eventually also began to back away from the torrential British fire.

Arriving as heavy fighting was underway, George Washington, his battle-hardened Virginia riflemen at his side swept in front of the embattled Continental forces, urged the Philadelphians back into the fray. He rode, literally prancing on horseback, before the Pennsylvanians. With added drama, he waved his tri-comered hat and reportedly shouted: "Parade with me my brave fellows! There is but a handful of the enemy, and we will have them directly."

British guns fired, bullets whizzed through the lines. Turning back several fleeing soldiers, Washington led the way, charging up the hill, stopping only when the American column was within 100 feet of the British guns. Face to face with his foe, he shouted for the troops to "Halt!," step up to the line, and then to "Fire!".

The general's aide-de-camp, John Fitzgerald, later told Washington's step grandson that, fearing to witness his general shot dead, he "drew his hat over his face" before removing it moments later to see Washington wreathed in smoke but unscathed and still in full command. Colonel Mawhood fled in a gallop.

The Continentals, with their commander at their side, turned towards panicked British commander and his forces, with George Washington reportedly shouting "It is a fine fox chase, my boys!"

General Washington raced down a gulley in the direction of the fleeing Red Coats, only to be called back off the trail by his own men. The poetic justice in the mockery directed at what was still considered to be the world's most disciplined army was not lost on anyone.

The idea that George Washington carried foxhunting notions into military battle was not surprising, but his lively spirit in the face of horror and gore was astounding to his men.

Starting during the summer of 1776, the story follows the Continental Army as it is repeatedly defeated and driven from New York, south across New Jersey towards the Delaware River.

Even more than at Trenton, George Washington's demeanor and actions at Princeton, when he was still 44-years-old and in the prime of his life, had everything to do with the athleticism, sportsmanship and prowess that he had cultivated over four decades.

He was a specimen to behold as he dashed forward amid the incoming fire, barking orders before pivoting on his horse and charging his foe. British musket balls and cannon shots had missed their mark yet again. It was déjà vu for anyone who knew George Washington's history at Monongahela.

At Princeton, George Washington had asked his troops for nothing more and nothing less than what he demanded of himself as their leader; qualities that included, daring, speed, stamina, stealth, strength, and selflessness.