A series of savvy decisions kept Washington on the forefront of American industry. 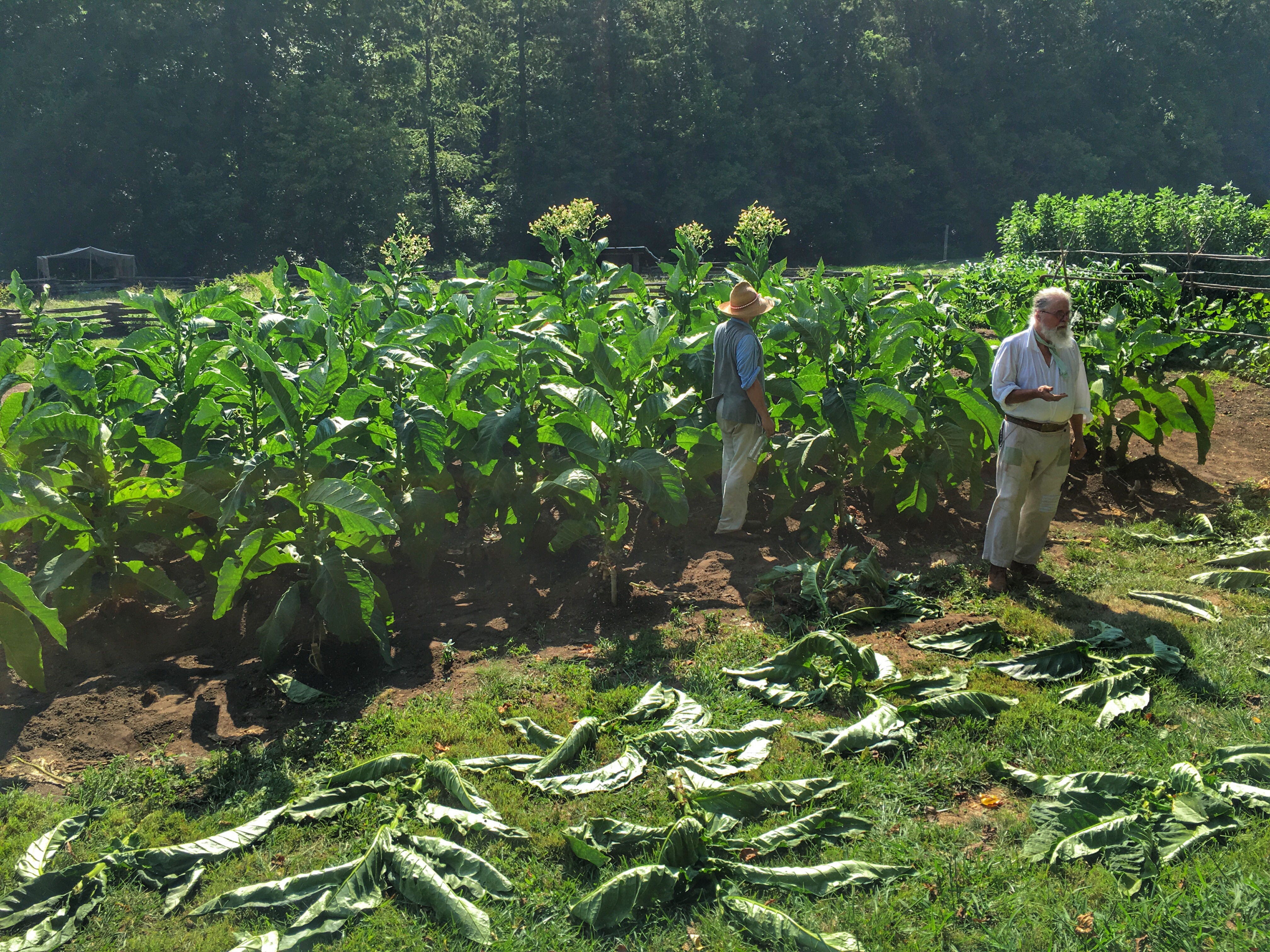 The English colony in Virginia was founded as a business enterprise, and from the very beginning, the desire for profits drove much of its governance and development. Colonists quickly hit on tobacco, highly in demand in European markets, as the principal cash crop for Virginia planters.

Initially, Mount Vernon was no different, relying on tobacco for most of its economic development. But by the time George Washington took over management of the estate in 1754, he had already realized that increasing his arable land was necessary if he were to continue to support tobacco cultivation. The savvy Washington set out to increase his holdings and, more gradually, to diversify his interests.

In December 1754, the Mount Vernon estate consisted of 2,298 acres, which included the 2,126-acre original Mount Vernon tract and the land known as the Mill tract. This smaller piece of land was 172 acres and featured a small country mill. It was located about one-third of a mile north of where, in 1770–1771, Washington constructed a merchant gristmill. This earlier mill was key to his economy, but it was only designed to fulfill the needs of internal consumption on the estate.

By 1760, Washington had purchased three neighboring farms, expanding the size of his estate considerably. The first acquisition came in December 1757: 500 acres above the mill tract from Sampson Darrell. In May 1760, he purchased another 1,806 acres from William Clifton: a farm Washington referred to as “the neck” that was just west of the main Mount Vernon tract. Later that same year, Washington purchased 238 acres bordering the Clifton tract along the west bank of Little Hunting Creek from George Brent. These two tracts combined to become River Farm, one of his largest and most productive pieces of property. With these early land acquisitions, Washington essentially doubled the size of his estate, bringing his holdings to 4,842 total acres.

River Farm, with its frontage along the Potomac River, opened another economic opportunity for Washington—an expansion of his commercial fisheries. During the spring spawning season, these fisheries brought in upwards of one million fish, a harvest that, preserved in salt, fed the estate’s enslaved and paid workers and was sold at market for a healthy profit.

From 1761 to 1772, Washington grew his estate by another 1,899 acres by purchasing land. The enlargement of Muddy Hole Farm, Dogue Run Farm, and the woodland in the center of Mount Vernon brought the total estate to 6,503 acres. The question now was what to do with the new land holdings. 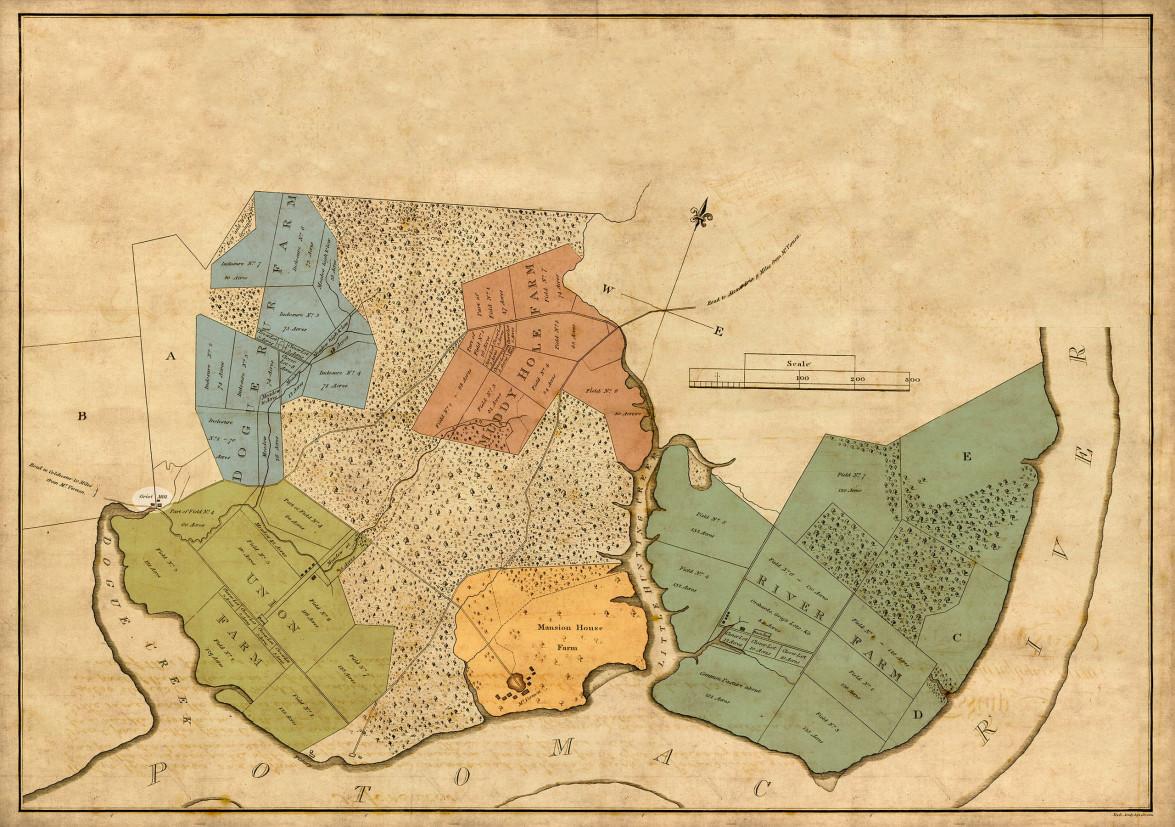 A Map of General Washington’s Farm From a Drawing Transmitted by the General.

Through the early 1760s, Washington continued to plant tobacco as his cash crop. However, many years of tobacco grown on the same land led to a predictable result: land exhaustion. By 1764, Washington had suffered some bad tobacco crops, and as a result, he was unable to compete well with other Virginia planters. The British system that controlled tobacco also impacted him negatively. All tobacco had to be inspected and shipped to England or Scotland to be sold through the European markets. Fees were assessed at nearly every stage of the system, placing planters in the colonies at a great disadvantage.

To maximize the value of his new cash crop, the wheat needed to be processed into high-quality flour for the export markets, chiefly in the West Indies. The islands there produced sugarcane, but needed flour and meal for bread. Many mills in colonial America had been shipping flour and meal to these markets since the 1680s. This trade began when the mainland colonies of British America were able to feed their own populations and had a surplus of grain. Their ships returned loaded with rum, sugar, and molasses.

However, the water mill that Washington owned was not up to the task of producing export flour for the booming trade. As early as 1760, he knew this small country mill was in need of repair or complete rebuilding. The age and deterioration of the “works”—the wood gearing and wheel of the mill—meant very poor output. The mill also did not contain all the necessary components to produce the superfine and fine flour desired by export markets. It was clear to Washington that he needed a new merchant gristmill, and in 1770, construction of this new, larger facility began along Dogue Creek. The location was selected for two key reasons, both related to water. First, this new mill would run larger millstones and machines for sifting flour and would require more water power, necessitating construction of a dam and large mill pond. Second, poor roads meant that the ability to transport the flour by boat, down the creek and onto the Potomac, would be a great advantage.

Therefore, with the help of his neighbor to the south, John Ballendine—who owned a gristmill, saw mill, and furnace at Occoquan, making him extremely knowledgeable on the subject—Washington selected a location where Dogue Creek widened and was navigable by smaller boats. To bring water to this site, a mill dam and pond were constructed at a higher elevation more than two miles to the west, at the farthest reaches of Dogue Run Farm. Digging the long mill race—an earthen canal connecting the pond and mill—took more than a year to complete. This new merchant gristmill opened for business in 1771, and that summer Washington exported 128,000 pounds of flour, generating the first of many years of steady income for the estate.

It is interesting to look at the income streams as accounted for in February 1798. Clearly, diversification and sustainability were the themes for Washington as he developed Mount Vernon. The change from tobacco to wheat was vital, while the expansion of his blacksmith shop and the initiation of commercial fisheries also provided consistent revenue.

Perhaps Washington’s most lucrative venture was his whiskey distillery. In 1797, Washington hired a Scot, James Anderson, as farm manager. Anderson proposed that a distillery be constructed next to the gristmill. Although hesitant at first, Washington relented, and the first production was done in the cooperage near the gristmill using two stills. When the first runs proved successful, Washington constructed a large commercial distillery with five copper pot stills. The new operation produced 4,500 gallons of whiskey in 1798, almost 11,000 gallons of whiskey in 1799, and smaller quantities of peach and apple brandy, making his distillery one of the largest in the country. In 1799, the enterprise yielded a net profit of $1,858—much greater revenue than any other business at Mount Vernon. Plus, the fact that the whiskey in this time period was not aged, and therefore, was sold soon after it was produced in the local market, meant quick returns for Washington.

The records clearly point to the management skills Washington possessed, which contributed to a well-run and profitable estate. It is sad that upon his retirement from the presidency and his return to his home, he only enjoyed about two years back on the land he knew and loved so dearly before his death on December 14, 1799.

George Washington was not born to great wealth, but he achieved that status in his lifetime through a combination of land acquisition—both across Virginia and along the American frontier—shrewd business acumen, and impeccable management skills. Although not all of the land holdings proved lucrative, Washington's successful enterprises made him, in absolute terms, one of the wealthiest Americans of his day, whose business decisions made a profound impact on the economy of the nation he founded. 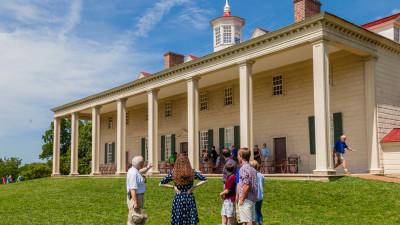