How did people stay warm during the 18th century?

Keeping warm in the 18th century was not an easy task. Most homes, including Mount Vernon, only had wood-burning fireplaces. This meant that on the coldest days, even with a fire burning, parts of a room might not get above freezing. If the Washington family followed the same pattern as many Virginia families they selected one smaller room to spend much of their days and dressed in many layers. While at Mount Vernon, it is possible the family spent much of their time in the Little Parlor. As the smallest sitting room on the first floor, it would have been the easiest to heat, which would have been seen to by enslaved workers constantly feeding the fire. George Washington probably spent much of his time in the Study.

A young member of the household recalled many years later that after breakfast, "if there were guests (and it was seldom otherwise), books and papers were offered for their amusement; they were requested to take good care of themselves.…"1 Music and dancing were other possible ways to spend the hours indoors. Sometimes one of Martha Washington’s granddaughters would entertain the household with her singing and playing. A somewhat smitten Polish visitor, Julian Ursyn Niemcewicz, said of Nelly Custis that, “she plays the harpsichord, sings, draws better than any woman in America or even in Europe.” On the last night of his stay on the plantation, he sadly commented, “In the evening, for the last time, pretty Miss Custis sang and played on the harpsichord.”2

To keep warm at night, precautions were taken in the bedchambers. The enslaved chambermaids would add a heavy wool bed rug and additional blankets to the beds for the winter months. In the Chesapeake region, rugs were often imported from England and were especially popular in the years before the Revolution. A brass bed warmer filled with hot coals or embers would have been run between the linen sheets to take off the chill. The bed curtains were drawn closed each night to provide the sleeper with some protection from cold drafts. In the early hours of the morning, an enslaved maid would light a fire, allowing the room to warm before the Washingtons or their guests got out of bed.

Keeping warm was even more difficult for the enslaved community. The standard slave quarter on Mount Vernon’s five farms was a rough one-room log structure with a wooden chimney, measuring about 225 square feet. Some dwellings were slightly larger and divided into two rooms, each housing a different family. As many as eight people could be crowded into a single room. They slept on pallets or on the dirt floor.

Enslaved field workers like Priscilla, a “laboring woman” at Dogue Run Farm, received just one suit of clothes, a single pair of shoes, and a wool blanket per year. Included in the clothing ration was one or two specialized articles for summer and winter. Made in mass quantities, the linen and wool garments were coarse, plain, and often ill-fitting, uncomfortable, and not especially warm.

Despite the poor clothing, enslaved workers were still expected to work from sun up to sundown. During the winter, this meant shorter workdays but could still mean working at least seven and a half hours a day outside. If the weather was especially bad, workers might get reassigned. In 1786, after eight inches of snow fell all of the women were assigned the indoor task of “picking the Wild Onions from the Eastern shore Oat for seed.”3 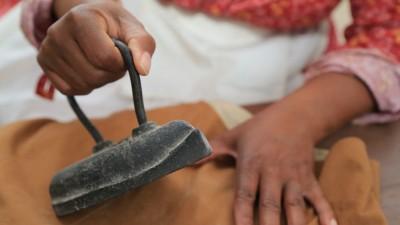 Regardless of the season, daily life at Mount Vernon for the enslaved community was hard.

Thompson, Mary. “The Only Unavoidable Subject of Regret”: George Washington, Slavery, and the Enslaved Community at Mount Vernon. Charlottesville: University of Virginia Press, 2019.