1. In 1774, colonial Americans had the highest standard of living on earth

According to historian Alice Hansen Jones, Americans at the end of the colonial era averaged an annual income of £13.85, which was the highest in the western world. American per capita incomes compared to an average of £10-12 in the British homeland and even lower in France.

The average for free whites came in at approximately £16, whereas indentured servants made roughly £9 and slaves £7. (Of course, most owners did not pay slaves for their labor—their income is determined by the market value of the clothing, food, and shelter they received from their owners). When considering only free whites, the South stood as the richest region (with an approximate annual income of approximately—≈—£18), followed by the Mid-Atlantic (≈£16.55) and then New England (≈£12.80). However, when counting the entire population, the Mid-Atlantic came out on top (≈£15.79), followed by the South (≈£13.63) and then New England (≈£12.61).

2. The average tax rate in colonial America was between 1 and 1.5%

Colonial and Early Americans paid a very low tax rate, both by modern and contemporary standards. Just prior to the Revolution, British tax rates stood at between 5-7%, dwarfing Americans’ 1-1.5% tax rates.

Well into the 19th century, Americans favored “indirect taxes” such as import tariffs rather than “direct taxes” such as excise taxes (that is, taxes on specific goods like whiskey or paint) or land taxes. While tax rates did climb significantly after the Revolutionary War as states struggled to repay their wartime debts, they came nowhere close to modern rates. That said, Americans received little-to-no government services. Americans constantly lamented their lack of civil services, protection (or lack thereof) on the frontier and high seas, and poor roads and infrastructure. 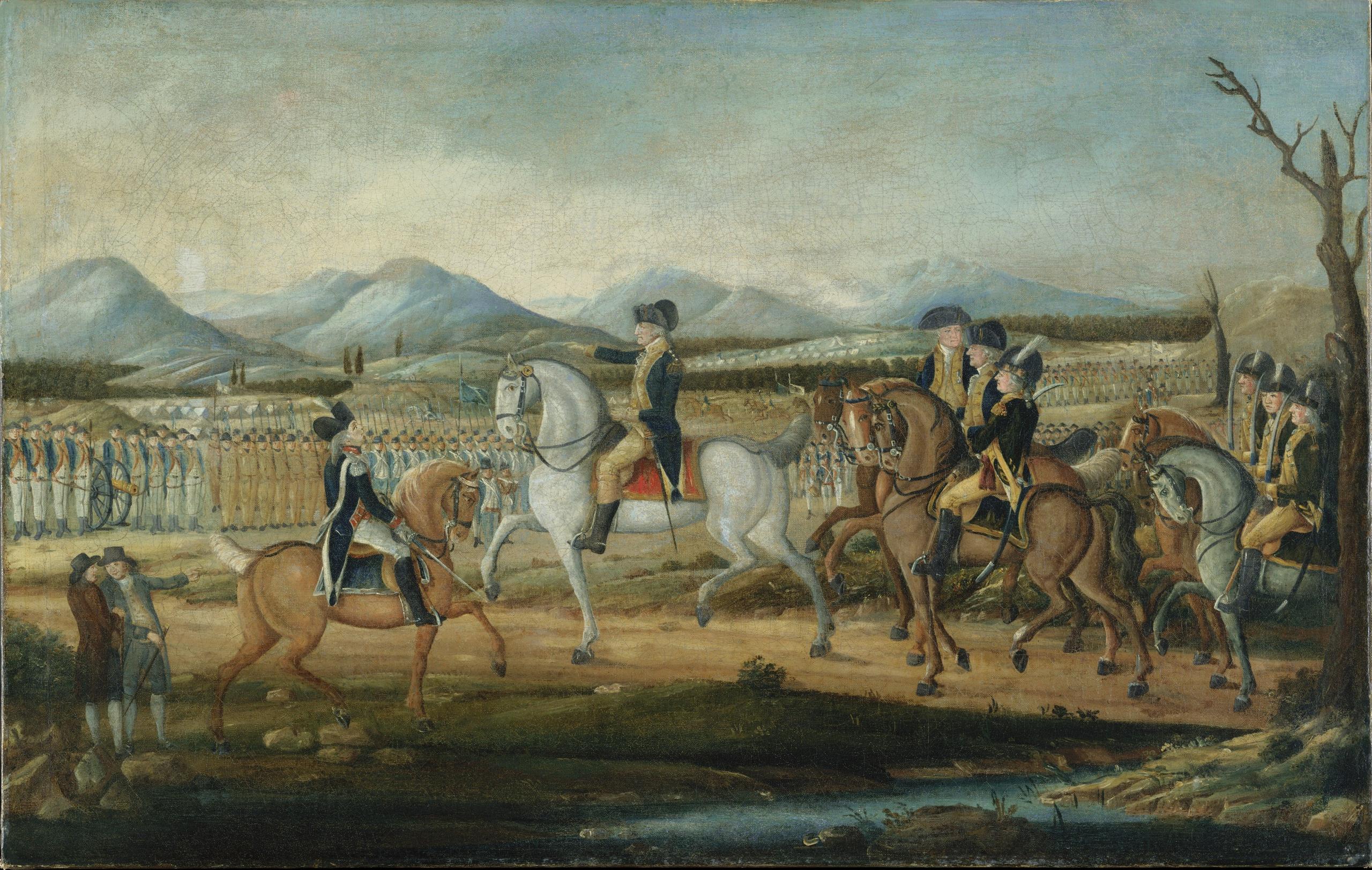 3. The Depression of the 1780s was as bad as the Great Depression 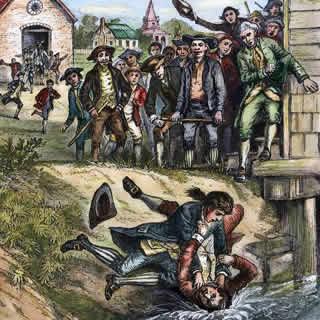 Between 1774 and 1789, the American economy (GDP per capita) shrank by close to 30 percent. Devastation of real property, a contraction of the labor force due to war deaths and injuries, the cessation of British credit, and exclusion from markets in Britain and West Indies resulted in widespread economic collapse. While the Treaty of Paris in 1783 resulted in a short boom in commercial activity, markets again quickly crashed due to a lack of cash, credit, and markets. New York City merchant Anthony L. Bleeker said in 1786, “As money [has] become exceedingly scarce and business very dull, the shopkeepers, country dealers, &c. are very cautious and backwards in buying; and it is really very difficult to make sales to any tolerable advantage, especially when immediate payment is required.”

4. The US’s largest European trading partners in the late 1790s were the German city-states of Hamburg and Bremen 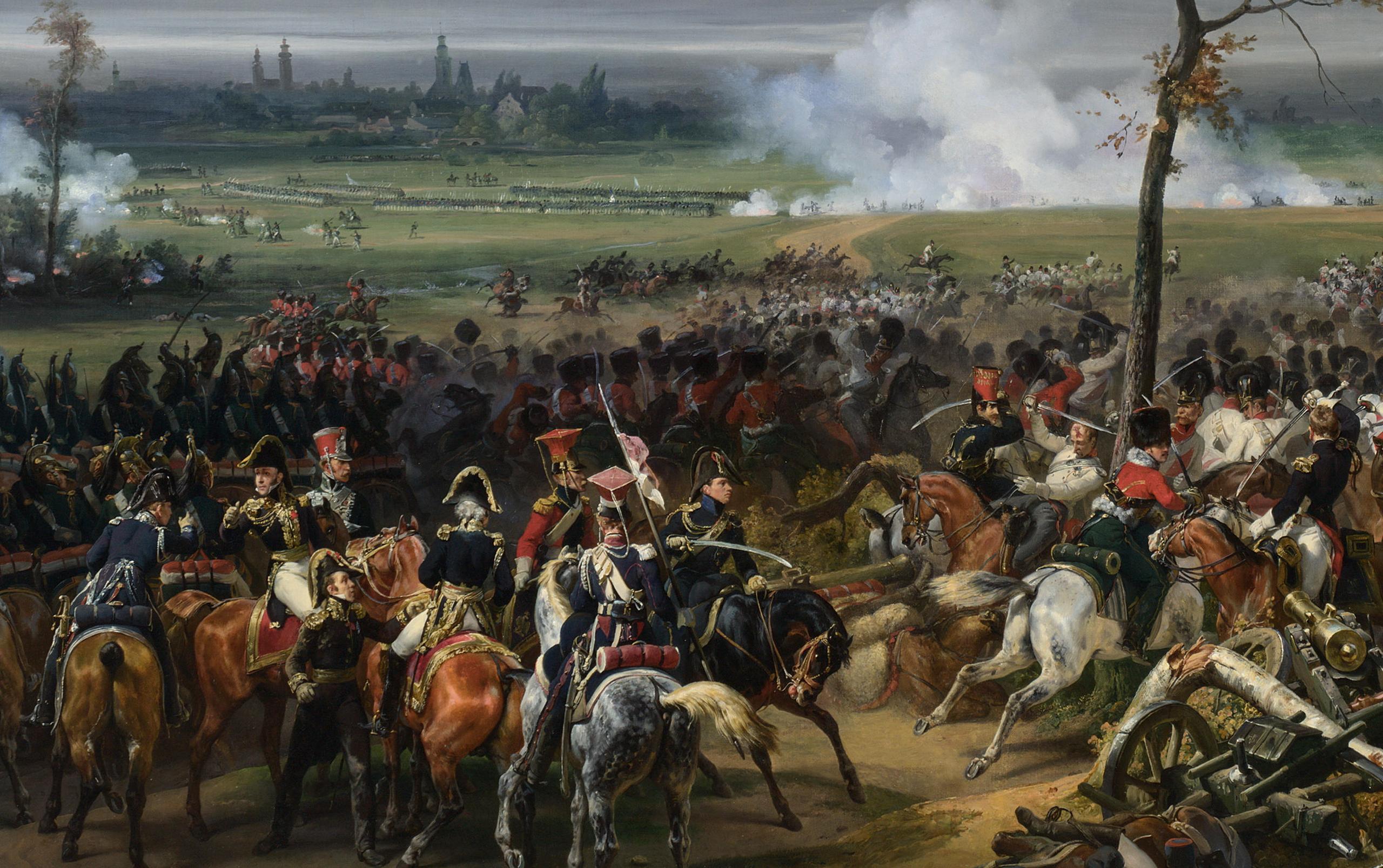 American trade with the Hanseatic city-states of Hamburg and Bremen boomed with upon the outbreak of the Napoleonic Wars. As late as 1792, American commerce with Hamburg and Bremen barely existed, matching that of insignificant trading partners like Norway and Denmark.

However, when the French Revolution broke out in 1793, American merchants quickly made the German ports their principal European entrepôt. Hamburg and Bremen offered a liberal and American-friendly haven in a chaotic and war-torn Northern Europe. American merchants shipped vast cargos of coffee, sugar, and tobacco to the Hanseatic ports in return for German linen and other manufactured goods Unfortunately, a violent financial crisis struck the German city-states in the summer of 1799, leading Americans to take their business elsewhere. Nevertheless, the Hanseatic ports served as the locus of American trade in continental Europe throughout the booming 1790s.

5. Alexander Hamilton executed the first financial bailout in US history in 1791

During the late summer of 1791, the first financial panic in American history erupted in Philadelphia and New York. Fueled by widespread speculation, stock of the new Bank of the United States (BUS) rose from its $25 opening price on July 4 to $312 in Philadelphia on August 11. That same day, the bubble burst in New York and panic quickly spread to Philadelphia, resulting BUS shares losing half their value in less than 48 hours. Facing the prospect of financial and political catastrophe, Treasury Secretary Alexander Hamilton quickly orchestrated the first financial bailout in American history over the weekend of August 13-15, 1791. Through proxies in New York and Philadelphia, the Hamilton Treasury injected a total of $560,000 into financial markets, the 2011 equivalent of between $12.6 and $80 billion. Hamilton had to execute a similar plan just over six months later, when financial markets collapsed again in the spring and early summer of 1792. 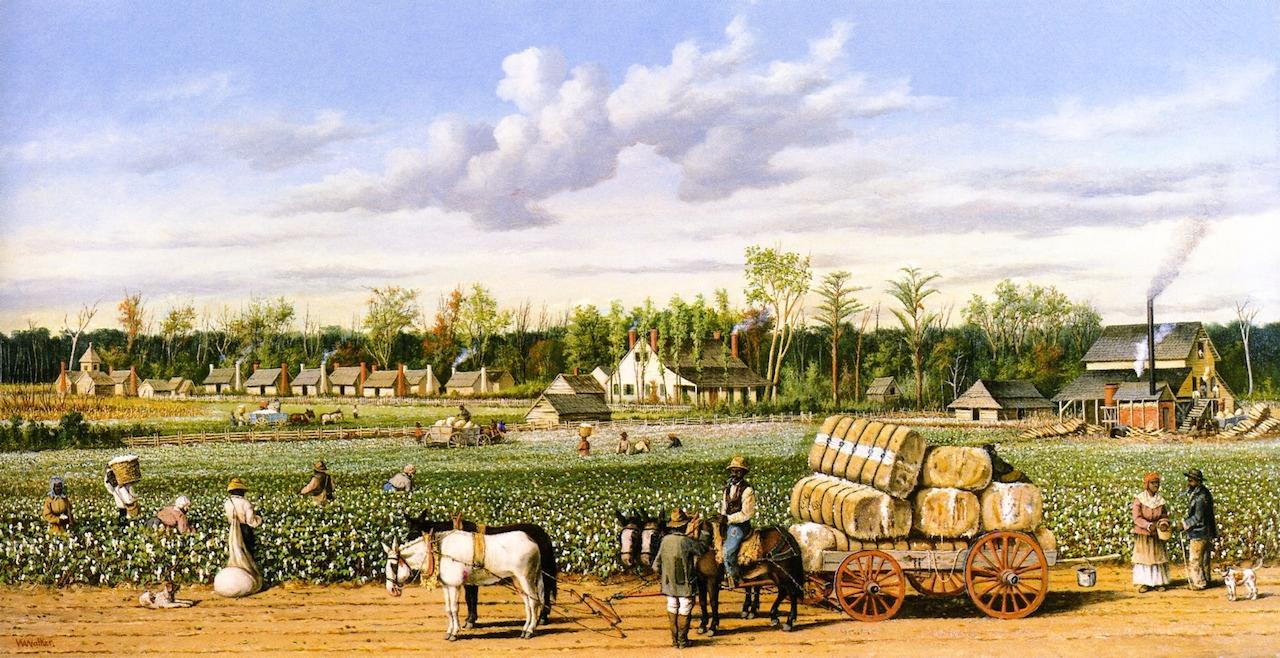 In the years leading up to the Revolution, cotton production comprised a negligible part of the America economy. With American agriculture focusing on tobacco, wheat, rice, and other cash crops, Americans exported an average of just 29,425 pounds of cotton for the years 1768-1772. Just 30 years later in the period from 1804-1806, Americans shipped 36,360,575 pounds of cotton to markets in Great Britain, continental Europe, and all over the globe. The invention of the cotton gin in 1793 compensated for the high cost of labor in America by allowing one person—most often a slave—to clean 50 times as much cotton in one day as they would have been able to without it. This technological advancement allowed plantations to produce and process inferior “upland” cotton in the vast interiors of the American south.

7. After the Revolution, American traders flocked to the Far East

Before the Revolution, British mercantile regulations strongly discouraged American traders from conducting business with the Far East. British state-sponsored firms like the East India Company held monopolies on eastern commodities like tea and spices, while shipping regulations required that most American goods flow through London or Glasgow before moving on to their ultimate destination. 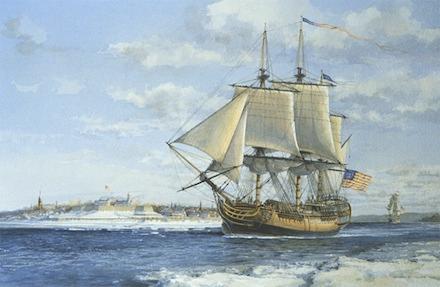 Independence from Britain abolished those restrictions, and Americans immediately began preparing for trips to India, China, the East Indies (modern day Indonesia), and other locations in the region. The first successful American ship to the Far East, The Empress of China, departed in 1784 and returned a year later with a cargo that yielded $35,000 in profit. While the Far East trade yielded much more hype than actual profit, early American traders became obsessed with the prospect of riches from the China and India. “We are mad for India trade,” New York merchant William Constable wrote on November 5, 1789. For Constable, “mad” may have been the perfect word. While Far East voyages took up a considerable amount of his time, energy, and resources during the 1780s, Constable’s forays to China and India only resulted in deep losses by the time he quit the trade in 1792.

8. The US did not have an official, state-sanctioned currency until the Civil War 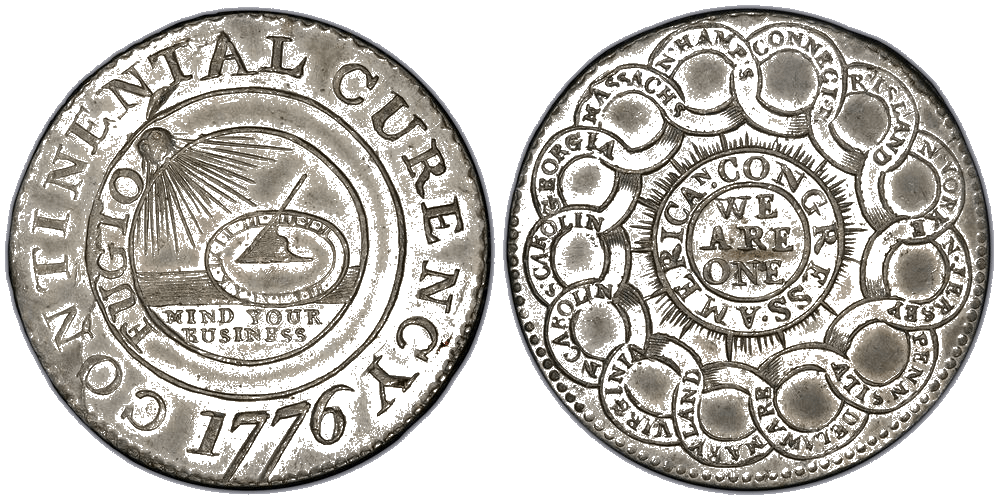 Upon the advent of the Revolution, Congress tried to repay its debts with the “Continental Dollar,” but without the power to tax or mandate its acceptance, the currency quickly lost its value.

The monetary situation did not get much better after the Constitution. While the Constitution prohibited states from issuing their own currencies and subsequent establishment of the Mint set the weight of gold that comprised an official US dollar, most of the new nation’s money supply came from notes issued by individual banks. During the years leading up to the Civil War, hundreds if not thousands of different types notes comprised the nation’s money supply. In fact, several companies in the 1830s published large, illustrated guides that rated and valued all the nation’s bank notes. 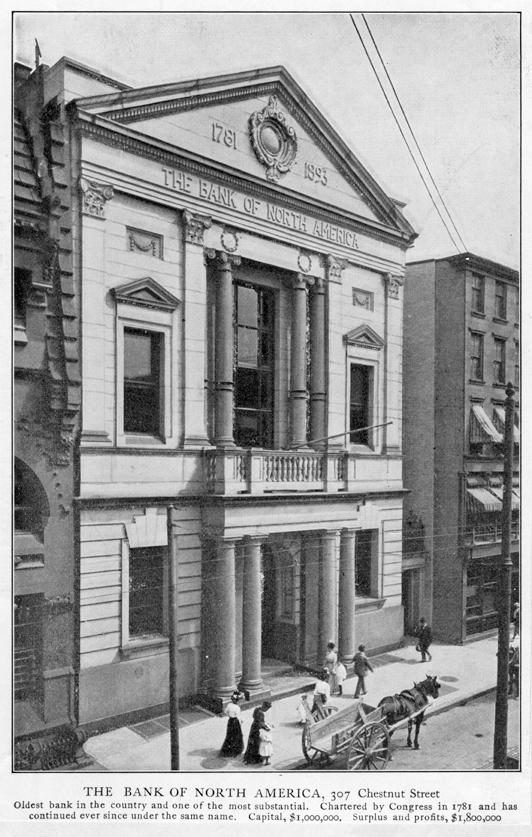 The oldest bank in the United States, Philadelphia’s The Bank of North America, formed in 1781 to finance supply procurement for the Continental Army upon the collapse of the Continental Dollar. Two other banks followed in 1784: the Bank of New York, started by Alexander Hamilton, and the Massachusetts Bank in Boston.

All three institutions took deposits, “discounted” bills of credit—essentially cashed checks for a small percentage of the total value—and provided loans to merchants. Up through the 1780s, state-run “land banks” provided mortgages on improved parcels of real property. However, it was not until the establishment of the Bank of the United States in 1791, and the proliferation of its competitors in coastal cities such as Baltimore, Charleston, Savannah, Wilmington, Providence, and Alexandria, that most major American cities had at least one bank. Nonetheless, only 29 banks existed in the United States by the year 1800. 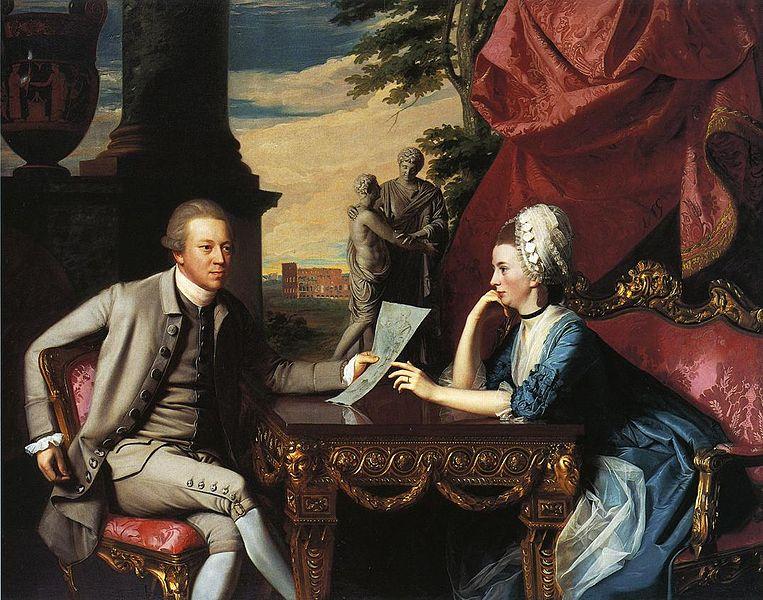 While women faced legal strictures that masked their participation in the early American economy, they shaped the consumer market and provided the investment that stabilized government financial and propelled industry. As the most common purchasers of household items, women’s tastes dictated which goods merchants imported and sold in shops and that farmers brought to market. Women also drove production by managing plantations, shops, and even iron foundries. Perhaps even more important, women invested in land, stocks, and US government bonds. In fact, during the 1790s women executed at least 10% of all financial transactions, including complex stock deals and debt speculation schemes.

In 1791, Congress approved a new, federal tax on spirits and the stills that produced them which sparked a conflict that threatened Washington's new government.